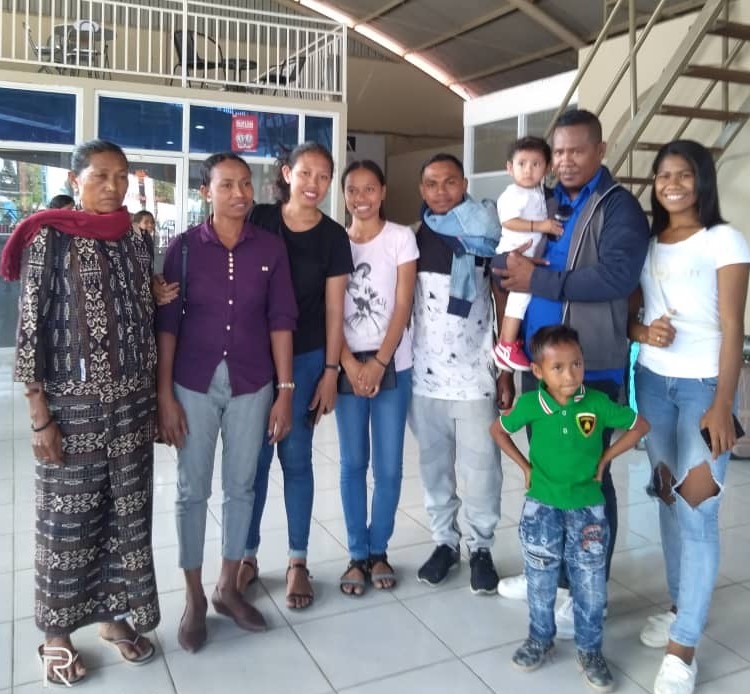 Cornelio with his family in Dili, Timor-Leste.

My name is Cornelio Dos Santos, but most people call me Nelio. I was born in Suko Lepo in Covalima, a long day’s drive over the mountains southwest from Timor’s capital Dili.

Like many other people in Timor-Leste, my family is large and when I was a child we mostly lived off the land. Dad tended his gardens, mum looked after us kids. There were a lot of us – I was the oldest of six, four girls and two boys. Although we were very poor we did have time, and each other. I have many happy memories from those days.

Because I was the oldest boy it was very important to my parents that I get a good education. It was a matter of pride to them that someone from the family would earn a comfortable living. I started off at local schools, but eventually they made the difficult decision to send me away to an agricultural college in Maliana. I was there for three years and it wasn’t easy. Not only did mum and dad worry about me being away from home, but they struggled to pay the school fees. They borrowed money, grew produce for the market and even started selling off their livestock. It was hard, but I was the oldest son and it was so important to them that I graduate.

With their help, in 2013 I did graduate with grades good enough to start a course in agronomy at the National University of Timor-Leste. Once again though, money was a problem. I was living in a boarding house (kost) which cost $50 a month! In that, and all sorts of other ways, Dili was expensive, but once again mum and dad were determined I would graduate. They continued to somehow scrape together what was needed and I kept on making the most of being there.

While I was at university in Dili I started volunteering with different NGOs and learning languages. I wanted to become someone capable of giving back. As for the languages, they’re like a bridge to the outside world and all its knowledge. I studied English, Portuguese and Esperanto. Perhaps due to good luck, or perhaps due to all the hard work, in 2017 I managed to win a scholarship to spend a semester studying agronomy in Portugal.

In 2019 I was writing up my final thesis when I happened to see an online announcement from the Secretary of State for Vocational Training and Employment (SEFOPE) saying they were looking for people to work in Australia for three years with the Pacific Labour Scheme (PLS). It seemed like a rare opportunity so I got to work getting my CV and all my documents in order and emailed off an application. I heard that nearly a thousand people had the same idea. Somehow I was one of the first group of 25 selected to go and work in meat processing with the Midfield Group in Warrnambool.

We arrived in August 2019, not too long after I submitted my thesis. The work could be tiring, but our accommodation was nice, and we were happy to be able to start earning some money. After all the anxiety they had in supporting me through school, finally I was able to start helping my parents and siblings. At the moment, as well as buying food, a lot of what I send back goes on education for my brother and sisters.

I’ve enjoyed my time in Australia so far. The landscape around us is beautiful. We’re not far from the beach and there are some great bike paths. We’re a walk from the shopping centre and the church, and with the kind help of Midfields some of us even studied for and got drivers licences. It’s also been very interesting to get a chance to learn about Australian culture, economy and way of life. Through work and our local parish (Hi Amu Lawrence!) we’ve made new friends from here and all over the world.

In early 2020 the COVID-19 pandemic descended upon us. Midfields took the situation very seriously from the start. Hand washing, mask use and social distancing were all strictly implemented. In late July they even made the costly decision to shut for a week while everyone got tested after an inspector who visited turned out to be infected with the virus. So far, following these precautions, we have continued to work and been okay. More recently there have been reports that Midfields might have to shut down for a month or two due to state government restrictions. We hope it doesn’t come to that.

As for how we’re feeling about it all – it has been challenging. We can’t move around like we could before the pandemic so we tend to spend more time in our accommodation. At times like this we especially miss our families, but of course going to visit them is also impossible. That said we’re very grateful to the community here in Warrnambool, in particular Midfields, who have been really good about supporting us at this difficult time. They’ve made us feel a little less far from home, almost as though we have family here too.

So although things are tough, we’re confident of getting through it. Most of us still have another two years left on the PLS.

My plan is to work as hard as I can while here, both saving money and sending some back. I don’t have a wife or kids yet, so the first thing will be to build a new house for my parents and invest in some sort of agricultural business, something small at first. They’re farmers and I have a degree in agronomy. We can build on that. I would also like to get my Masters.

I believe that if we want to move from poverty to prosperity it’s going to take initiative and discipline. Like anything in life, work here has its challenges, but my friends and I are grateful for the opportunity.

Cornelio Dos Santos has a degree in agronomy from the National University of Timor-Leste and currently works for Midfield Meats in Warrnambool in Victoria.