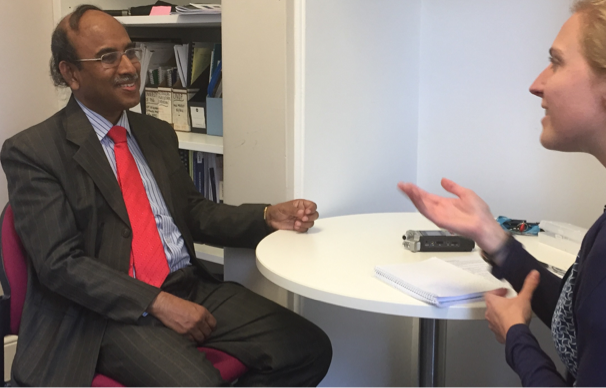 Dr Muhammad Musa is the Executive Director of BRAC, the Bangladesh-based international NGO that has grown to become the world’s largest NGO (by number of employees). During a recent trip to Australia sponsored by DFAT, Dr Musa met with Camilla Burkot to share some insights from BRAC’s experience of pursuing financial self-sustainability, developing and scaling-up evidence-based programs, and the changing nature of NGO partnerships. You can listen to the podcast here, or read the full transcript here. For an abridged version of their conversation, read on.

Camilla: I understand a key focus for BRAC now is on becoming more financially sustainable. Could you tell us more about that?

Dr Musa: The key question is, sustainability for what? We have to keep in mind the purpose for which BRAC exists. We exist because we have a mission. We have a clearly defined purpose: we want to make a difference in the lives of people who live in poverty. So, while we look at financial sustainability, we must make sure that the purpose is not sacrificed.

As you know, funding for humanitarian and development work traditionally used to come from Northern donor agencies, primarily from governments like the Australian, UK, and US governments, but also from multilateral agencies and foundations like Gates Foundation and others.

That scenario has been changing, for many reasons. But the situation we’re finding that the there is a shrinking of foreign aid, and also a refocusing of foreign aid according to donors’ strategic purposes.

Therefore, we have been working to really focus on financial self-sustainability, simultaneous with maintaining program quality and impact. Where in the past we could draw on the resources from donors for some of the programs that we used to do – in health, education, and even skills development programs for youth – we will no longer depend on donors.

Instead, in a changing context where the economy has been growing and where our people have been moving out of poverty, we are examining their ability to pay. We are segmenting the population, and offering them choices with higher quality, so that they can act as respectful consumers and buyers, rather than just recipients of free services or ‘beneficiaries’.

So, it’s a kind of paradigm shift. It’s a shift where we are changing people from the status of beneficiaries to customers, and that fits very well in the market economy where people’s socioeconomic situation has improved.

Camilla:  Could you give me some examples of this new approach you are taking?

Dr Musa: BRAC has been running 35,000 primary schools, focusing on students who drop out of primary school or who never went to primary school, and on girls’ education. We ran those free of charge. They are one-classroom schools where girls and boys come in and receive teaching from grades 1 to 5, covered in four years and with a very good success rate. The dropout rate has reduced, the enrolment rate has increased, and government school programs are coming in.

We are still running some primary schools, but now in a multi-classroom way, where students from multiple classes can come in. We found this is something for which there’s a demand, and we costed it.

We determined that the cost of running these schools is something like 300 Taka [approx. AUD$5] per child per month. And we figured out the ability and willingness of families to pay. So we set a target by which we will be recovering some of the costs – not 100 percent of the costs, we will not charge 300 Taka – but we are charging 100 Taka. The parents pay 100, we subsidize 200. We call this the cost recovery model.

On the other hand, we have identified certain products and services for which there’s a market and you can develop a social enterprise in a way that it will generate surplus. For example, we found out there’s a demand for eye healthcare. So we launched a new eye healthcare program where we are setting the fees for services so that the segment of the population who need eye healthcare and can afford it pay a fee which is higher than the costs we have. We use the surplus to support programs for which cost recovery or social enterprise is not possible, like gender equality programs.

Camilla: I read that one of the reasons that BRAC first pursued social enterprises was to generate funds to support running pilot programs and experiments. These days this kind of innovation and experimentation is becoming the norm in development – in that respect BRAC was a bit of a trend-setter.

Dr Musa: From the very beginning, in 1972, the approach our founder Sir Fazle Hasan Abed took is to start with ideas or lessons from the field. Pilot it or test it in a small scale. Then learn from it. Adjust, readjust it. And then when something is working, take it to scale. Sometimes taking to scale means having to adjust it and do it in fairly different ways, keeping the main concept and purpose in mind.

So yes, you are right. Innovation is part of our DNA. We focus more on social innovation rather than technological innovation, and it’s more innovative approaches rather than creating innovative tools and techniques, although there are times when we do that. And we consider ourselves to be a learning organization. That’s one of the things we want to boost up in the coming days.

Dr Musa: There was a time when what we meant by ‘partners’ were local community-based organizations. We have 300 such partners in Bangladesh. They seek sub-grants and capacity building support from us. We offer them various standards, train their staff, and then they run programs and we offer technical support. That’s one type of partnership.

This Strategic Partnership Arrangement with DFAT and DFID is another type. We work not as donor–recipient, we work as partners; where DFID and DFAT together bring about 35% of our budget, we bring in 37%, and then we raise the remainder from other sources. We have very highly engaged in developing our results framework together, and figuring out in that framework what will be the role of BRAC and what will be the role of other partners.

I’ll give another example. We have a program called Ultra-Poor Graduation program, where we focus on those women – they’re mostly women – who are not only economically the extreme of the extreme poor, but they’re also socially ostracized. We work with them for two years with a package of six or seven different services, sequenced in a way that builds the capacity and ability of each woman to move from a state of economic and social disempowerment, to one where they have sustainable growth and income of their own and changed social position.

When an evaluation done by London School of Economics found that the program was successful, then CGAP, a project of the World Bank, partnered with us. They took that model and adopted it in many other countries. Altogether they did 10 programs in 8 countries, and we acted as a kind of technical assistance group to some of these.

So, the range of partnership is now much wider. No one organization, no government alone, can address poverty and social injustice. It requires partnership between government, private sector, civil society organizations like us, funding agencies like DFAT and DFID, but also academics and researchers, media – together we make a difference.

Camilla: On the topic of government, sometimes there’s the critique that NGOs become so good at delivering services and programs, like the Ultra-Poor Graduation program, that they effectively let government off the hook.

Dr Musa: It’s a very valid point. Depending on the context, there’s a requirement to change the approach and strategy. We began the Ultra-Poor Graduation program based on our learning when we had been partnering with government on a social protection program called Vulnerable Group Feeding Program.

It was a social protection program, and we found out that participants of the program were fine when they were part of the program, but they weren’t growing economically. Their situation was not sustainably changed. That learning led us to design the Ultra-Poor Graduation program.

Over the last 10 years, we have refined that strategy and expanded it to many countries. We have proven, scientific evidence showing that it works, that we have helped 1.7 million households graduate out of extreme poverty.

But the ultra-poor are 8% of [Bangladesh’s] population, 10-12 million people. That is not something BRAC alone can deal with. Now is the time when government should come up. So we’ll be encouraging the Ministry of Finance of Bangladesh to allocate resources and take this model, and other models of social protection, and shape it in a way so it can be owned by the national government and their staff. We will continue to provide technical assistance and standards, help them to develop a monitoring system, ensure that graduation is really happening, and ensure accountability of the resources being used.

But moving ahead, in a market economy we don’t think the government alone should be the one replicating things. So we’re also advocating with the private sector. Government should have some responsibility for some social groups, but many social groups can be supported by private sector as long as we ensure that the minimum basics and rights of the people are maintained.

Dr Muhammad Musa is the Executive Director of BRAC. Camilla Burkot is a Research Officer at the Development Policy Centre.