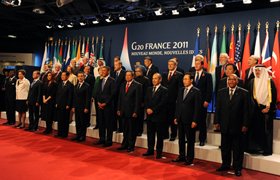 It was only at the Seoul G20 leaders’ meeting last year that development first got onto the G20 agenda with the production of the Seoul Development Consensus.

It is certainly one of the main advantages of the G20 – which accounts for 85 per cent of the global economy and two-thirds of the global population – that it provides a unique and strategic platform for the discussion of development objectives, pulling together the views of both advanced and emerging economies.

President Sarkozy announced early on (in January 2011) that development would be one of the main objectives of the G20 under its presidency, and that Africa would be a priority.

But it has been a long and difficult year for France and the rest of Europe. As recent developments in the Greek debt crisis came to resemble the final act of a theatrical tragedy, it was inevitable that the G20 Leader’s Summit in Cannes on 3-4 November came to be overshadowed by European fiscal woes. What then happened to the development agenda?

In a clever move to give the issue profile, Sarkozy had asked Bill Gates to write a report for G20 leaders, Innovation with Impact: Financing 21st Century Development. Gates took up three main themes: encouraging innovation through new partnerships; expanding both domestic and international resources for development; and doing more to involve the private sector in development efforts.

Gates’ strongest plea was a simple one –  even with a crisis, don’t cut aid:

There’s a lot of pressure on aid budgets given economic conditions, but aid is a very small part of government expenditures. The world will not balance its books by cutting back on aid, but it will do irreparable damage to global stability, to the growth potential of the global economy, and to the livelihoods of millions of the poorest people.

The Gates report estimated that if traditional donors met their aid commitments, it would generate an additional US$80 billion annually from 2015. He called on G20 countries to commit to a tax on international financial transactions, with a portion of the money raised to be invested in development. Up to US$48 billion could be raised from such a tax, and US$9 billion dollars if it was only enacted in the larger European economies. He also suggested that other taxes, such as one on tobacco or international transport fuels, could be used to finance aid.

The content of the Gates report was not a secret going into Cannes. A draft had been discussed in Washington in September 2011, at a G20 ministerial meeting on development. No doubt, countries had lobbied to include some proposals, and already indicated that they would resist others.

Not surprisingly therefore, not all of the proposals in the Gates’ report got up. On the financial transactions tax the final G20 communiqué merely stated: ‘We acknowledge the initiatives in some of our countries to tax the financial sector for various purposes, including a financial transaction tax, inter alia to support development’. This was not unexpected– the proposal was supported by the French, but opposed by the US, Britain and Australia, among others.

On the issue of greater transparency by multinationals, particularly in mineral and resource investment, the communiqué also fell short of full endorsement of Gates’ proposal that all G20 countries should ensure that listed mining and oil companies on their stock exchanges disclose payments to foreign governments. Rather, the communiqué simply stated that ‘we urge multinationals to improve transparency and full compliance with tax laws’.

Yet, the Summit did deliver some progress on the development agenda. The communiqué reaffirmed that official development assistance remains critical to meet the Millennium Development Goals, and countries agreed that existing aid commitments should be met.

In addition, the G20 agreed to take further, if modest, steps to enhance food security. The G20 agreed, for example, that food aid purchased by the United Nations World Food Programme should be exempt from export restrictions and ‘extraordinary taxation’, though said nothing about the wider practice of imposing export restrictions on agriculture, which is at the heart of the food insecurity problem.

The communiqué also endorsed the Gates recommendation to reduce the average transaction cost of remittances from 10 per cent to 5 per cent by 2014. This is expected to save an estimated $US15 billion annually for recipient families.

So while the Greek debt crisis, akin to the almost insurmountable labours of Heracles, unavoidably dominated discussions at Cannes G20 Summit and the media write-up, it didn’t knock development issues right off the G20’s agenda altogether. There was no dramatic breakthrough – such as a financial transactions tax – to match Sarkozy’s initial ambition, but that was probably always unlikely in any case. Rather, there was some useful if modest progress.

Following the conclusion of Cannes, President Felipe Calderon of Mexico, the host of the 2012 G20 Summit, listed the key priorities for next year’s Summit as stability, international trade, financial regulation, food security and climate change.  Where development financing fits into this, how the agenda will be taken forward by Mexico in 2012 and Russia in 2013 (before it becomes Australia’s responsibility in 2014), and whether the G20 will heed its own call to meet pre-existing aid commitments remains to be seen.