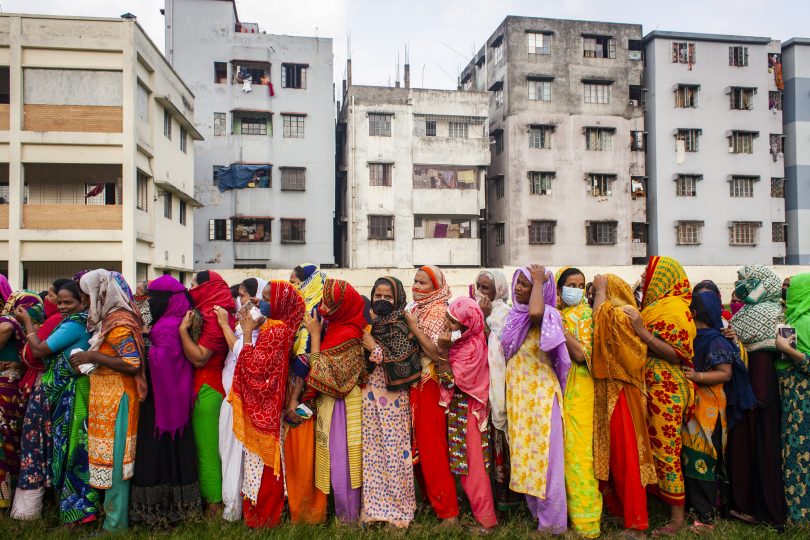 Women queue for relief items in Dhaka during the coronavirus pandemic, May 2020. (UN Women/Fahad Abdullah Kaizer)

Let’s face it, for most of the world, 2020 wasn’t an easy year. Both aid recipients and donors struggled to weather the human and economic costs of COVID-19. As a result, the need for aid rose, while simultaneously the ability of many OECD donor countries to give aid fell.

What did this mean for global aid flows?

Last night we got an early answer to that question, as the OECD’s Development Assistance Committee (DAC) released data on Official Development Assistance (ODA) in 2020. These data are preliminary – they are liable to be revised. They also aren’t truly global: China for example doesn’t report on its aid to the OECD. (Some other non-DAC donors do report to the OECD, but in this post I focus on DAC members so as to avoid data issues.) Yet the data do give us some sense of whether domestic need in donor countries is trumping global need when it comes to aid spending.

Following aid trends is harder than usual at present because the DAC is in the process of changing how ODA is counted. Their preferred measure used to be Net ODA, which was grants plus concessional loans, minus any repayments on previous concessional loans. Now their preferred measure is Grant Equivalent ODA, which is grants plus the estimated value of any loans given today minus the discounted future worth of anticipated interest and loan repayments. (If this fascinates you, read more here.)

Fortunately, the direction of the change last year is the same regardless of which method you use to calculate ODA. The chart below shows trends in ODA for both measures. 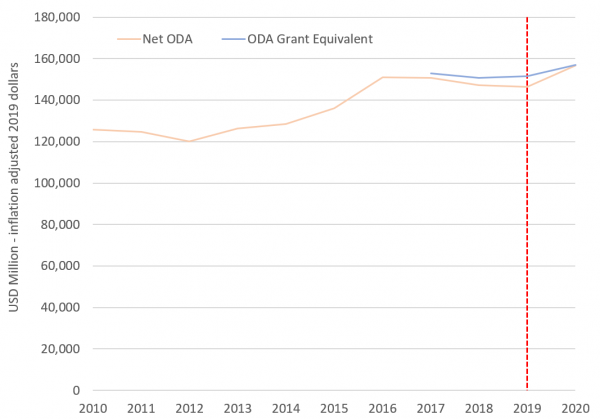 Aid has gone up! The rise is more dramatic if you look at Net ODA, which I think is because some donors have suspended loan repayments (from the data it seems to be France and Japan in particular, although I’m not certain). Regardless though, for both measures, there’s an increase. If you look at Net ODA, for which we have a longer series, the increase is a clear break from a steady trend of decline since 2015.

Of course, what’s true for donors as a whole won’t necessarily be true for individual donors. You can see this below. It’s a histogram of percentage changes in ODA between 2019 and 2020 for different donors. (The measure used is Grant Equivalent ODA – the picture is worse for Net ODA, although still similar.) 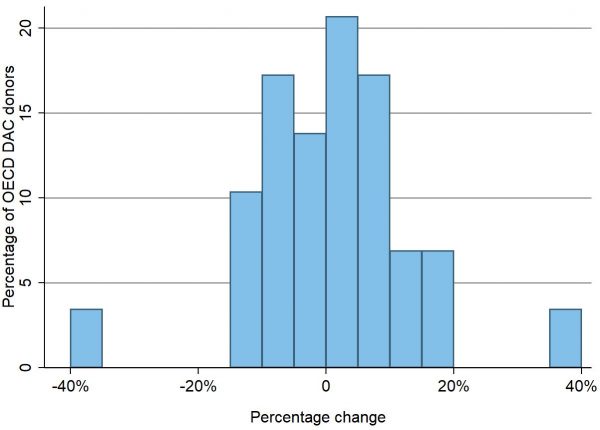 All told, 16 donors’ aid went up; 13 donors cut aid. For most donors the change was fairly small, although there is the odd outlier (Hungary’s aid went up by about 40%; Greece’s aid fell by about 40%).

Of course, not all donors are equally important, and it was a small group of big donors that drove the change in overall aid. In particular, increases in grant equivalent ODA from Germany (a 14% increase), the United States (a 5% increase), France (an 11% increase) and Sweden (a 17% increase) were behind most of the total rise. (These countries, alongside Japan, were also the main source of the increase in Net ODA.) Were it not for this small group, global aid would have fallen – thanks mostly to large aid cuts from the United Kingdom (whose aid fell by 10%).

That’s the global picture, but what about Australia? According to the OECD data, Australian aid fell by nearly 11% in 2020, regardless of the measure used. (This is a larger percentage decrease than the UK above, but its contribution to the global total is less, as the UK is a much bigger donor.) News of a fall in Australian aid may seem odd in light of recent budgeted increases. But these increases are for the current financial year, and come from an unusual budget released late in 2020. It’s unlikely that much of the new aid money would have made it out the door by the end of the 2020 calendar year.

Overall, global aid is up. But what’s true of the whole is not true for all donor countries. At the country level, 2020 was a very mixed year for changes in aid. Some important donors did well, other donors – like Australia – did not. Although as Australia’s case hopefully shows, it’s not too late for wealthier countries to react to the COVID crisis by increasing their aid budgets. Sure, 2020 was a tough year for aid donors, but aid is only ever a tiny fraction of government spending in OECD countries. Wealthy donors can bear the cost of reasonable aid increases. Coronavirus has hit the developing world hard. And aid – if given well – has an important role to play in funding a global recovery.

Note: The data set I created and used in this post can be downloaded here. The OECD’s short report on their data release is useful and can be accessed here.