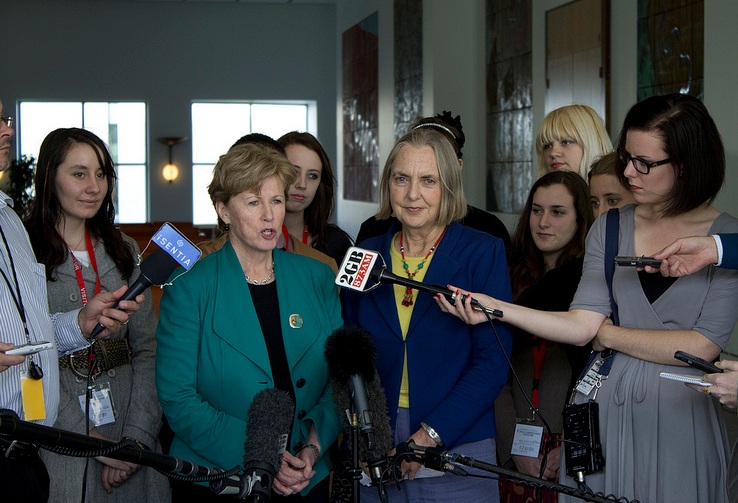 The UK’s coalition government deserves praise for the handling of its aid program in recent years. With its transparency and value for money agendas, and notably the mid-2011 setting up of the Independent Commission for Aid Impact, the UK is working harder than most on improving its aid quality. More recently it has also taken the lead in aid quantity, massively increasing its aid spend to reach the UN target of 0.7 per cent of Gross National Income (GNI) this year.

Yesterday Greens Senators Christine Milne and Lee Rhiannon launched their proposed Overseas Aid (Millennium Development Goals) Bill 2013 (reported on here and here. The Bill itself will be available here in the coming days). Taking lines straight from the UK Tories’ playbook, the Bill seeks to legislate a commitment for Australia’s aid program to reach 0.5 per cent by 2015/16 and then 0.7 per cent of GNI by 2020/21 as well as to establish an Independent Commissioner on Aid Effectiveness.

Australia came out of the 2007 elections enjoying bipartisan support for increasing the aid budget to 0.5 per cent of GNI by 2015/16. Aid increased from 0.28 in 2007 to 0.35 per cent in 2011-12, but last year Labor announced  a year’s delay in the scale-up effort and the Coalition removed the time-frame from its commitment to 0.5 per cent altogether. The Greens’ Bill goes beyond this earlier bipartisan commitment with its final target of 0.7 per cent. It also requires that climate finance and asylum seeker assistance in Australia not be counted towards the aid target.

Australia has also in recent years moved some way in the direction of independent evaluation, most recently establishing an Independent Evaluation Committee (IEC) to oversee AusAID’s in- house Office of Development Effectiveness.

The Greens’ proposal again goes much further, with the Independent Commissioner on Aid Effectiveness being granted statutory authority to “consider any issue in connection with Australia’s official development assistance.” The Minister may also request the Commissioner look into a certain issue, but the legislation would in effect give the Commissioner authority to choose their own evaluations. The Commissioner would have the power to draw upon both AusAID staff and external contractors to assist in inquiries. All evaluations would also have to be tabled in Parliament (made public) within 15 sitting days of the Minister receiving the report.

While there are arguments for and against more independence for aid evaluators, the main fear has always been that critical reporting would shut down the aid program. Delinking quantity and quality decisions, as the Green’s Bill does, takes this fear away. Of course, such a delinking only makes sense if you think on average aid is high quality and under-provided, but that’s not a bad generalization.

The main substantive difference between the Australian Greens’ policy and the UK Tories’ one is that the Tories have given up on their original aim to legislate for 0.7 per cent (in the end, they just did it, without the legislation). But to argue whether aid targets should be legislated, or to debate the details of the legislation is to miss the point, which is the very different political contexts in the two countries. Scaling up aid still enjoys bipartisan support in the UK, but seems to have less and less support here. It’s a sad reflection on us that what is mainstream policy in the UK is only advocated by a minority party here.