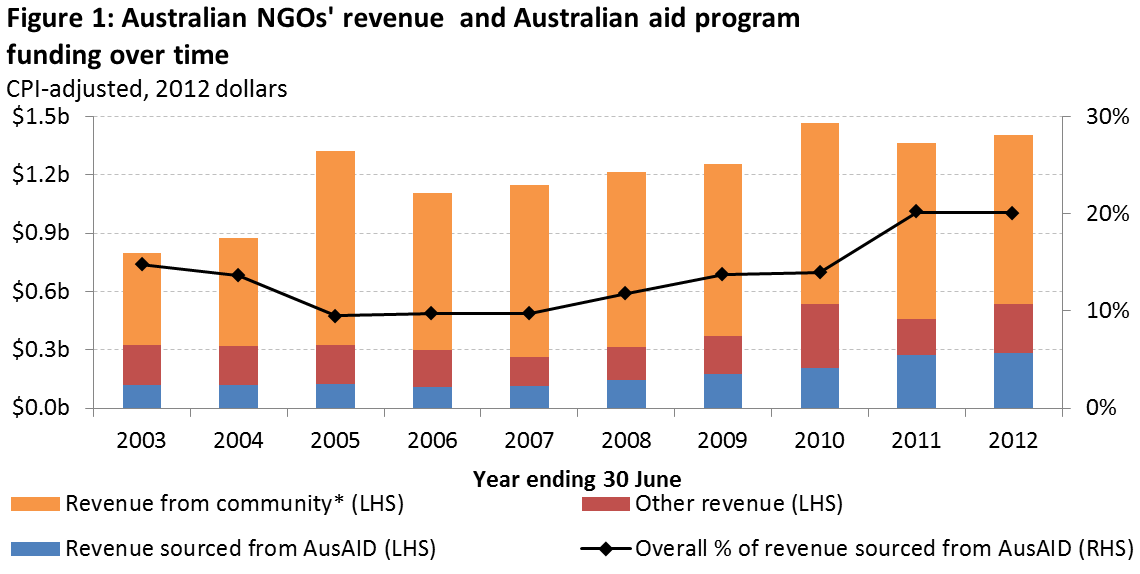 This article is the third in our series on the changing finances of Australia’s development NGOs. This one looks at the significance of government grants to development non-government organistions (NGOs) and the level of NGO reliance on government funding. The analysis is primarily based on data sourced from the Australian Council For International Development (ACFID) and relating to ACFID member NGOs. We have also included data from Médecins Sans Frontières (MSF) and Compassion Australia, which are among Australia’s largest development NGOs, but which are not ACFID members.[1]

The Australian aid program has historically provided funding to a relatively large number of NGOs. Out of the 111 NGOs reporting receiving revenues in 2009/10 to ACFID, 54 received government funding. Assistance is provided in multiple forms, through the Australian NGO Cooperation Program (ANCP), country and sector aid programs, humanitarian funding, and volunteer funding. Assistance is also provided by the provision of tax-deductibility, but that is not examined in this post.

This article takes a quantitative approach. We are not in a position to say what level of reliance of government funding is too high, but it is an interesting question which comes up from time to time (for example, on Devpolicy, here and here), and this sort of analysis is critical to getting a better understanding of it.

It is worth reflecting on the radical nature of this change. Earlier reports indicate that for the decade prior to 2003, levels of government support to development NGOs were stagnant at around $100 million: for example, $86 million in 1998, according to this ANAO report (p.21), and $115 million in 1995, according to the Simons Review (p. 262).

As a result of all these trends, the proportion of government funding to total NGO revenue has risen from 15% ten years ago to 20% today. However, the increase has not been smooth.

Government funding to NGOs only started increasing in 2008, under the Labor Government. (In real terms, funding in 2007 was $112 million, actually below the 2003 level of $118 million (2012 dollars).) A strong increase in NGO public funding in 2005 (associated with the massive response to the Indian Ocean tsunami) led to a drop in the proportion of NGO revenue sourced from the aid program to below 10%. However, in recent years strong growth in aid program funding (20% a year on average since 2007 after inflation) combined with flat public funding (zero real growth since 2007) has led to a doubling in the reliance on government to 20%.

There is enormous variation in terms of reliance on government funding across Australia’s NGOs. The table below sets out the largest 15 Australian international development NGOs, and examines their reliance on government funding as measured by the portion of their revenue sourced from the aid program. The set of NGOs is similar to the top 15 we presented in our first post in this series, but there we took the top 15 based only on community donations, whereas here we have used total revenue. WWF and UNHCR Australia are in that earlier list, but not this one; and AVI and CARE are on this one, but not the earlier one. The 15 are ordered not by total revenue, but by their reliance on government aid funds. 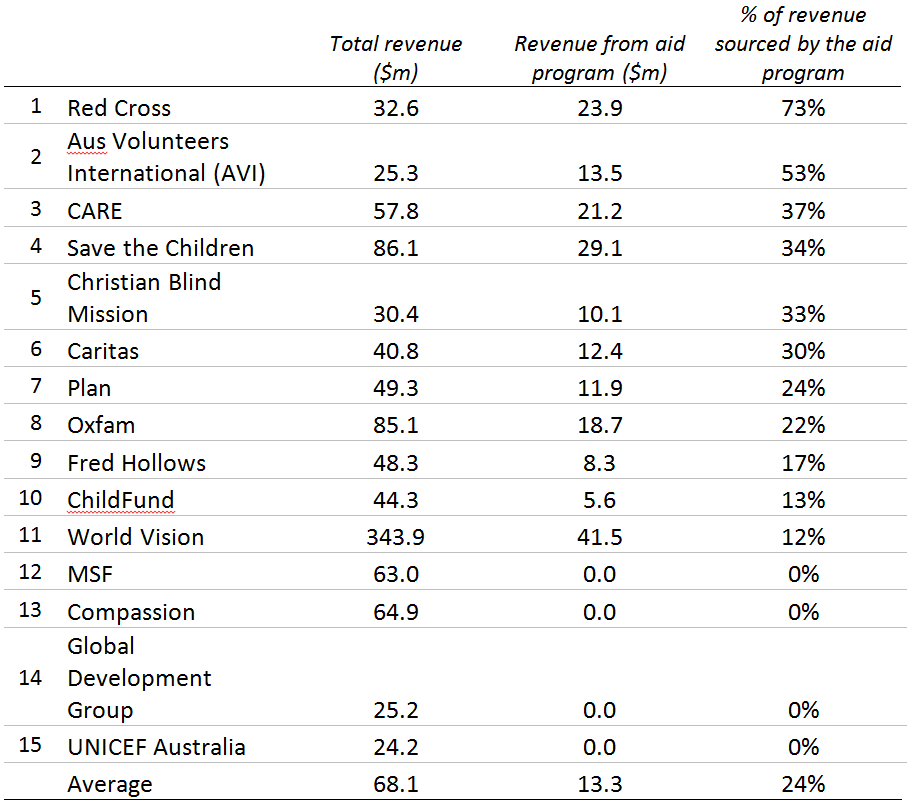 Notable points from Table 1 include:

The overall reliance of Australian NGOs on the Australian government has increased over the last decade after initially falling. This reflects not only the scale-up of Australian aid, but changing attitudes from government to NGOs. The proportion of the Australian aid program disbursed by Australian NGOs fell from 5% in 2003 to 3.3% in 2007, but rose once more to 5.8% in 2012. Although donations from the public also grew rapidly over this period, they did not keep pace with government grants. As a result, the aggregate portion of NGO revenue that was provided by the aid program grew from 15% in 2003 to 20% in 2012.

This is not high by historical standards. An ANAO report from the mid-nineties estimated that Australian development NGOs received about 30% of their income from the aid program (see para. 216 of this report.) However, the aggregate picture conceals considerable variation. Of the 15 biggest development NGOs, 7 have a ratio of government to total funding of below 20%, 8 a ratio of above 20%, and 5 a ratio of a third or more.

The analysis reveals considerable ideological differences in the treatment of NGOs resulting in much more favourable treatment under Labor than the previous Coalition government. The current Coalition government has declared itself to be a friend of Australian NGOs. How this translates into funding decisions remains to be seen.

The data and graphs presented in this analysis are available in this Microsoft Excel spreadsheet [xlsx].

Note: Our earlier blog showed community donations to development NGOs outstripping Australian government aid in terms of growth. It may seem surprising that this blog shows dependency on government support rising. The explanation is that the earlier analysis covered the period from 2000 to 2011. Our data on government support to NGOs only begins in 2003, and so excludes the very rapid growth in public donations in the early part of the last decade.

[1] In 2011/12, these two organizations together accounted for 98% of the revenues of non-ACFID development NGOs, using data from their financial statements.