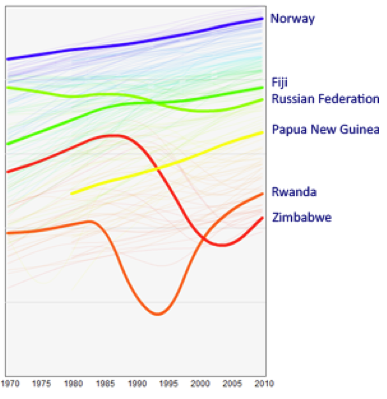 As recently blogged, the Australian launch of UNDP’s 2010 Human Development Report, The Real Wealth of Nations: Pathways to Human Development, took place at the Crawford School on 13 December 2010.

Bob McMullan, present, said a couple of things about Australia’s nearest neighbour, Papua New Guinea. First, that AusAID’s Country Program to PNG is still the largest in the aid programme ($415m to Indonesia’s $325m in 2010-11). Second, that as endorsed in 2009, the fifth priority of the post-Howard PNG-Australia Partnership for Development is ‘developing and implementing a national statistics roadmap’ in PNG.

In context, PNG scarcely reports a single statistical indicator accurately. This leads to nonsense in PNG’s entries in the HDR and a blank against many of the research topics ANU scholars pursue.

For PNG, the topic of food security is well-covered through national nutrition surveys, collaboration between researchers at the ANU, PNG’s National Agricultural Research Institute and elsewhere (a recent synthesis is given in Food and Agriculture in Papua New Guinea, ANU ePress 2009), and papers in the PNG Medical Journal. Despite well-documented, localized  food shortages,  ‘daily calorie supply’, was reported for PNG at around 100% of requirements in HDRs in the 1990s. After 2000, ‘undernourished people as a % of total population’ took its place. This was reported at a belt-tightened 26-29% until 2004, then at a less serious value, and not at all from 2007.

Did Papua New Guineans feast through the 1990s only to starve in the 2000s? No, it is just any attention on the concept of ‘poverty’ in PNG is met with such populist outrage that it is awfully difficult to get empirical data from local reports into international ones. Income poverty – living on less than $1.25 a day – was last reported in the HDR at 35.8% of the population (in 2009) and is now also missing from the current report.

This suggests I might agree with Ron Duncan’s dismissive assessment that the HDR is an exercise in naming and shaming poor performing nations. But I come to the opposite conclusion: it has become a back-slapping exercise in which everyone congratulates everyone else on how well they’ve done while the poor … well, just stay poor.  Life expectancy, a central plank of the HDR indicators, is a good example: with a very few well-known exceptions, it always goes up in the HDR , and PNG’s trendline is no exception (Fig. 1). 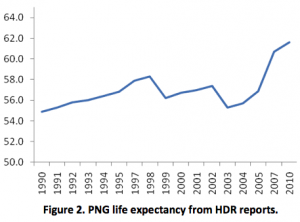 But PNG’s figures for life expectancy in the HDR are made up. The only calculations of life expectancy in PNG from nationally collected data are those of the demographer Martin Bakker: 49.6 years and 54.2 years in the 1980 and 2000 censuses respectively, figures below all points on the detailed HDR graph (Fig. 1). With the HIV-AIDS epidemic taking hold in PNG in the last decade, life expectancy might be going down again: we really have no idea.

The ‘decline’ of the maternal mortality ratio (deaths of women from pregnancy-related causes/100,000 live births) is another example of Dr Pangloss at work. The HDRs claim a remarkable fall in PNG, from 900 to 250 over the 20 years (Fig. 3). 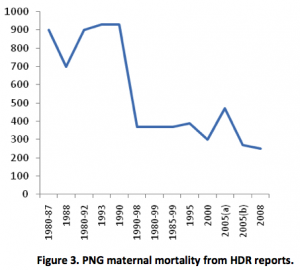 But with no death registration in PNG, where have the figures come from? They are also made up. Glen Mola of the Port Moresby General Hospital, PNG’s expert in these matters, currently accepts a figure of between 700 and 900, for an appalling lifetime risk for women of dying from pregnancy of 1 in 20. PNG has gone nowhere.

Who cares, or who should care, if a national government will not?

I like the HDR a good deal, but the international community owes it to the poor, the victimised and the needless dead to do a better job when governments contrive, by omission or commission, to erase them from statistical view.

John Burton is a Research Fellow, Resource Management in Asia-Pacific Program, at the Crawford School, ANU.

John Burton is an Honorary Senior Lecturer with the Department of Pacific Affairs at the Australian National University.