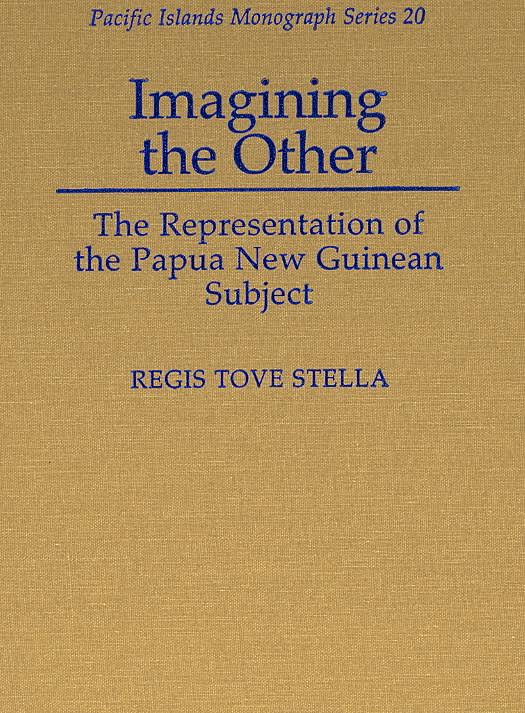 “…colonialist discourse had an extremely powerful, negative effect on the self-understanding of Papua New Guineans. The residue of this dis-empowerment has continued to haunt the national psyche long after political liberation and independence” (Stella, 2007: 208).

The late Regis Stella’s book Imagining the Other: Representations of the Papua New Guinean Subject will occupy a critical place in PNG literature for many years to come. It is an uncomfortable reminder of the legacy of Papua New Guinea’s (PNG) colonial past which continues to shape representations of PNG today. Stella argued that: “Because representation is never neutral and is always a site of (power) struggle, […] PNG subjectivity is always ambivalent, unstable, and contested by competing discourses” (Stella 2007: 10). Regis Stella, who passed away on 18 April 2012, was from Bougainville and attended the University of PNG (UPNG). In his postgraduate studies he specialised in Pacific literature, completing a Masters at the University of Wollongong and a doctorate at the University of New South Wales. This book is based on his doctoral thesis. He was undoubtedly one of PNG’s finest scholars, literary authors, and critical thinkers. Up until his death he was a faculty member of UPNG. That he was widely respected in PNG and abroad is evident in the obituaries at the time of his death, some of which can be found here, here, here, and here.

This reflective review comprises two posts. In this post I introduce the book to a non-specialist reader. In the next post I reflect on its contemporary relevance for anyone wishing to understand PNG, and I offer some tips for readers based on my reflections. In both posts, I argue that Imagining the Other should occupy a central place in the literature for anyone wishing to understand PNG. I also highlight my take-home gems in the book which, in my view, make it seminal.

What is the book about?

In this book, Stella interrogates literary fiction and colonial discourses from the first documented encounter with the outside world in 1526 to the period just after independence in 1975 to examine how Papua New Guineans have been represented, and how these representations work to reinforce colonial relationships of power and inequality. He also examines self-representations by Papua New Guinean writers as they contest and reinscribe indigenous self-representations within these colonial discourses. By examining texts he draws out the moral values and point of view of the writer.

In Chapter 2 he establishes indigenous Papua New Guinean self-representations within their oral traditions and shows how indigenous identities are rooted in and inalienable from land and place. This oral tradition makes indigenous identities and histories vulnerable to domination by outsiders whose written traditions are more likely to retain permanence. In Chapter 3, he explores the first encounters by white people and their assumptions that the land and space was a ‘tabula rasa’ – a blank sheet – without indigenous history (Stella 2007: 51). Naming places with Western names and raising flags were symbols of the suppression of indigenous history and identity, which also served to protect the interests of outsiders who viewed the land as alienable property. Early portrayals of PNG land and people reveal a paradox in the point of view of the outsider. On one hand, white outsiders feared the place and portrayed it as unfamiliar and inhospitable. On the other hand, they were attracted to it and portrayed it as an adventurous place to be explored and exploited.

This tension is reflected in formal colonial and legal frameworks, which are examined in Chapter 4. In the following three chapters he examines common tropes deployed to caricaturise and dominate Papua New Guineans. In Chapter 5, he argues that by referring to people as childlike, such as through the use of terms like ‘boys’ to describe adult men, colonial paternalistic attitudes were reinforced and justified. The trope of the PNG subject as the ‘savage’ is examined in Chapter 6. This trope reinforces forms of racial hierarchy in the Pacific in which Melanesians are degraded and need to be controlled. The relationship between sexes is explored under the trope of the ‘sexualised native body’ in Chapter 7. He builds his argument around the 1926 White Women’s Protection Ordinance which he argues originated from the view that ‘construed indigenous women as sexless and invisible but also constructed Papua New Guinean men as rapists or potential rapists with uncontrollable, animalistic, sexual lust for white women’ (Stella 2007: 140). This chapter ends with an exploration of interracial sexual relations during the colonial period as suggestive of a growing tolerance between the races.

The author then turns his attention to indigenous self-representations during the pre-independence period (Chapter 8) and the years immediately following independence in 1975 (Chapter 9). By the mid-1960s, under pressure from the United Nations, Australia embarked on decolonising the country, a process which included the establishment of national tertiary institutions. This set in motion the emergence of PNG’s first wave of indigenous writers with its origins at UPNG (Stella 2007: 167). Stella argues that this generation of indigenous writers drew on various strategies to resist and reassert forms of self-representation. These included compartmentalisation, which involves forms of resistance to outsiders’ representations; for example, withholding vital information about traditional and sacred identities were some ways indigenous people retained control over how they were represented. Appropriation involved the engagement with Western forms of knowledge such as writing, Western music forms, and incorporating indigenous concepts into Western architecture, to express indigenous points of view. Interpolation involves giving effect to this self-representation by immersing it into Western systems of knowledge creation, such as publishing. In Chapter 9, he shows how indigenous PNG writing in the years after independence in 1975 reveals a growing despondence among indigenous writers towards the emerging elite and PNG leaders who fail to meet the dual expectations placed on them by modern modes of governance their traditional leadership roles. This period results in some common ground between indigenous and foreign writers as they focus on critiquing the increasingly corrupt PNG state.

The book is framed around the historical racial binary between the indigenous–black and colonial–white relationship. It is a reminder of the ethical and moral obligation and the power we each have in shaping how PNG and PNG people are represented, and that we must also be brave enough to step back and allow self-representation to be an organic process — no matter how uncomfortable we might feel about this. It is also a reminder that our own works are and should be open to qualification and scrutiny by those who we regard as subjects.