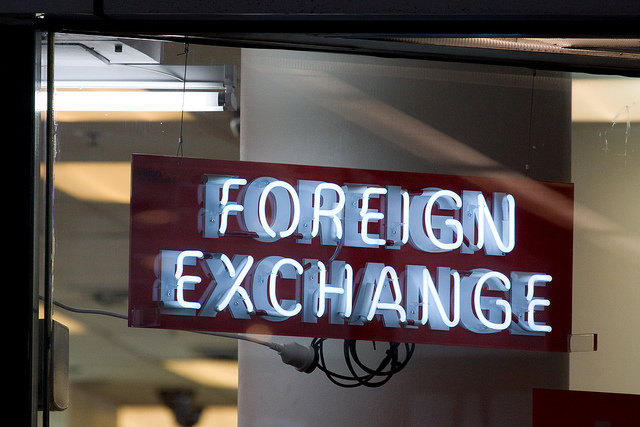 Last year, I made a comparison of the 15 countries with floating exchange rates that relied most on natural resource rents. It showed that while all the other currencies in the list had depreciated, the kina had actually appreciated against the US dollar. One year on, I have repeated the exercise, using the same countries.

As I did last year, I take June 1 2014 as the starting point for the comparison since this was the date on which the Bank of PNG introduced trading bands and so began its more active management of the exchange rate. 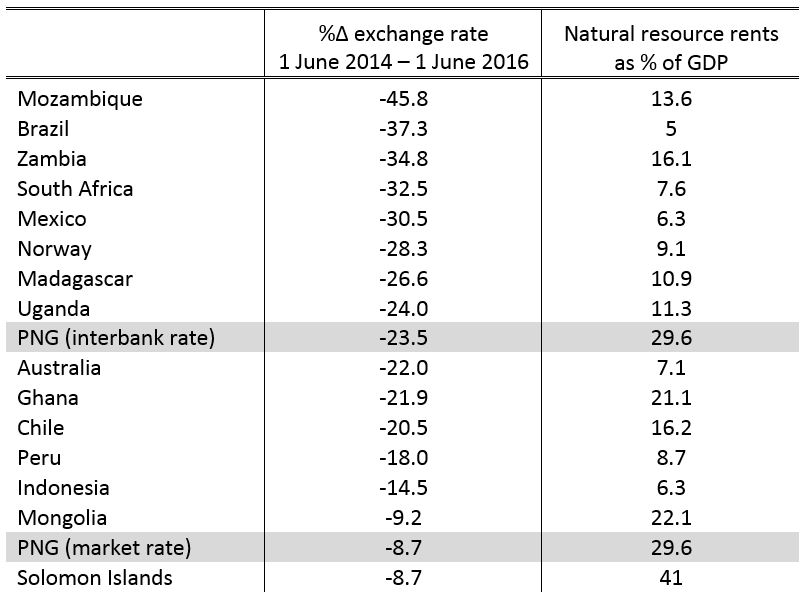 Sources and notes: Exchange rates from OANDA datasets using daily mid-market rates.Resource dependency is measured by the ratio of natural resource rents to GDP, as measured by the World Bank Databank.

Some may argue that the market rate, on June 1 2014, in fact undervalued the currency, perhaps due to collusive bank behaviour, or speculation. On the other hand, the consistent and increasing foreign exchange backlog that has persisted under the interbank led exchange rate (reportedly up to 3 billion kina) suggests that the interbank rate overvalues the currency and also suggests misalignment with current underlying fundamentals. The table shows a comparison using both rates.

The table shows that the kina now has fallen, though still relatively modestly in comparison to other resource exporting countries. On average, these countries average a 15.5% reliance on resource rents out of total GDP, and have averaged a 24% reduction in their exchange rate since 1 June 2014.

While resource rents contribute 29.6% to PNG’s GDP, the kina market rate has just depreciated 8.7% since 1 June 2014, and the inter-bank rate 23.5%. Given that PNG relies relatively more on natural resource rents than most of these countries, we would expect that its exchange rate to have fallen further than average. Without this fall, the PNG goods are less competitive internationally and overall, even without currency rationing, there is a negative impact on GDP.

Notably, the Solomon Islands is also an outlier in this table, but its main exports are timber and fish, which comprised 78.2% of total exports in 2014. These have not fallen in value as dramatically as oil/LNG, copper, nickel and coffee, which made up 53.5% of total exports of Papua New Guinea in 2014.

Other oil/LNG exporting nations have had to respond to lower oil prices by changing their exchange rate regimes. Kazakhstan, for whom oil rents represent 21% of their GDP in 2014, established a floating exchange regime in August 2015 due to oil price falls and falls in the currency of trading partners, in particular the Russian rouble. This has since resulted in a 45% drop in the value of the currency.

Azerbaijan, for whom oil rents represented 27% of their GDP in 2014, followed suit, also moving to a floating exchange regime in January 2016. This resulted in a 35% drop in the value of the exchange rate against the US dollar. This was not before the country’s central bank had spent more than half its foreign currency reserves to support the currency.

Argentina’s new government has also relaxed control over forex rates and abandoned its dual-exchange-rate system by bringing the peso down 35%. Colombia and Malaysia too have opted to show more tolerance toward drops in their currencies against the dollar and have minimized interference in the market.

Many of the Arabian Gulf states have not abandoned their fixed exchange regimes. However, this has put severe strain on their foreign exchange reserves. For example, economic officials in Saudi Arabia have spent US$100 billion of exchange reserves in 2015 to maintain their currency peg to the dollar.

Nigeria, whose oil rents contribute 10.8% of its GDP in 2014, has so far committed to a fixed exchange rate system, and like PNG has had severe problems in accessing foreign exchange. In Nigeria, however, there is a very active parallel exchange market.

The most confusing aspect of the Papua New Guinea situation is that oil prices dropped just as oil/LNG production and shipping began. This has made the impact of the drop in oil and other commodity prices difficult to disentangle. What we do know is that even though the kina has fallen, extensive forex rationing is still hurting PNG’s importers, and devaluations by competitor countries has hurt exporters and import-substituting businesses in PNG.

Since approximately September 2015, however, PNG has made up some lost ground. This can be shown in the following graphs that depict the competitiveness of the kina against PNG’s major trading partner currencies: the Australian dollar, Japanese yen, and Malaysian ringgit. The graphs show the exchange rate from the perspective of PNG’s major trading partners, and show that since late 2014 goods from PNG have been getting relatively more attractive. 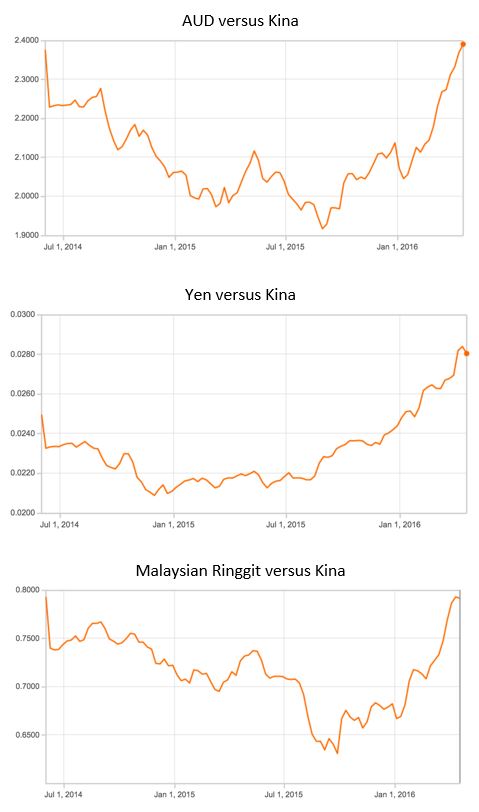 Depreciating the kina will have the effect of raising international competitiveness, which is good news for exporters, and it means that PNG becomes a more attractive place for tourist dollars. These circumstances present better opportunities for businesses to market PNG and PNG goods in exchange for foreign currency.

However, a falling kina also negatively affects importers, those with overseas loans to pay off, and consumers of imported goods. Thus the falling kina represents a risk to many consumers and debtors, of which the government is one.

As outlined in previous blog posts, the best way to trade off the costs of a high kina to some parts of the economy, and the costs of a low kina to other parts, is to move over time to a market rate.  A managed adjustment will allow businesses time to adjust to new conditions, but if the rate is misaligned rate for too long, the price in terms of economic growth will be too high.

Interestingly, the most recent data for the last month shows that the Central Bank has held the kina steady against the USD for the last month at 3.165 kina to the dollar (see, for example, here.) BSP’s CEO Robin Fleming has recently commented that banks can now meet the current demand for USD from importers. That is encouraging. But imports are greatly compressed, and there is still the massive backlog in foreign exchange orders to deal with. International experience suggests that the kina still has some way to fall.

Rohan Fox is the Partnership Coordinator for the Crawford ANU – SBPP UPNG partnership, which is funded by the Australian aid program under the Pacific Leadership and Governance Precinct. This post is the second in a two-part series on PNG’s evolving exchange rate regime; find the first post in the series here.