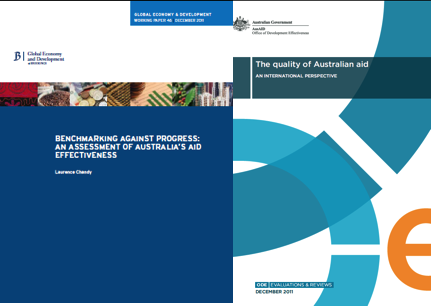 In a recent blog post, Stephen Howes found fault with my analysis of the Australian aid program. His criticism focused on my claim that among the 6 bilateral donors who devote at least half their aid to fragile states, Australia ranks 2nd based on the donor assessment tool, QuODA. Stephen shows that there is no relationship between donors’ QuODA rankings and their exposure to fragile states, which, he argues, means that the finding is unimportant.

Stephen’s point is well made and well taken. Since he has graciously invited me to respond, I will use this opportunity to explore why this relationship doesn’t exist and to question whether the conclusion he draws from it is justified.

It is well established that aid to fragile states tends to be less effective than aid to stable countries. Last year’s monitoring survey of the Paris Declaration found evidence of this across all five Paris principles, including a greater reluctance on the part of donors to put their money through recipients’ often corrupted procurement and public finance systems (alignment); and a greater tendency for donors to establish their own Project Implementation Units and to eschew programmatic approaches to aid management and delivery (harmonization). Looking beyond the Paris agenda, there is also evidence of aid to fragile states being more volatile, more fragmented, and corresponding less to areas of donor expertise than aid to stable countries.

These trends emerge not only in cross-donor analysis across the international aid system, but are borne out within most individual donor agencies in the way their approach to programming differs between fragile and stable partners. For instance, 75 percent of the Netherland’s aid to stable countries is channeled through country systems, but less than half this share (33 percent) is achieved among its fragile partners.

In light of these points, “the lack of a relationship between aid quality and exposure to fragile states is surprising” as Stephen himself admits. What explains this result? Stephen’s explanation is that QuODA primarily measures things which are independent of aid recipients. But this account seems unsatisfactory given that QuODA captures the very same aid quality characteristics that are described above.

A better explanation is that while donors tend to differentiate their approach to aid giving in stable and fragile countries, there are also important differences between donors: how they work in stable countries, how they work in fragile states, and the degree to which they distinguish between the two environments. These differences between donors dominate the QuODA results, not least because QuODA arranges aid quality characteristics into donor—as opposed to recipient—scores.

Given the lack of a relationship, should the 2nd of 6 result be disregarded? In my view, this conclusion would be justified if any of three conditions held: if the comparator group were irrelevant to Australia; if the result let Australia off the hook for its aid quality; or if the result made Australia look better than it really is. But none of them do.

Australia considers its focus on fragile states as one of the defining features of its aid program. This is evidenced by its active membership of the International Dialogue on Peacebuilding and Statebuilding and its recent commitment to pilot a new approach to aid delivery in fragile states agreed at the High Level Forum in Busan. This is justification alone for Australia wanting to compare itself with other donors focused on fragile states and treating them as its peers.

Some commentators have argued that the operating environment in fragile states is too constrained for donors to deliver aid in the manner advocated by the Paris Declaration, implying that donors who focus on fragile states should not be held to the same standard. My report argues otherwise. Rather than lowering the bar for donors like Australia, I repeatedly contend that while delivering aid effectively is harder in fragile states, it is nevertheless feasible and there is growing understanding as to how this can be done. (I have made this same point in other publications here, here and here.) This is why Australia’s improved performance between the first and second iteration of QuODA should be applauded, and why Ireland provides a good example to Australia for how it could do better still.

Finally, while the 2nd of 6 result may be a “fluke” as Stephen maintains, it is hardly misleading. If you multiply these numbers by 4, you end up with 8th of 24. This looks a lot like the 8th of 23 ranking Australia records against all bilateral donors in QuODA.