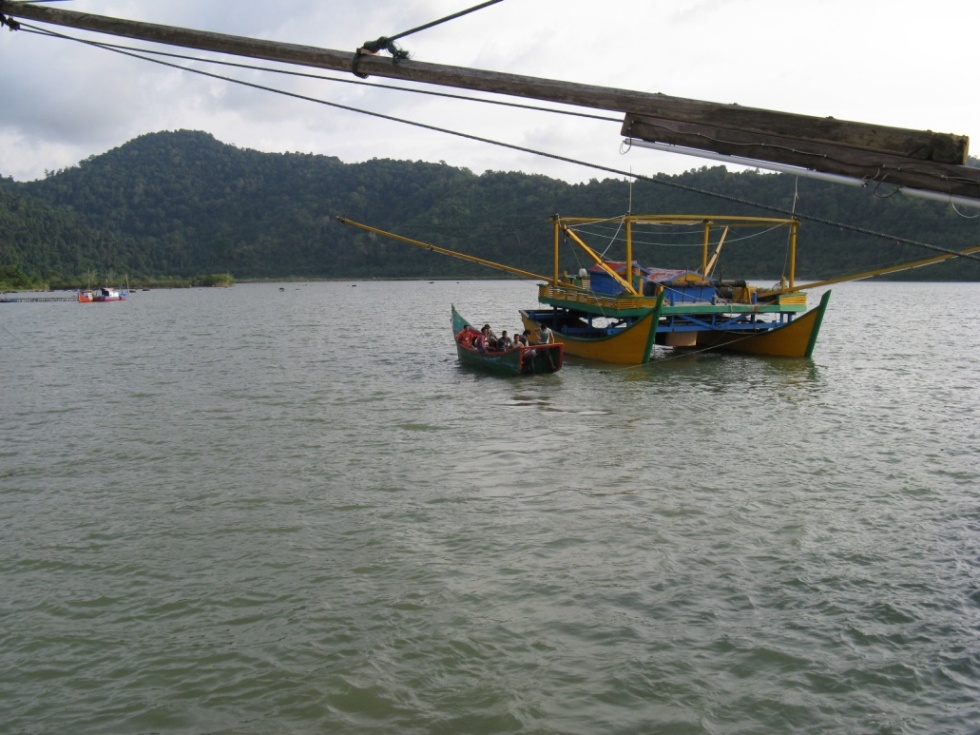 For generations Aceh’s fisherman worked from palung, fishing platforms anchored several kilometres off the coast. After a night spent using lamps to attract the fish, the fishermen returned each morning during the eastern monsoon to sell their catch. When the 2004 tsunami crashed into the west coast of Sumatra in 2004, it destroyed the palung.

A palung costs up to Rp140 million ($A 12,000) to build. The prohibitive cost meant that fishers could not rebuild them. So several donors stepped in, funding the construction of 12 new palung. But now, almost ten years after the tsunami, only four of these still operate. A village leader I spoke to estimated that only 136 of the 250 fishermen in his village now worked on the palung. The others remained ‘without a future’. Some took to the sea on rubber tyres in an attempt to catch at least some fish. Given the funds allocated for fisheries reconstruction after the tsunami, this poverty is a sad outcome. While 60 palung used to sit off this stretch of Aceh’s coastline, now fewer than 20 remain.

The tsunami that struck Aceh remains the world’s largest natural disaster in 40 years. It devastated the west coast, with 130,000 confirmed dead and an additional 500,000 people displaced. Afterwards more than 463 NGOs and donor agencies spent $7.5 billion on reconstruction. Aceh became one of the largest aid efforts ever seen in the developing world.

A decade on and the gaze of the aid industry has shifted elsewhere. But what is the legacy of all these projects? After the aid ended, do poverty and food security persist? These questions are important.

Policy, projects and research focus on the problems creating vulnerability. In particular, flood, drought and other natural disasters — now made worse by climate change and conflict — can transform marginal forms of poverty into chronic vulnerability or food insecurity. When catastrophes occur, donors make large investments in humanitarian responses. So what are the best ways of intervening?

In 2012 I led a team that undertook food security surveys in sample villages. We found that, despite so much funding, up to 50 per cent of villagers faced various forms of food insecurity. Like other reconstruction efforts, the foreign aid had rebuilt infrastructure. But livelihoods remain well below the pre-disaster level of well-being. Indeed, we found that landless rice farmers, share croppers and those whose livelihoods were largely left aside by the post-tsunami aid projects remain particularly vulnerable.

Yet eight years ago donor’s and NGO’s ‘participatory’ livelihood programs inundated this area. As our survey found, each village hosted between seven and ten livelihood projects. On returning to these villages we searched for projects that were still providing livelihood outcomes eight years later. We came across only four in more than 40 villages.

For donors the reasons for successful projects appear to have been difficult to anticipate. In many cases a dynamic and capable leader had taken charge, a person who could galvanize the villagers and maintain a sense of legitimacy and fairness. This occurred when the NGO left space for self-organization, and where projects fitted well with local realities. This tended to occur in projects over longer time periods, where donors allowed time for learning and offered longer term support. Here group processes mapped onto Acehnese ways of controlling things.

Clearly, rural development is difficult, and even more so in a crisis situation. Along the tsunami coast projects expected community participation, and many required villagers to form cooperatives. Villagers described how the NGO would take a commemorative group photo when the project ended. People then went back to their family and neighbourhood, and in so many cases the livelihood project was simply abandoned.

There were many reasons for poor outcomes. Donors had incentives to spend quickly. They had tight timelines to meet. Coordination remained difficult and agencies competed for the attention of villagers. NGOs were new to the area and often had a poor understanding of the local situation. They applied stereotyped approaches that did not fit the context well. In many cases there were no sanctions for poor projects and little accountability for how the money was spent.

The tsunami had taken the lives of up to 60 per cent in some villages. The Acehnese described how they were afflicted by severe depression in the immediate aftermath of the disaster. They initially took little interest in rebuilding their lives. This would happen much later, after the donors had gone. In the meantime many developed a dependence on aid handouts. During this time they simply followed directions regarding how they should ‘participate’. Within the villages the networks of charismatic and vocal leaders dominated. Those who were not close to these people felt left out and refused to join village meetings.

In the future donors and NGOs need to do better. They can scale down their ambitions. Rather than trying to ‘build back better’, they might just aim to help return people to adequate livelihoods. Timelines need to be more realistic. NGOs might consider long-term partnerships, holding off assistance until later, when villagers are less traumatized and ready to think about their livelihoods. Most of all, donors need to understand the long-term drivers of vulnerability. These are quite different from the immediate needs of an emergency. Addressing the processes that produce vulnerability entails focusing more on agriculture rather than infrastructure. In rural Aceh access to arable land, water, fertilizer, seed and financial services are still required. Projects need to increase production and village incomes.

Rather than coming in with buckets of money that people become dependent on in the short-term, aid requires patience, strategic thinking about the causes of poverty and engaging over the longer term.

A working paper based on this research can be found here.

John F. McCarthy lectures in the Australian National University’s Crawford School of Public Policy. He carries out research into issues of agrarian change, land tenure, environmental governance and natural resource policy. He is the author of The Fourth Circle: A Political Ecology of Sumatra’s Rainforest Frontier (Stanford University Press, 2006).