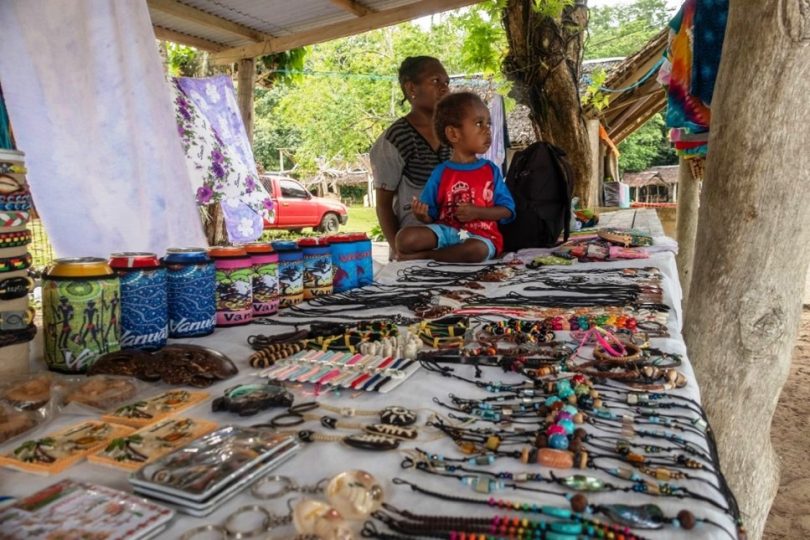 A woman from Hog Harbour, Vanuatu, selling handicrafts to tourists prior to COVID (Dirk Steenbergen)

The impacts of COVID-19 have added a new layer to the region’s development challenges. The economic costs of the pandemic, and the collapse of international travel, have strained countries’ support systems. For countries like Fiji and Vanuatu, it has inflicted deep economic hardship on a wide range of sectors, but in particular the tourism sector, where many have been left struggling in the aftermath of livelihood losses.

Among the many distressing accounts, there are also positive reports though. Drawing on recent economic data from Vanuatu, Howes and Surandiran outline how Vanuatu’s economy has performed better than expected through the COVID-19 crisis, despite “real economic pain”. They convey constructive, yet cautious, optimism that there are mechanisms and developments that can provide avenues for Pacific Island economies. We seek to complement their economic focus, with additional perspectives from rural settings in Vanuatu and Fiji that highlight social dimensions of rural island life as assets with which Pacific Islanders can live through COVID-19.

The diverse cultures in the Pacific are rooted in traditions, and inter-generational understanding of environment, that connect peoples’ identity to land and sea. Historically, Pacific Islanders have had to withstand many environmental shocks, from extreme weather events to earthquakes. Illustrative of this, seasonal events like cyclones have been shown to be integral to a cyclic pattern of life in the region.

Over generations, strategies to cope with change have become integrated into the way people go about their daily lives. Following the devastating impacts of tropical cyclones Pam (2015) and Harold (2020) in Vanuatu, for example, villagers looked inwards, relying on traditional knowledge in crop cultivation, food preservation, and architecture to recover.

Traditional systems have, however, been disrupted by prolonged periods of systematic change, most often imposed from outside. Colonial hangovers have, in some places, manifested themselves in entrenched societal inequalities created by imposed governing systems. Such disparities have further led to political instabilities, such as civil unrest and coups. This has seen people’s social and economic security affected, forcing them to pivot and adapt.

Pacific Island cultures have been shaped by the necessity to continually adapt – a trait too often overlooked in neoliberal development narratives that seek to build new capacity, introduce new technology and/or integrate new ‘best practices’. Such perspectives are rooted in notions of vulnerability that frame Pacific people as helpless – often simplistically portraying a dependence on international aid. While foreign aid is undoubtedly vital – and arguably a responsibility on the part of larger economies – it should not overshadow the agency of local people.

In Fiji, in response to the pandemic, former hotel workers have returned to their rural roots with their families, farms and traditional skills to sustain themselves. As one woman, who previously managed a tourism enterprise, explained, adopting traditional livelihood practices has saved her family a lot of money: “We eat mainly from our plantations, catch our own fish, crab, clams, seaweed and all that’s out there that doesn’t need cash.”

Along the usually bustling tourism hub of Fiji’s Coral Coast, age-old practices of solesolevaki have been revived – practices of communal solidarity involving, for example, collective work for the good of a village or clan with no expectation of individual return. This is strengthening kinship ties, which for some former hotel workers is improving aspects of their wellbeing, despite financial hardships. A female former hotel worker said:

“At the moment, in our village, each Tokatoka [extended family group] does their own rotational visitations to a household each week, mainly on Wednesdays during evening devotion. This helps the villagers a lot with our social, health and cultural wellbeing. We have devotions together, catch up over tea or kava afterwards and just socialise and de-stress.”

Others have taken to Facebook, Twitter, and other virtual spaces to raise funds from within their countries as well as their international diaspora, or to sell wares from their newly developed businesses – Ben’s Kitchen, for example, was started by a former hospitality worker in Fiji.

In Vanuatu, public advice from the National Council of Chiefs at one point urged people to return to home villages and revive bartering practices to weather the economic downturn following COVID-19 (with similar experiences in Fiji). Like in Fiji, people are adapting without tourism income in Vanuatu’s rural settings. In Hog Harbour, on the island of Santo, many women lost jobs when cruiseship tourism stopped. Women’s groups have since become more active in fundraising through food and bake sales. The proceeds of these have not only enabled the women to cover costs like school fees, but also provided capital for new household enterprises, such as laundry services, home bakeries, and baby-sitting services.

Kastom practices and norms have resurged in Hog Harbour, providing safety nets. Drawing from the memory of past practices, and the indigenous knowledge of elders, many people turned back to gardening aelan kakai (‘island food’ involving staple root crops), since over-the-counter, processed food was too expensive or unavailable. Customary leaders enacted their traditional responsibility to support landless households by providing access to land for cultivation under local user agreements. A male community elder and leader said:

“Most of us returned to the land and sea to make sure we had enough food and could still have an income… traditional responsibilities of our elders meant landless people and extended families could do their own gardening and fishing; this all helped us as a community to survive without much help from outside.”

The changes that came with the COVID-19 pandemic have spurred new patterns of adaptive behaviour across the Pacific wherever people have access to customary land, showing how local agency can not only mitigate setbacks, but also improve aspects of daily life, like food security. Adaptation in the face of tourism collapse is highlighting the value of traditional institutions and social relations. We see this materialise through, for example, young people being taught about customary methods of fishing, or the merging of kastom with technology via virtual means of fundraising.

The COVID-19 era, while disruptive and isolating for many Pacific rural communities, is showing how rural development assistance stands to provide more meaningful impact by building upon the strengths in communities. Through integration of traditional knowledge and local production capabilities into adaptive capacity building, development efforts can better sustain long-term economic resilience and strengthen people’s safety nets.

This research was undertaken with support from the Australian Centre for International Agricultural Research (project FIS-2016-300), Massey University, and the Royal Society Te Apārangi. The views are those of the authors only.

Apisalome Movono is a Senior Lecturer at Massey University, and seeks to broaden understanding about solutions and strategies for the many challenges Pacific Islanders face.

Pita Neihapi is a Fisheries Officer and the community-based fisheries management team leader at the Vanuatu Fisheries Department.

Regina Scheyvens is Professor of Development Studies at Massey University, where she combines a passion for teaching with research on tourism and sustainable development.

Dr Dirk Steenbergen is a Senior Research Fellow at the Australian National Centre for Ocean Resource and Security at the University of Wollongong.