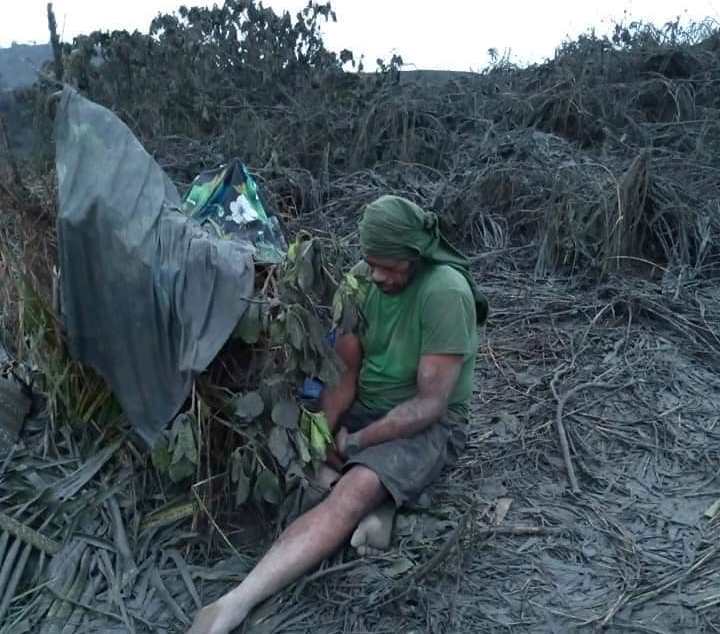 The aftermath: Timote Ake, who lost his house and all his belongings, on Mango Island, Ha'apai (Piokalafi Fakaosi)

At the time of Tonga’s volcanic eruption and tsunami which began on 14 January 2022, there were an estimated 150,000 Tongans living overseas. Of these, close to 5,000 Tongan workers were employed across Australia and New Zealand under their respective Pacific temporary labour schemes. For Tongans offshore, as well as at home, the volcanic eruption and tsunami have been devastating and heartbreaking.

The breakdown of communications early in the aftermath meant many seasonal workers were left in the dark, not knowing whether their families were safe or not. After several days, Digicel was successful in reconnecting international phone coverage and 2G connectivity, and Tonga Communications Corporation restored wi-fi connectivity.

But as communication lines have slowly resumed, not all seasonal workers have had the same opportunities to connect with their families. Some still struggling include those with family members who do not have a mobile phone, or whose phones have been lost or damaged in the disaster.

Many Tongan seasonal workers have been absent from home for much longer than usual due to COVID-related travel restrictions, with some now in New Zealand and Australia for more than two years. Absence from home for prolonged periods of time, and when a disaster unfolds, can have negative impacts on the mental health of seasonal workers.

Not being able to provide direct physical and emotional support to their families, and fulfil social obligations, can be particularly challenging for seasonal workers, and may lead to feelings of helplessness, loneliness, depression and isolation, as well as problems such as not sleeping well, increased fatigue and increased alcohol use. The limited communications with loved ones may lead to further stress and anxiety. Appropriate mechanisms to support Tongan seasonal workers – such as counselling services, and access to medical and social support structures, such as churches – are needed now more than ever.

In 1839, King George Tupou I committed his country, his people, and future generations to God’s protection, when he proclaimed “God and Tonga are my inheritance”. The central role of the Christian faith in Tonga is articulated in this motto, which is also stated on the Tongan coat of arms. The communities of the Tongan diaspora, including seasonal workers, continue to pray for the safety of their families.

The solidarity of the global Tongan diaspora is visible via Tongan social media, TV and radio station platforms, that mobilise the community in prayer, offering words of encouragement and playing uplifting songs of worship, and providing solace to the Tongan diaspora. The spiritual health and wellbeing of seasonal workers is helping their resilience during these treacherous times.

Many seasonal workers who remain in New Zealand or Australia in full-time work are in a strong position to financially support their families in Tonga. Financial and material remittances from seasonal workers and other members of the diaspora can assist with disaster relief and resources to rebuild.

There are benefits and challenges around sending remittances during and after natural disasters. Remittances can provide immediate financial relief, and contribute to both medium- and long-term recovery. But there is the question of whether systems are functioning sufficiently to process thousands of remittance requests. In addition, the hidden costs associated with exchange rates and transfer fees vary between different money transfer systems; it pays to ‘shop around’ for the most value-for-money transfers.

For families who have lost their identification documents in the disaster, receiving remittances will be difficult. However, Western Union’s online money transfer system, KlickEx Pacific, and remittance transfers to Tonga via banks, are once again operational.

Some seasonal workers in New Zealand are buying supplies to be shipped from Auckland to Tonga; while some workers in Australia are sending money to relatives in New Zealand to do the same. Churches in New Zealand, such as the Mormon Church, have also been actively fundraising and organising containers of food and emergency supplies to be shipped to Tonga. But with New Zealand moving to the red traffic light setting on Sunday 23 January, there may be some delays with shipments. There are also anticipated delays with delivery of supplies into Nuku‘alofa, due to significant damage from the tsunami to the country’s main wharf.

Due to the damaged infrastructure across the nation, returning to Tonga is not currently an option. In New Zealand, Tongan RSE (Recognised Seasonal Employer scheme) workers have been encouraged to remain in the country and keep working. Australia will probably encourage its seasonal workers to do the same. How this will affect seasonal workers who were due to depart remains unknown.

Concerns have been raised that mass repatriation of workers to Tonga would place an additional burden on limited resources, such as safe drinking water, food supplies and medication. In addition, resuming quarantine processes will be challenging, due to damage to quarantine facilities, and the need to prioritise efforts for disaster relief and recovery. Mobilising diaspora resources and aid is a better way of supporting families back home.

This blog was corrected on 1 February 2022 to clarify that 14 January was the day the eruption began.

Rochelle Bailey’s, Gemma Malungahu’s and Charlotte Bedford’s research for this blog was undertaken with support from the Pacific Research Program, funded by the Department of Foreign Affairs and Trade. Telusa Tu’i’onetoa is an Australian Awards scholarship recipient. The views are those of the authors only.

Telusa Tu'i'onetoa is a PhD candidate at the Department of Pacific Affairs, ANU. She has worked for the Australian aid program in Tonga for 16 years.

Gemma Malungahu is a Research Fellow at the Department of Pacific Affairs, ANU.