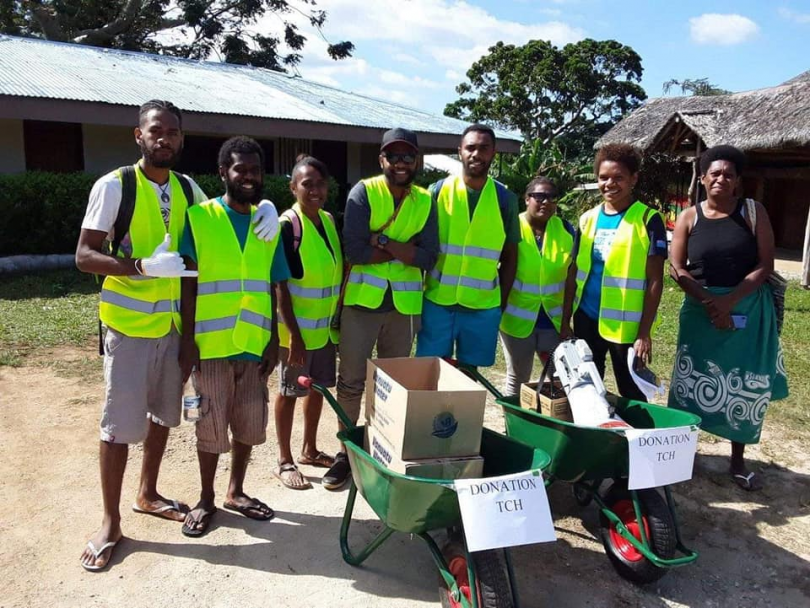 Touted as a solution to ineffective humanitarian aid, the localisation agenda has gained momentum since it was coined in 2016 with the expression “as local as possible, and international when necessary”.

The importance of local actors in development is not a new idea, but localisation destabilises international NGOs’ (INGOs) modus operandi by requiring they assume a backstage role in emergency response. Leadership is transferred to local responders who, it is argued, are best suited for that role.

Enthusiasm surrounding the localisation agenda and its roadmap, the Grand Bargain, is wavering as critiques emerge from the field and academia alike. The international community has failed to meet some fundamental localisation targets, notably the ratio of direct funding, but also the transference of leadership to local actors. Our research asks why.

We analyse Vanuatu’s response to tropical cyclone Harold, which struck at a time when several factors were united to support localisation, and identify elements that hindered the effectiveness of the local response. Our findings are based on semi-structured interviews with emergency responders in Vanuatu – state agencies, local and international NGOs, the Red Cross, donors, and the private sector – and documentation review. As the international community embarks on the design of version 2.0 of the Grand Bargain, our research aims to inform new iterations of the localisation agenda by highlighting its shortcomings and successes.

While the COVID-19 pandemic has undeniably affected humanitarian needs and access to funding, our interviews reveal that it also served as a catalyst to localisation in Vanuatu. When Harold descended upon Santo and Pentecost islands in early April 2020, a mere ten days after the country had closed its borders, most INGOs operating in Vanuatu had already repatriated their foreign nationals. No international responders were granted access in the aftermath of the cyclone. Help was thus provided by local actors (i.e., “localised”), but this doesn’t reflect a choice by international responders. The local response was a last resort resulting from domestic and international risk aversion in the pandemic.

As part of the post-Harold response strategy, respondents highlighted that the government activated the “cluster system”. Clusters are a response mechanism developed by the United Nations Inter-Agency Standing Committee to ensure greater coordination among humanitarian actors across different thematic areas such as health, food security, and shelter.

For the first time, Vanuatu cluster meetings were held in Bislama rather than English, and led by local organisations rather than foreign actors. In the absence of INGOs, needs assessments were conducted by the state. The private sector mobilised resources to provide assistance. Residents from the remote Banks Islands donated surplus harvests, while churches, women’s associations, and youth groups gathered clothing and kitchen wares for affected families on Santo and Pentecost. International funding was channelled through the Department of Strategic Policy, Planning and Aid Coordination (DSPPAC), considered a “local” actor as per the localisation agenda’s direct funding objective. The National Disaster Management Office (NDMO) took on the combined management of the pandemic and cyclone.

While these are favourable elements, our respondents also expressed frustration about lengthy response delays, a lack of funding and human resource capacity, and the state’s opacity in distributing funds, which impacted local organisations’ capacity for action. Despite being “localised”, the response had a number of important shortfalls.

Localisation in Vanuatu shouldn’t solely be attributed to international donors’ and INGOs’ commitment to impart greater autonomy to local responders. National capacity and an empowered civil society sector are other key determinants of successful localisation.

Building on key lessons from cyclone Pam in 2015 and a “never again” approach, Vanuatu invests 15% of its national budget in disaster risk reduction and climate change adaptation. According to Ralph Regenvanu, Member of Parliament and Chief of Opposition, disaster mitigation strategies include investing in local food production. When crops are destroyed in one part of the archipelago following a cyclone, other unaffected islands can supply food. Following Harold for example, the Banks Islands sent their surplus harvests to Pentecost and Santo. Investing in local food production is important, not just to save lives during emergencies, but to safeguard the country’s economy and reduce dependency on imported produce.

A hindrance to localisation is donors’ and INGOs’ lack of consideration of the strategies already underway in the country prior to the emergency, and of the actors already engaged. Emergency responses could instead build on the significant headway already achieved or underway in Vanuatu, carried out by a network of state actors such as the NDMO, the national chapter of the Red Cross, local NGOs, informal organisations and communities. Otherwise, localisation is at risk of remaining a Western-led agenda which perpetuates a foreign understanding of what constitutes a “local” response.

Meanwhile, despite the Vanuatu government’s increased leadership and role in the implementation of the post-Harold response, respondents highlighted the complex and sometimes antagonistic dynamics which shape interactions with the state.

By positioning itself as a “local” responder in the localisation effort, the state secured the bulk of foreign emergency response funding, as did national chapters of INGOs. However, for the local NGOs we interviewed, localisation requires a redistribution of power between the state, INGOs and small, local actors.

DSPPAC’s increased control of foreign aid and its opacity in terms of redistribution to local actors therefore runs contrary to the empowerment of civil society, and to the Grand Bargain commitment to “more support and funding tools for local and national responders”. It weakens local organisations’ capacity for action while simultaneously enhancing that of the state.

When confronted with the limits of its financial, technical and human resource capacities, the state’s lack of support to local actors resulted in decreased efficiency (the most optimal use of human, financial and material resources to achieve a desired outcome in the timeliest manner). For example, respondents from non-state organisations remarked that being stationed in remote locations granted them almost immediate access to the most affected communities to perform needs assessments and provide aid. Without funding, however, they had no capacity for action. This resulted in delayed assistance.

Overall, our research reveals that the success of the localisation agenda in Vanuatu is contingent not only on the state’s capacity and the extent of its resources, but also – and critically – on the quality of its relationships with local actors. A thriving civil society sector is complementary to state action, and can respond to residual needs. Successful localisation also rests on greater inclusivity of hybrid or atypical local responders, such as businesses and informal organisations, and on the recognition by foreign actors of the actions already underway in the country.

Anticipating the next crisis, international, national and local responders, including the private sector, can proactively engage in discussions leading to pre-assigned roles, responsibilities and resources. This will contribute to a mutually enhancing balance of state and non-state capacity upon which a successful localised response is based.

Morgane Rosier is a PhD candidate at the School of International Development and Global Studies, University of Ottawa.

Marie-Claude Savard is a PhD candidate and lecturer in the School of Management Sciences at the University of Québec at Montreal, and associate director of the Canadian Research Institute on Humanitarian Crises and Aid.