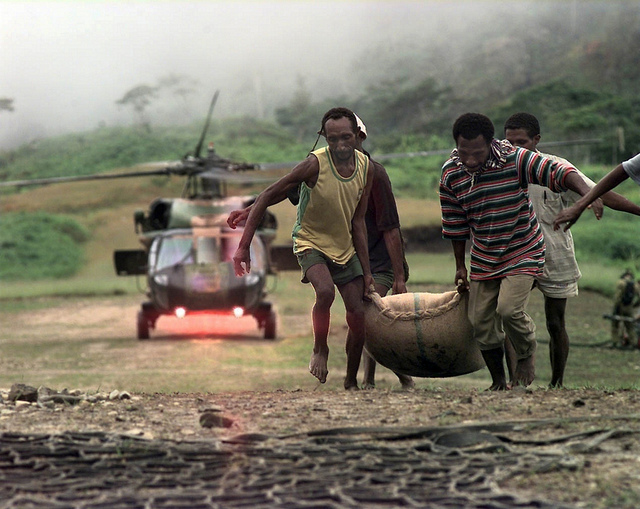 Allen and Bourke provide a detailed analysis [pdf] of the government of Papua New Guinea’s response to the El Niño events of 1972 and 1997, concluding that it was unfair to expect the PNG government to act in the same manner that a more developed western nation would. Rather, Australia and Papua New Guinea should make policy together, drawing on their own strengths and weaknesses.

Allen and Bourke note that during the 1997 event the following factors militated against a successful disaster response:

Without doubt the current El Niño event of 2015–2016 has brought a great deal of suffering to many of the most vulnerable people, in some of the most remote parts of Papua New Guinea. However, when you look closely at the Government of Papua New Guinea’s response in relation to the factors highlighted by Allen and Bourke, one can see that significant strides have been made.

Not unlike all other countries that are heavily dependent on the resource sector, Papua New Guinea is facing tough economic times. The arrival of El Niño placed more strain on a budget that was already under pressure. Despite this, in late 2015 the NEC allocated K25 million to disaster relief. By November 2015, half of that had been spent. Unlike in 1997, the government responded relatively quickly.

Given the budget constraints, the other source of potential funding was the District Services Improvement Program (DSIP). In late 2015, the Minister of Finance authorised the expenditure of K2 million from the DSIP to fund disaster relief. Whilst this brings with it its own problems (see this blog post from Wiltshire and Oppermann for more details), it was arguably a way to quickly deliver money directly to districts in the current economic climate.

Open members will be held accountable for the decisions that the local District Development Authority makes at the next general election. Although imperfect, this is the ultimate form of accountability in a modern democracy.

It is also interesting to note that the National Agriculture Research Institute (NARI) had been raising the alarm for some time. NARI had been warning government of the possibility of another El Niño event. However, faced with other strong competing priorities (such as fee free education and large infrastructure projects), it was always going to be difficult for NARI to secure more funding to develop drought or frost resistant crops and undertake more farmer education. It is only now that NARI’s voice is being heard.

This is not to say that it has all been smooth sailing. As pointed out by Trevor Meauri, the Deputy Secretary for the Department of Prime Minister and NEC, the delivery of relief supplies is difficult. Some of the hardest hit villages are accessible only by air and can only be serviced by small aircraft. Often the cost of transportation far outweighs the cost of the food itself.

However, a lot has been learnt and clearly the management of the current El Niño event has not been all bad news.

Felicity Herbert is a policy and legal advisor in the Governance Program and is working with the Department of Prime Minister and National Executive Council in Papua New Guinea. The views expressed in this article are the author’s alone and do not represent the views of the Australian Government or Coffey International Development.

Felicity Herbert is a policy and legal advisor in the Governance Program and is working with the Department of Prime Minister and National Executive Council in Papua New Guinea.