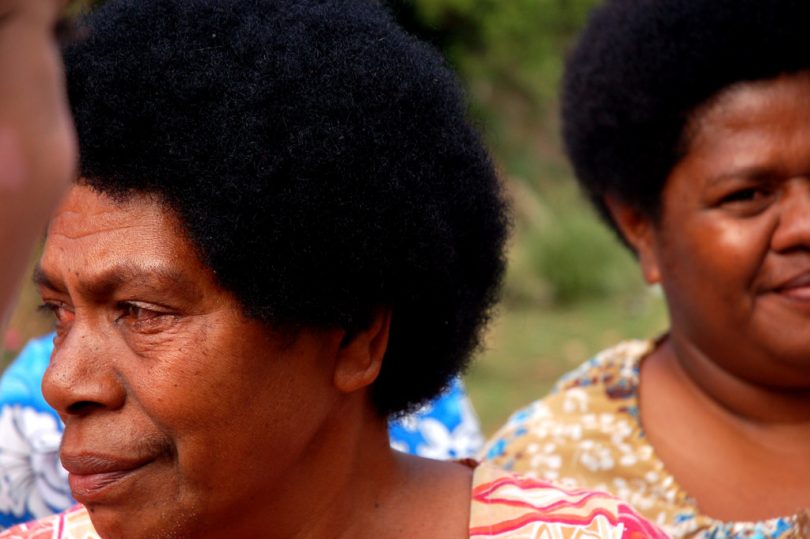 Have efforts to improve the policing of violence against women, in Pacific Island societies, increased women’s safety? Between 2015 and 2016 I conducted field research on precisely this question, in Fiji, Bougainville and New Caledonia.

At the conclusion of one meeting with a group of women in Fiji I was confronted with a striking observation. One of the participants interrupted the friendly banter as we sat drinking tea with a request that the meeting be reconvened, with men invited to attend. “Our men have no idea what we go through,” she explained, “our stories are just our own”.

This request reflected the difficulties women in Pacific Island countries have generally faced in getting their leaders to recognise and address the issue of violence against women. But it was also spoken in the context of a Fiji-wide government-led, “zero tolerance” for violence against women program. Launched in 2009, this ongoing initiative involves state legal authorities and is also a central part of new community policing programmes involving the “mana” of cultural and religious leaders for enforcement.

These programmes were launched with much fanfare and have enjoyed positive media coverage inside the country. But the fact that the women participating in my research continued to feel that their stories of violence remained “just their own” suggested a significant gap between the rhetoric and reality of reform.

Across the Pacific Islands reforms designed to improve state responses to gender violence have been introduced in recent years, often following crucial awareness-raising work by women’s advocacy organisations like the Fiji Women’s Crisis Centre, the Vanuatu Women’s Centre and the Union des Femmes Francophone (working in the French Pacific territories of New Caledonia, Wallis and Futuna and French Polynesia).

These state programs promise better protections for women who are subjected to violence in familial and conjugal settings, for instance, along with harsher penalties for perpetrators of such abuse.

However, despite such initiatives, available estimates continue to suggest that as many as two in three women in some Pacific countries are exposed to violence from family members or intimate partners at some point in their lives.

The failures of “protect and punish”

These challenges are not unique to Pacific Island countries, of course. In recent decades, governments around the globe have worked to improve their policing responses to violence against women. And from these experiences we are now learning more about the shortcomings of their efforts.

In particular, “punish and protect” models of state intervention that address gender violence as if it were a violent crime like any other often have contradictory impacts. These models treat such violence as “incident specific crime” – an approach which has trouble recognising, and ultimately does little to alleviate, the ways in which violence is experienced by women as a continuum of coercive and controlling behaviour.

Efforts to address gender violence must instead recognise how violence is used in all societies to control women’s lives both within and outside the familial and conjugal realm. This violence can be used as a form of discipline to uphold norms of gendered behaviour, for instance, and to punish women individually when they overstep the boundaries of what is considered appropriate.

Violent abuse can also function as part of broader behavioural patterns which entrap women in dependent relationships. Ironically, women who live with violence may fear what will befall them if the “protection” offered by males partners or family members, who are simultaneously also their “aggressors”, is removed by interventions to halt violence.

Fears of violence can further reinforce the discriminatory gendered political and economic ordering of society in broader ways. Controlling and dependent relationships with men can prevent women from joining with others in collective activity which might build social solidarity or provide them with resources to improve their economic or political standing.

One woman I interviewed in Bougainville, for instance, described her male partner’s anger when she returned home late from women’s church meetings and her strategy of often taking refuge at her sister’s house to escape violence.

When violence is used as form of gendered control in this way, it has an immediate physical impact, but it also reduces women’s capacity to achieve social, political, and economic autonomy – and as a result, women’s access to the resources or opportunities that enable resistance to abuse.

Today, more women across the Pacific region are raising their voices and protesting about their experiences of violence before the police and the judiciary. But here too, existing gender discriminatory norms remain “sticky” even in the wake of legal and policing reforms.

In too many cases, women in Pacific Island jurisdictions report that they are turned away from police stations by officers who trivialise their complaints, encourage them to reflect on their own ‘culpability’ in violence (a view also promoted by some of the region’s political leaders), or take on a counselling role and encourage them to return to home and reconcile with their husbands.

My recent research in Fiji has shown that where community leaders are involved in responding to this violence, women may face similar pressure to withdraw their complaints so that the integrity of their marriage or their family is maintained.

They may face additional pressures to reconcile with aggressors so that their village does not suffer the “intrusion” of police authorities who are feared as corrupt, as possible perpetrators of indiscriminate violence themselves, or more generally resented because they represent a system of state authority that is more resisted in Pacific Islands communities than commonly understood.

In such contexts, women’s efforts to seek justice may be seen as a matter that is handled more appropriately by village or customary authorities. These actors are often recognised by local communities and by state judiciaries as playing an important mediation role in some disputes (often those occurring between clan or family members).

It is sometimes argued that where these pluralised networks of state and non-state authority overlap, individuals feel a greater sense of protection. But with complaints of violence against women, my recently-published research with Melissa Bull and Jodie Curth-Bibb shows that there can also be a tendency for mutual abrogation of authority or buck-passing.

Testimonies I gathered from Kanak women in New Caledonia, for instance, show that women’s appeals for help in managing violence in their communities were frequently refused by both customary leaders and the gendarmerie national police. Each group said the other was the more appropriate source of support and protection.

“Tinkering at the edges”

Little wonder, then, that many of the women I’ve interviewed talked not about their right to live free of violence but rather that violence is to be expected if women engaged in activity that is “not right.”

Many said security was not something they expected to be provided by authorities outside the home. Rather, they emphasised their own capacity to self-police their behaviour and adhere to expectations.

These testimonies offer unsettling insights into the ways that women’s experiences of violence are managed. Authorities’ initiatives have suffered under weak implementation. Reforms have adhered to a “punish and protect” model that does not address, and indeed utterly fails to recognise, the controlling and coercive effect of such violence.

Violence against women in Pacific Island societies – as well as elsewhere – cannot be fully addressed without also confronting broader gendered discriminations that make this violence possible and that limit women’s capacities to resist it.

Improving law and order responses is an important step. But this must be accompanied by broader programs that challenge the legitimacy of gender discrimination itself. To do otherwise is to but tinker at the edges of a deeply-entrenched social phenomenon.

Nicole George is researcher and senior lecturer at the School of Political Science and International Studies, University of Queensland, working on gender and security in the Pacific Islands region.

This post is republished with permission from 50.50 Inclusive Democracy.

Nicole George is a Senior Lecturer in the School of Political Science and International Studies at the University of Queensland. Nicole’s research focuses on the gendered politics of conflict and peacebuilding, violence, security and participation, broadly conceived. She has a strong interest in feminist institutional theory, as well as conceptual debates on regulatory pluralism and contested notions of (gendered) order as they are evident in local and global politics. Since the early 2000s, she has conducted research in the Pacific Islands region focusing on gender politics, gendered security and post conflict transition in Fiji, New Caledonia and Bougainville. She has worked in collaboration with women’s organisations and women decision-makers and women policy-makers in these settings to progress aspects of this work. In 2012, her work received national recognition when she was awarded an Australian Research Council Discovery Early Career Researcher Award for a 3-year study into the relationship between women’s participation in decision-making and their physical security in the Pacific region.