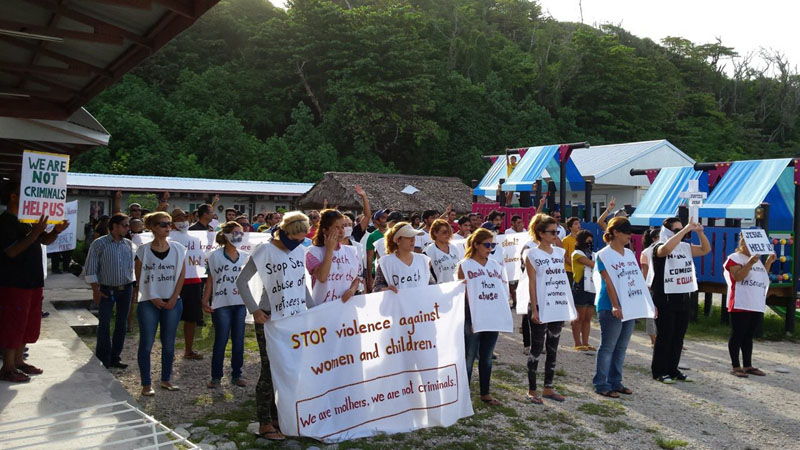 Recently, Nauru (whose delegation was led by Minister for Justice David Adeang) appeared before the Human Rights Council in Geneva as part of the second Universal Periodic Review (UPR) cycle. In this post, we explain what the UPR is and what, if anything, Nauru’s recent participation adds to what we know about governance in that country.

What is the UPR?

By a resolution adopted in March 2006 [pdf], the UN General Assembly established the UN Human Rights Council and charged it with various tasks including the conduct of a Universal Periodic Review (UPR) of the human rights performance of every UN member state. All 193 UN member states had their first UPR in the period April 2008 to October 2011. The second UPR cycle commenced in June 2012 and will be completed in November 2016.

The UPR process is detailed in a resolution adopted by the Human Rights Council in June 2007. Each review is conducted by a working group consisting of all 47 members of the Human Rights Council and takes the form of an interactive dialogue between representatives of the country being reviewed and the working group. Other UN member states are also able to participate in the dialogue if they wish. The dialogue is informed by a report submitted by the country being reviewed, a compilation of relevant UN documents prepared by the Office of the UN High Commissioner for Human Rights, and “additional, credible and reliable information provided by other relevant stakeholders”.

The 2007 Human Rights Council resolution provides that each member state’s performance is to be measured against its obligations under the UN Charter and the human rights treaties to which it is a party, any voluntary commitments it has made, the standards set out in the Universal Declaration of Human Rights, and “applicable international humanitarian law”. It also provides that the outcome of the review process is to take the form of a report containing a summary of the review proceedings, conclusions and/or recommendations, and any voluntary commitments made by the country being reviewed. In a further resolution adopted in April 2011, the Human Rights Council indicated that second and subsequent reviews of a country should focus on the implementation of recommendations made in the previous review and any developments in its human rights situation since that previous review.

How did Nauru fare in Geneva?

The UPR process is wide-ranging and, on paper at least, extensive. As is the case with many small developing countries, Nauru struggles to keep up with reporting commitments and on following through on undertakings that were made during the first UPR cycle. The Human Rights Council spends a lot of time urging countries such as Nauru [pdf] to ratify treaties, adopt voluntary protocols and submit outstanding reports.

Nauru was a focus of particular attention in Geneva for two reasons. One is the use of Nauru by the government of Australia as an offshore processing centre for asylum seekers. The other is the continuing concern about the parlous state of democratic governance and the rule of law in that jurisdiction (for previous analysis of this, see here, here and here).

The UPR session saw the Nauru delegation asked questions about restrictions on news reporting, changes to the criminal code that limit freedom of expression, blocking of social media, suspension of MPs from Parliament and, very particularly, the removal of Roland Kun’s passport.

The responses of Minister Adeang reveal a lot about the thinking that informs decisions of the Nauru government at this time. In relation to concerns raised about the massive hike in visa application fees for foreign journalists, he restated his position that this is to prevent irresponsible reporting on the operations of the regional processing centre, which may undermine sensitive relationships between asylum seekers and the wider Nauruan population. However, the most striking statement that he made was that the reason for the seizure and cancellation of opposition MP Roland Kun’s passport was “to allow the due process of an individual charged with a crime is facilitated and are in line with the laws of Nauru”.  These supposed charges relate to a protest outside Parliament earlier in the year. Despite the fact that the cabinet has determined this protest to be a ‘riot’, no charges have been laid against anyone, including Roland Kun. Mr Kun has accused Minister Adeang of lying to the UN Human Rights Council.

The UPR session saw Australia make the most critical public statement yet about the deteriorating state of democratic governance on Nauru. This is to be welcomed and should form the basis for more and stronger advocacy on the part of Australia in its own right as well as in its capacity as a member of the Pacific Islands Forum. Unfortunately, Australia’s credibility on human rights has been significantly undermined by its poor showing in the UPR review of its own performance conducted on 9 November. Among other things, Australia’s maintenance of offshore processing centres in Nauru and Papua New Guinea attracted criticism from a large number of countries.

Since Australia’s ability to play a watchdog role in relation to Nauru is clearly compromised, it is necessary for other states and international agencies to maintain their interest in the state of governance on Nauru. Minister Adeang said he welcomed visits from international agencies with open arms, although it is likely that Amnesty International is not at the top of the list of organisations he would like to see taking him up on that.

So, does what happened during the Nauru peer review by the UPR process matter? At the conclusion of the first cycle of the UPR process, the legal academic Elvira Dominquez-Redondo [paywalled article] was largely positive about the process, with its focus on cooperation that had garnered 100% participation and a dynamic that was based around high-level political engagement. However, as can be seen from the Nauru experience in the second cycle, there is little to suggest that participation in this process has done very much to prompt meaningful action on the part of government to address issues identified in the past or pre-empt (and avoid) censure that might arise in the future. There is no enforcement mechanism attached to the UPR process, leaving public embarrassment (to which some are more susceptible than others) as the only ‘punishment’ for transgression.

Meanwhile, Roland Kun’s case seeking return and reinstatement of his passport is making slow and painful progress through the Nauruan courts.

Dr Savitri Taylor is an Associate Professor in the Law School at La Trobe University, Melbourne. She spent a month in residence at Devpolicy in November 2015. Her main area of research interest is refugee law and asylum policy at the national, regional and international level.