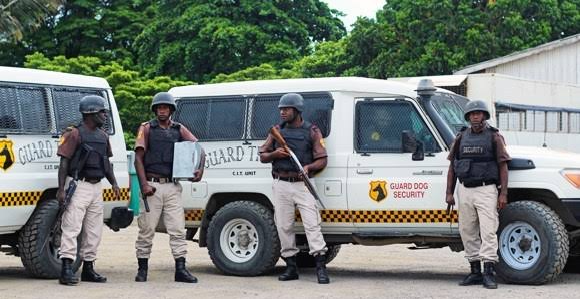 With its notoriously under-resourced and thinly-spread police force, ourselves and others (see here and this PDF) have long argued that innovative responses to Papua New Guinea’s security problems are needed. Recently, on this blog, Miranda Forsyth and Fiona Hukula have again called for donors and policy makers to move away from exclusive reliance on state security services. They argue that donors and others should support the unofficial policing coalitions of state and community-based actors that operate in many parts of the country. We agree.

Given the resources available to PNG’s booming private security sector, we argue that they constitute another key node in these networks of security providers. In this blog, we draw on preliminary conversations with PNG-based security companies to show how they are already connected to a wide array of state and community security actors in different areas. We suggest the role of private providers in PNG’s networked security assemblages will be crucial for reframing more effective and sustainable approaches to improving security provision in the country.

Private security and the police

A close and increasingly interdependent relationship already exists between the police and elements of the private security industry and is most evident in PNG’s main urban centres. The larger companies are involved in many of the same kinds of policing activity as their uniformed colleagues, including crime prevention, investigations and responding to incidents. Senior company managers often have police backgrounds and maintain strong networks within the Royal PNG Constabulary (RPNGC). Some companies are reputedly owned by retired senior police officers, and there are rumours that some serving officers have active interests in particular firms. Although not as prevalent as in countries like South Africa, some company employees are also reserve constables in the police, wearing uniforms and exercising the same powers as regular officers in this (part-time) capacity.

Relationships between individuals in the private sector and the police are widely acknowledged as mutually beneficial. Some larger operators provide food, help buy uniforms, supply fuel and maintenance for police vehicles, and, sometimes, allowances when working together. Informal networks facilitate critical intelligence sharing. Superior resources available to high-end private operators include sophisticated communications, surveillance and tracking systems that are unavailable to the RPNGC. It’s a two-way street. Private providers are also reliant on police support when they apprehend suspected offenders or face violent confrontations in the course of their work.

While private security firms are highly exclusionary in that they provide their services for a fee, more established operators seek to maintain strong and enduring relationships with their surrounding communities. Again there is a powerful element of self-interest and mutual benefit. In urban contexts, firms want a secure base from which to operate from and where many of their employees reside. We know of one company that delivers community awareness around security issues and provides water to the adjoining settlement during times of drought. Some other companies provide sports equipment to local youth. Surrounding communities are an important source of criminal intelligence and potential recruits.

While the character of relationships vary within and between urban centres, different dynamics are evident in interactions between communities and security companies in rural areas. This is particularly so in the case of landowner-owned security firms working around extractive projects. While offering potentially lucrative rewards and a welcome source of employment in underdeveloped regions, the kinship and other ties binding such companies and the communities in which they operate can lead to social complexities and challenges not encountered in the more heterogeneous urban setting. For example, the employment of fellow tribesmen/women can make disciplining and managing employees difficult. As a result, some landowner security companies chose to partner with international or other ‘outside’ firms to help manage these issues.

It is widely believed that members of the political elite are strongly invested in the private security industry. For example, MP for Lae Open, John Rosso, is a reserve police chief sergeant and owner of Executive Security Services (ESS), with a current workforce of over 1,500. Rosso started ESS before he became an MP in 2017. While social media is awash with rumours connecting PNG’s politicians, including former Prime Minister Peter O’Neill, to particular security firms, the exact number and nature of the connections are often hazy. However, there is no doubt that owning a security company can aid some political hopefuls. Employing large numbers of constituents can help guarantee votes, particularly in areas with few other employment opportunities.

Some claim politically aligned firms are more likely to receive government contracts. It is also likely that firms involving politicians are more likely to be paid: MPs are in a better position to squeeze money out of an increasingly cash-strapped government than others. Indeed, our conversations indicate that many private security firms without political connections refuse to bid for government contracts because they worry they won’t get paid. On the other hand, political instability can mean companies that are closely aligned with political powerbrokers risk losing their advantage, with changes in government and political leadership contributing to the noticeable fluctuations in the fortunes of a number of well-known companies.

Networks within and between private security companies

As we have previously noted, there are an array of private security firms operating in PNG, varying considerably in size, services offered and the geographic spread of operations. They range from small-scale local companies with one car and a few guards through to substantial multinational companies with a global reach. The latter can draw on an impressive array of transnational ideas, resources and cutting edge technologies. For example, G4S Secure Solutions (PNG) is part of the largest security company (and one of the top three private sector employers) in the world with over 620,000 employees globally and contracted sales of over £7.8 billion in 2017 alone.

While transnational connections within companies can shape security provision, relationships between private firms operating within the country can be fractious. There are occasional attempts to encourage information sharing and cooperation; however, private security firms are often fiercely competitive. We have heard numerous accounts of physical altercations involving guards from rival private security firms. This can happen when a business or government department replaces one security firm with another. When guards from the ousted security company lose their job, some take their frustrations out on the newly employed guards.

In sum, while many think of private and state security as separate, our preliminary findings suggest that the private sector is thoroughly integrated within PNG’s broader security network. It is this broader network, comprising ever-shifting relations between different providers, that determines the nature of security governance in PNG. In turn, if we are to move beyond the same old approach to police support that has been relied upon for the past three decades with singularly modest results, we need to begin by acknowledging and responding to the networked reality of security provision in PNG.