A report released earlier this month contains the findings of the first nationally-representative, demand side surveys of financial inclusion in Fiji, Samoa, and Solomon Islands. Conducted in early 2015 by the Pacific Financial Inclusion Programme (PFIP), the summary report [pdf] provides a number of insights into the ‘rich, varied, and active financial lives’ (p. 1) of Fijians, Solomon Islanders and Samoans.

The report’s headline findings show variation in formal financial inclusion across the three countries. While the majority (60 per cent) of Fijian adults have an account with a commercial bank, only a quarter of Solomon Islanders do, with Samoans falling roughly in the middle at 39 per cent.

Stark differences in access to financial service points are an important contributing factor. While it takes Fijians and Samoans 45 minutes on average (median 15 minutes) to reach their nearest bank branch, the average Solomon Islander must travel for upwards of 3 hours (median 60 minutes). More than 14 per cent of Solomon Islanders live more than a day’s travel from their nearest bank branch. And the average cost of accessing the nearest bank branch in Solomon Islands is US $8.67 each way – nearly double the annual GNI per capita per day – as compared to $3.33 in Fiji and $2.21 in Samoa. ATMs and bank agents are relatively more accessible in terms of distance and time, but not cost.

Related to access, the report notes substantial differences in financial inclusion between those living in rural versus urban areas, by income level, and by income source (formal employment versus agricultural and casual labour).

The surveys also revealed some noteworthy findings around the gendering of financial inclusion. Unusually both for the region and globally, slightly more women than men are banked in Samoa (40 vs 38 per cent), though the reasons for this are not clear. By contrast, women are 16 percentage points less likely in Fiji, and 12 percentage points less likely in Solomon Islands, than men to have a bank account. However, across all three countries there is little gender difference in saving or borrowing behaviour generally, suggesting there is not a gendered difference in demand for financial services.

Of particular interest is the data collected on remittances, a key source of income across the Pacific. However, the report shows there are distinct patterns in different countries. In Samoa, where remittances account for some 20 per cent of GDP, 56 per cent of Samoan adults received remittances in the last year. 97 per cent of these were sent from overseas. By contrast, 89 per cent of remittances received in Solomon Islands were domestic, and were received by 36 per cent of the population. 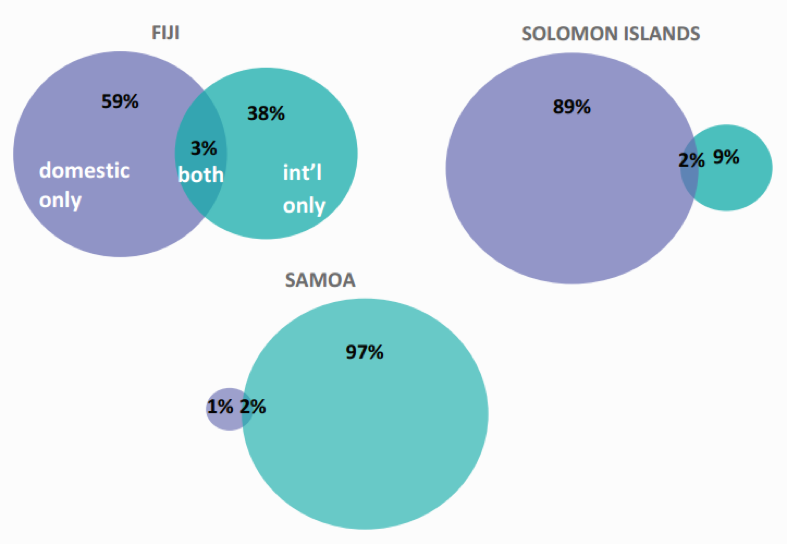 The summary report, as well as detailed country reports, can be downloaded from the PFIP website here. PFIP’s press release also notes that it plans to undertake similar surveys in Vanuatu and Tonga later this year.