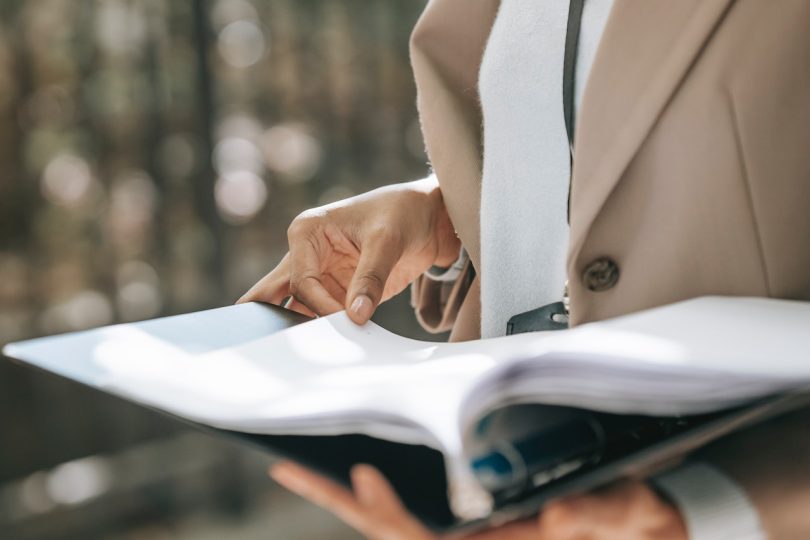 A significant amount of Australian aid is delivered by private sector contractors. This blog asks two key questions. What share of contracts go to Australian contractors? And how competitive is the contracting market?

The blog is based on my analysis of procurement data for the Australian aid program from AusTender, from 2004-05 to 2021-22. In 2020-21, the estimated annual procurement value (adjusting for the fact that nearly half of the contracts are multi-year) was $1.37 billion, or about 30% of Australia’s aid budget. This is larger than the official figure of aid flows to commercial suppliers (21% in 2020-21) due to differences in calculation methods, as the latter is calculated by adding up total value of new contracts awarded in the year and extensions of past contracts. 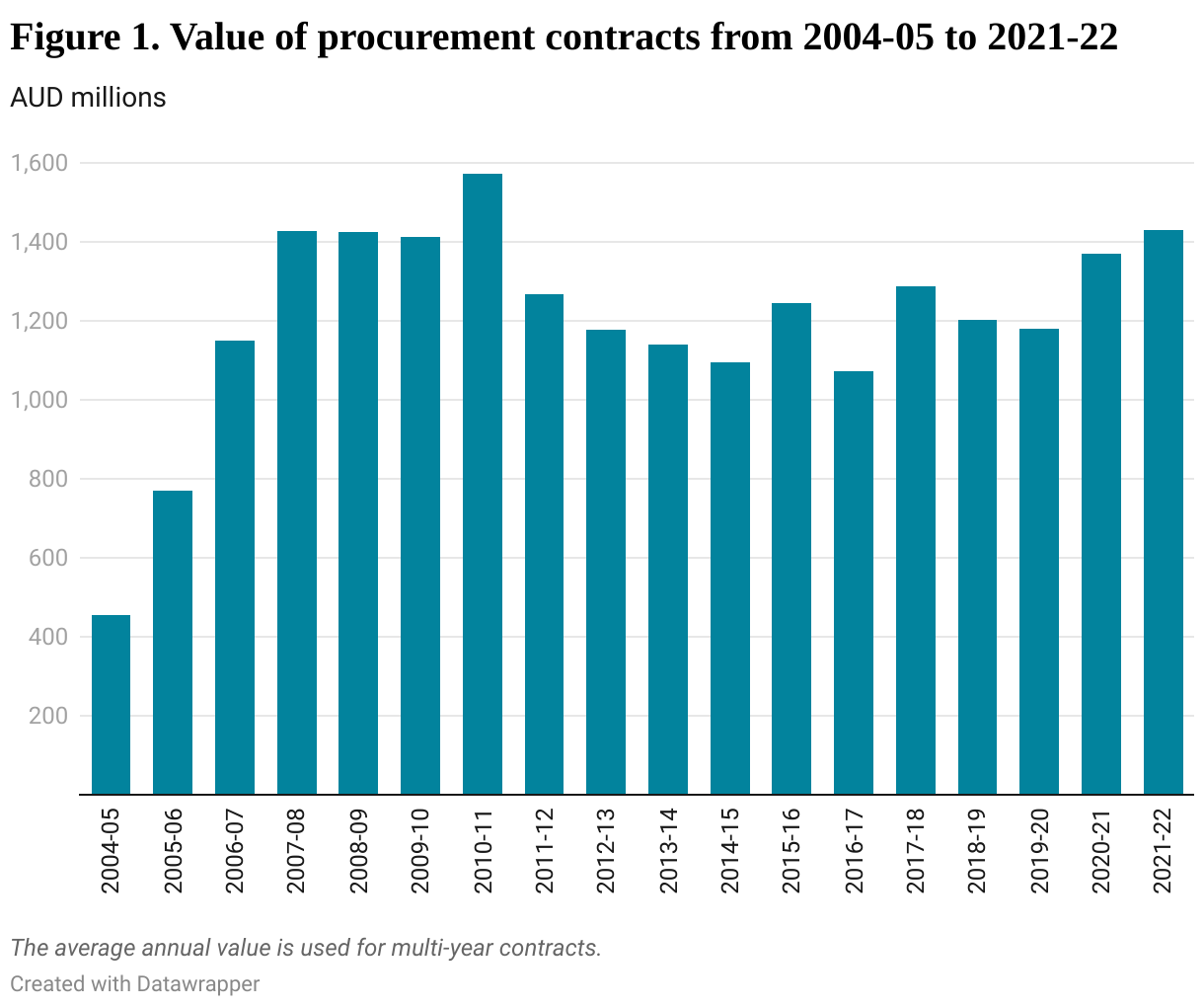 This gives us some assurance that the data is comprehensive. The analysis that follows is conducted in terms of total contract value rather than imputed annual amount unless otherwise stated. We define an Australian supplier as a supplier registered in Australia.

The share of contracts awarded to Australian suppliers dropped significantly after the Australian government officially untied its aid and allowed international tenders, in April 2006. It reached a low point in 2012-13, when Cowater International from Canada and Research Triangle Institute from the US received 33% of the total value of contracts awarded. However, the share of contracts going to Australian suppliers soon picked up again and has remained above 90%. Companies registered in developing countries have received only about 1.2% of total contracts each year over the past decade. 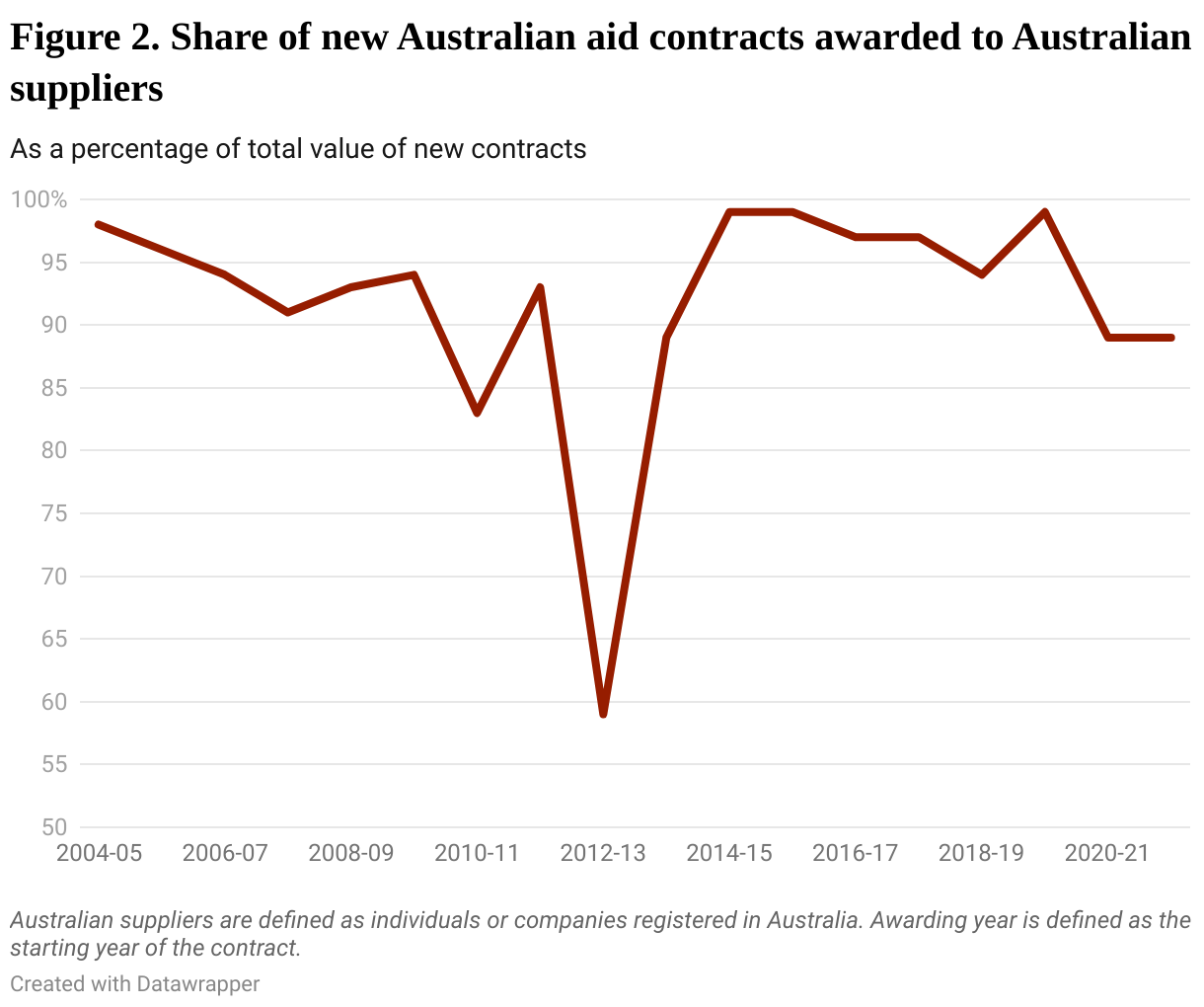 Compared to other DAC (Development Assistance Committee of the OECD) donors, Australia has a high share of contracts awarded to domestic suppliers. While such a high share is often associated with the formal tying of aid, in Australia this is not the case. In principle, Australian aid is untied: all suppliers are allowed to participate in tendering regardless of where they are registered. So why are Australian-registered companies more likely to win the contracts?

There are three reasons. Most Australian aid is provided to the Pacific Islands and Southeast Asia, where Australian companies have a lot of experience. The Australian government has also increasingly preferred to tender large aid contracts (see below), which advantages national suppliers. Finally, many Australian aid contractors are now affiliated with international partners or are themselves multinationals.

In 2014, the Australian government set the target of reducing the number of individual investments by 20% by 2016-17 in an effort to reduce fragmentation, cut administrative costs, and improve the operating efficiency of the aid program. Facility arrangements were increasingly used to group together multiple investments into a facility under a single contractor. As a result of this change and overall aid cuts, the number of new procurement contracts awarded each year since 2014-15 was only a quarter of the pre-announcement level. Meanwhile, contracts became bigger and longer. The average contract value more than quadrupled from 2013-14 to 2017-18, before falling again, perhaps because facilities fell out of favour. 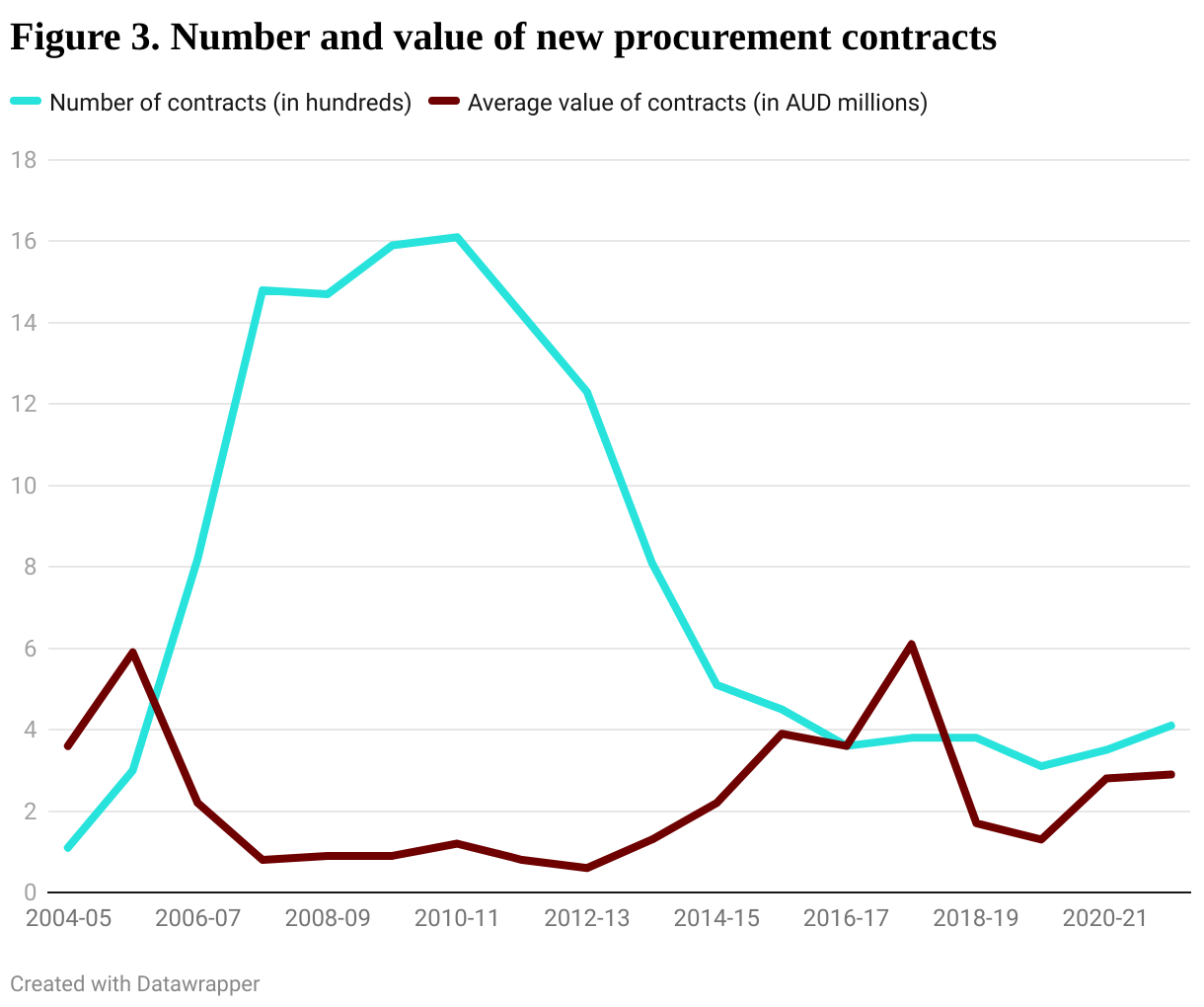 A direct result of the shift to larger contracts and use of facilities has been the increased concentration of the aid contracting market. Concentration of the contracting market has also occurred through mergers and acquisitions. The competitive landscape has changed considerably as the number of contracted suppliers with active contracts dropped from 900 a decade ago to around 250 in 2021-22.

The growing number of large contracts favouring large contractors, and mergers and acquisitions between companies, have made the big players a lot more powerful. From 2011-12 to 2021-22, the market share of the top three suppliers increased by 12%, the top five by 14% and the top ten by 9%. And in 2021-22, the top ten out of a total of 255 suppliers accounted for over 80% of the market. 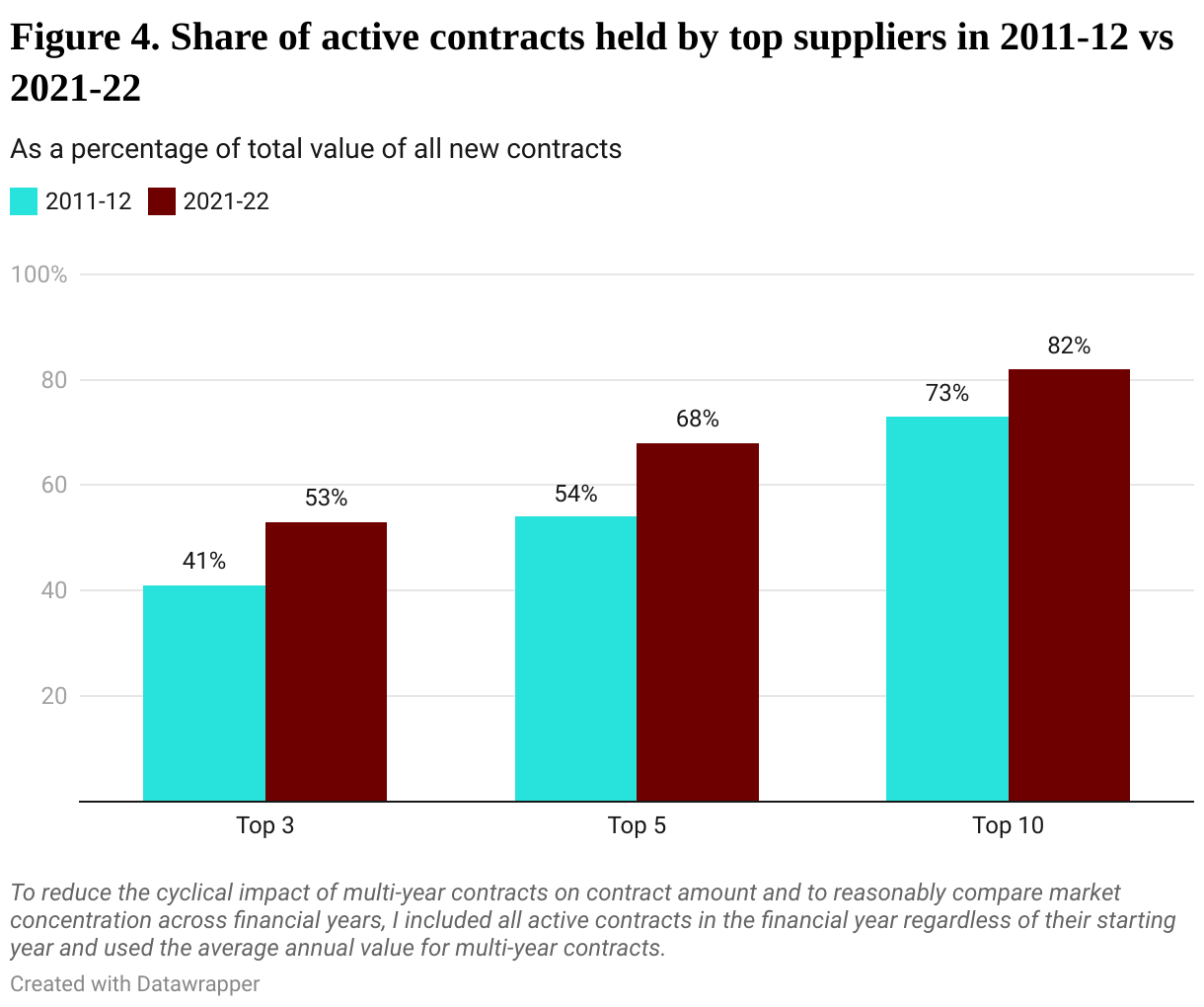 Although there is churn among the smaller suppliers, over the past decade, four of the top five suppliers have maintained their leading positions in the aid contracting market. These are Abt, Cardno (now DT Global), Coffey (now Tetra Tech) and Palladium. Two of them had portfolio values from all their active contracts in excess of $1 billion in 2021-22, well above the rest of the suppliers, with Abt almost hitting the $2 billion threshold. 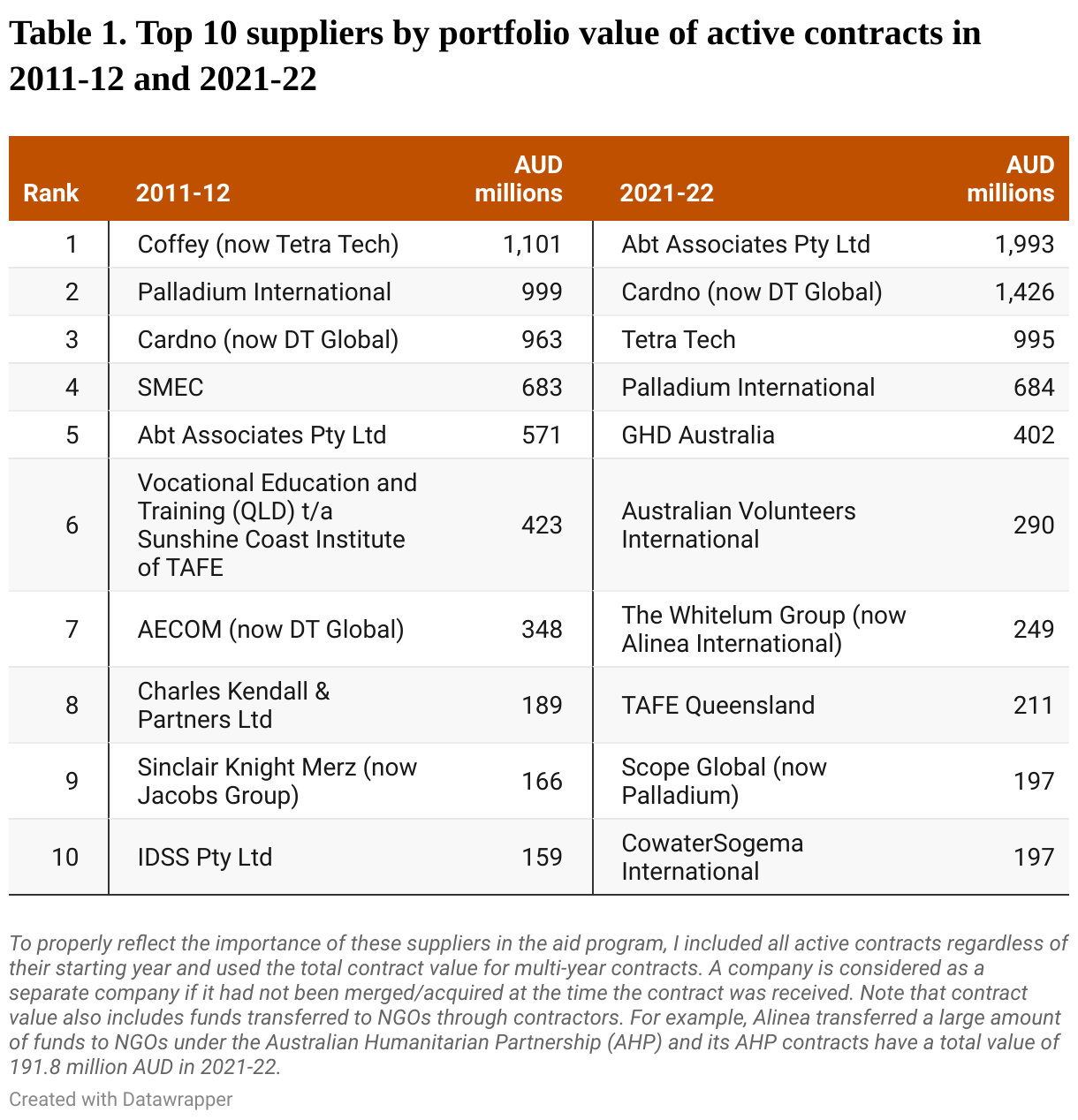