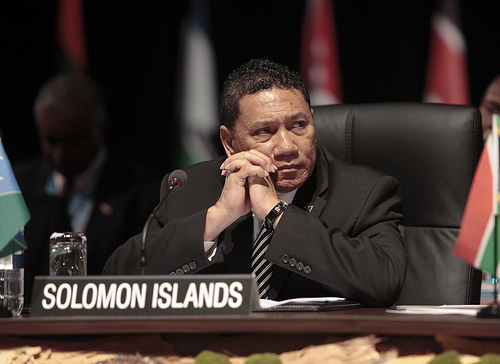 Russia’s courting of Pacific island states continues to cause political fallout, with the Solomon Islands foreign minister, Peter Shanel, sacked by Prime Minister Gordon Darcy Lilo. This was for allegedly agreeing to forge closer diplomatic relations during a recent meeting with Russian foreign minister, Sergei Lavrov, in Fiji. Russia claims that the issue of recognition for its proxy states Abkhazia and South Ossetia was not raised in any meetings, but is offering more general bilateral assistance to Pacific countries as Russia follows the US in its ‘pivot’ towards the Asia Pacific region. Amidst speculation that Prime Minister Lilo plans to remove another four ministers, Mr Shanel says claims that his sacking over the Russian issue was a cover up and that his removal was pre-planned.

Politicking in Solomon Islands was temporarily put on hold as the nation gathered to farewell elder statesman and first governor general, Sir Baddeley Devesi, at a state funeral service in Honiara.

Trading beyond fish and coconuts

The existing trade agreement between Pacific island countries will be expanded to include the liberalisation of the service sector. Trade officials have agreed to develop a schedule of commitments under the Pacific Islands Countries Trade Agreement to open up economies to other island countries, with a focus on tourism, transportation and business services. This move signals a potential advancement in intra-regional trade and recognises that the future of the small island economies is based on trade in services rather than goods.

At the same time, it was announced that Dr Edwini Kessie has been appointed as Chief Trade Adviser for the Pacific island countries. The appointment of Dr Kessie, a Geneva-based international trade law expert, comes ahead of the next round of talks between island countries and Australia/New Zealand on the Pacific Agreement on Closer Economic Relations (PACER Plus). Though this recent piece by Wesley Morgan suggests that Australia has lost interest in PACER Plus.

US budget and military scale down

Despite a tough fiscal year ahead, US President Barack Obama has proposed a 2013 financial year budget of US$575.3 million for the Office of Insular Affairs (increased from US$464.3 million), which includes US$238.9 million in payments (increased from US$232.1 million) to the three freely-associated States in the Pacific (Republic of the Marshall Islands, Federated States of Micronesia and Palau) under their Compacts of Free Association.

Budget and strategic pressures are reflected in the likely scaling back of the US$23 billion military buildup on Guam, with the number of proposed marines dropping from 8,000 to 4,700. Guam has also raised concerns over federal ‘compact-impact’ funds proposed in the budget, saying this is not enough to deal with rising costs related to the proposed build up and pressure on local services.

Tonga’s economy continues its downward trajectory as remittance inflows fall. There has been a drop of US$48 million since 2008, indicating that the Tongan diaspora is feeling the impacts of the global economic turndown. Remittances are a key source of revenue for Tonga, with the rate of inflows second highest in the Pacific. The National Reserve Bank will host an economic dialogue next month to map out strategies to strengthen economic growth.

Nauru is the first developing country to take advantage of an international framework which sets aside areas of the seabed located in international waters (rather than within a specific EEZ) for mineral exploration and extraction. This marks a significant extension of the scope of resource use in the region. Whilst this project is described as being under ‘sponsorship’ by Nauru, it is essentially a private sector operation. Nauru Ocean Resources Inc. (NORI) in partnership with a group of former executives from Nautilus Minerals, a leading seafloor mining company already operating in PNG, is the first company to obtain a licence to explore deep sea minerals in an area reserved for developing countries. The licence has been granted by the International Seabed Authority (ISA), which oversees the United Nation Convention on Law of the Sea – a treaty signed by over 160 countries. NORI will be allowed to explore an area within international waters at estimated depths of 5,000 m, and is planning to explore deep sea minerals in a 25,000 km zone between Hawaii and Mexico later this year.

A number of countries within the ISA were opposed to the approval of the licence saying that the industry lacks regulation, and the environmental impacts remain uncertain. The secretary general of the ISA, Nii Allotey Odunton, suggested at recent meeting in Fiji that a precautionary approach will help limit the impact on deep-sea species.