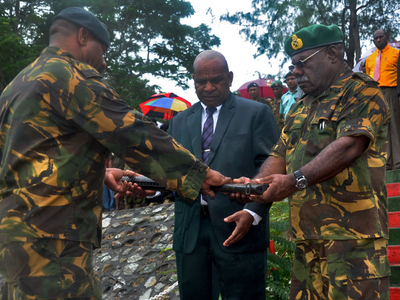 Our thoughts and prayers go out to all affected by the  floods in Fiji and the landslides and ferry disaster in PNG.

The ongoing political tension in Papua New Guinea escalated briefly last week with the  failed mutiny staged by elements of the military said to be loyal to  Sir Michael Somare. Relying on the December 2011 Supreme Court judgment, Sir Michael maintains his claim to the office of prime minister, and has filed contempt charges against incumbent prime minister, Peter O’Neill. Meanwhile, the O’Neill administration has again suspended the Chief Justice.

Dame Carol Kidu, the country’s only female MP, has responded to recent events by distancing herself from both sides to become the sole voice of the opposition.

In this opinion piece, Ben Bohane suggests that PNG has a way out of its political stalemate  – via the floor of parliament and a return to traditional kastom values by its leaders.

In other news, deforestation in PNG is increasing, with reports of record log exports in 2011. It is reported that a significant proportion of these exports are due to Special Agricultural and Business leases, which are subject to an ongoing Commission of Inquiry by the PNG Government.

While many believe the election in PNG should be brought forward to break the political deadlock, seasoned observers don’t think it possible for arrangements to be put in place before the scheduled June 2012 poll.

The third presidential election in Timor Leste will be on 17 March, with reports of over ten candidates vying for the top job, including incumbent Jose Ramos-Horta.

The French presidential election is due on 22 April. On the same day voters will elect the new French National Assembly, with two representatives from New Caledonia.

Although the parliamentary election in Vanuatu is not expected until November, campaigning has commenced and new parties are being formed.

Tough year ahead for island economies

With the ongoing euro crisis, this year will be characterised by economic volatility. The World Bank expects global growth to slow, which may impact the Pacific by reducing remittances, tourist numbers and export demand.

Fiji’s pension fund – the FNPF – is in financial strife and Dr Satish Chand suggests that it requires an injection of about 500 million Fiji dollars to become solvent. Borrowing money to shore up pension funds will be expensive, particularly if the recent credit rating cuts in the Cook Islands and PNG by S&P augurs further downgrades elsewhere in the region.

Volatile food prices are expected this year, but prospects are also favourable with global prices in decline. This should help cool high inflationary pressure and ease short-term food security concerns.

Russian foreign minister, Sergei Lavrov has made his first official visit to Fiji. With concerns that the trip is about shoring up diplomatic support for the break-away regions of South Ossetia and Abkhazia, the Georgian Ministry of Education donated 200 netbooks to Fiji.

The lifting of the much criticised Public Emergency Regulations in early January was cautiously received by some as a sign that the country was en route to the promised 2014 election.

Others have questioned whether anything really changes, especially as the  5 January Public Order (Amendment) Decree 2012 carries over or extends many of the restrictions in the previous emergency regulations by virtue of legislative amendments. The powers to detain without charge, for example, have been extended, and the jurisdiction of the courts in relation to decisions made by ‘the Commissioner of Police, any Divisional Police Commander or the Minister or any public official’ has been ousted under the amendment.

This biweekly roundup of development policy issues in the Pacific is a joint venture of the Pacific Institute of Public Policy and the Development Policy Centre. Editorial content is the responsibility of Derek Brien, PiPP Executive Director, and Stephen Howes, Devpolicy Director. This is the first Pacific Buzz for 2012.