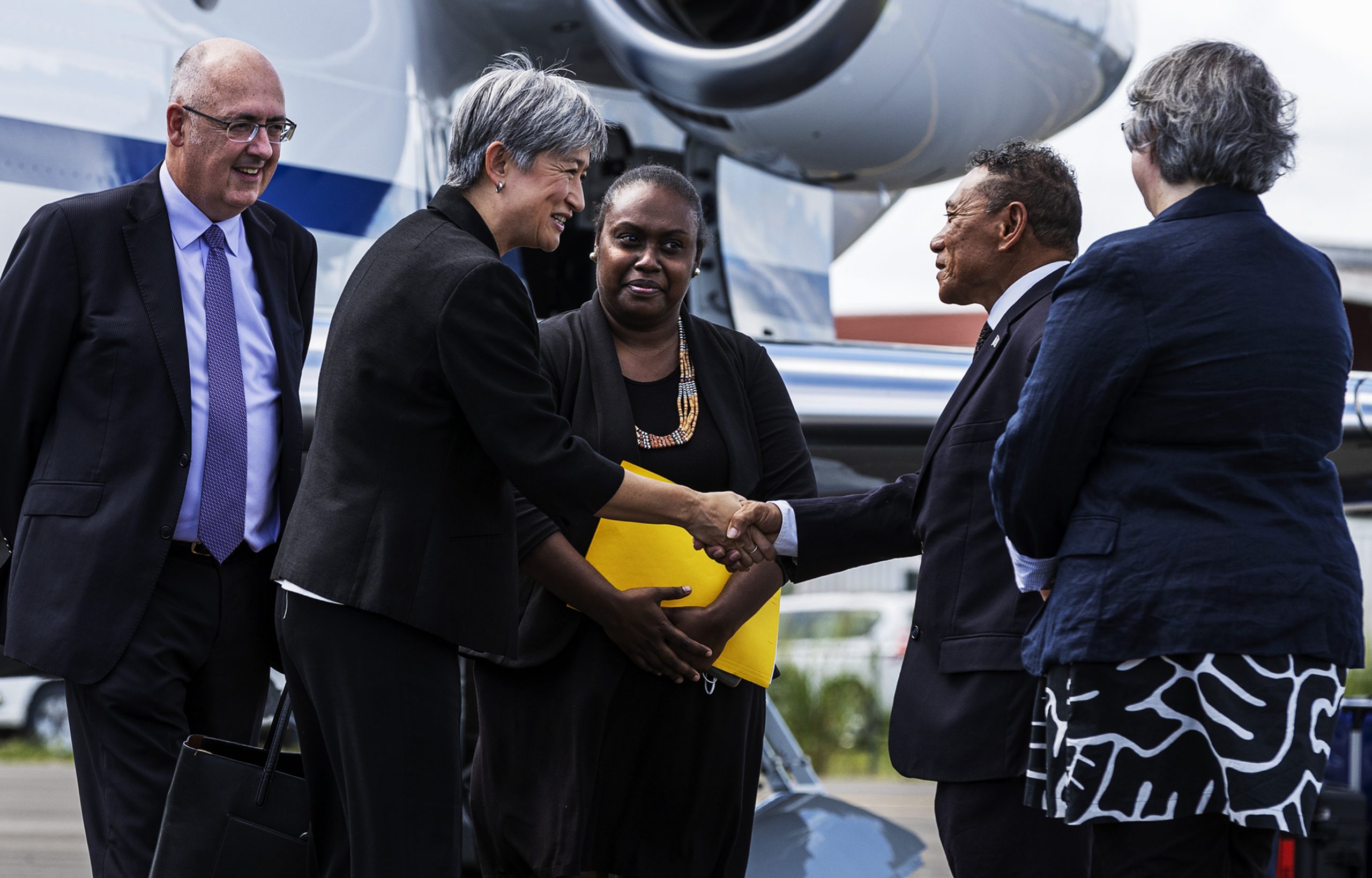 Australian Foreign Minister Penny Wong was putting it mildly when she noted in her Solomon Islands press conference in June that “there’s been a positive response” to the new Labor government’s confirmation of its election campaign announcement that it would introduce a new permanent residency visa category for the Pacific, the Pacific Engagement Visa (PEV). 3,000 visas are to be issued annually via a lottery with country-specific quotas, commencing in July 2023.

Naturally, there has been lots of interest in how the quotas will be set. Minister for the Pacific Pat Conroy has already announced that visas will be allocated on a pro rata basis, which means that bigger countries should have a higher quota. Another clarification Conroy has provided is that Timor-Leste will be included in this visa.

But there is still plenty of detail to be worked out. The Australian government needs to be strategic and, therefore, selective in how it distributes these highly valuable visas.

Country quotas could be wasted if visas were offered to countries that already have full labour market access to Australia, France, New Zealand or the United States. We should, on that basis, exclude from the PEV all Pacific territories (e.g. Tokelau, New Caledonia, French Polynesia), the independent countries of Cook Islands and Niue (that already have automatic access to Australia through being in possession of New Zealand passports), and the Federated States of Micronesia, Marshall Islands and Palau (that already have unlimited access to the US labour market). These countries already have large diaspora populations in Australia, New Zealand, the US and/or France: they are already engaged. They are also already bound, either formally or informally, to the foreign policy of the country they have access to, so they should not be a priority from a strategic perspective.

This leaves ten countries that should be considered for PEV quotas. They can be divided into three groups: Fiji, Samoa and Tonga (countries that already have good access to Australia via their access to New Zealand, once they become New Zealand citizens); Papua New Guinea, Solomon Islands, Timor-Leste and Vanuatu (countries with very limited access); and Kiribati, Tuvalu and Nauru (climate-affected atolls).

Lower bounds will be needed for the smaller countries. It would make no sense to include a country in the PEV and then allow, say, only one family to migrate per year. The PEV should be meaningful for all countries invited to participate in it. A lower bound of 50 could be considered, with the excess taken from PNG’s pro rata allocation (since PNG, the giant of the Pacific, will be the main beneficiary of the PEV).

The table below shows a pro rata allocation across all ten countries, and then the same allocation but with the minimum of 50 imposed. The table also presents the New Zealand visa quotas for comparison. 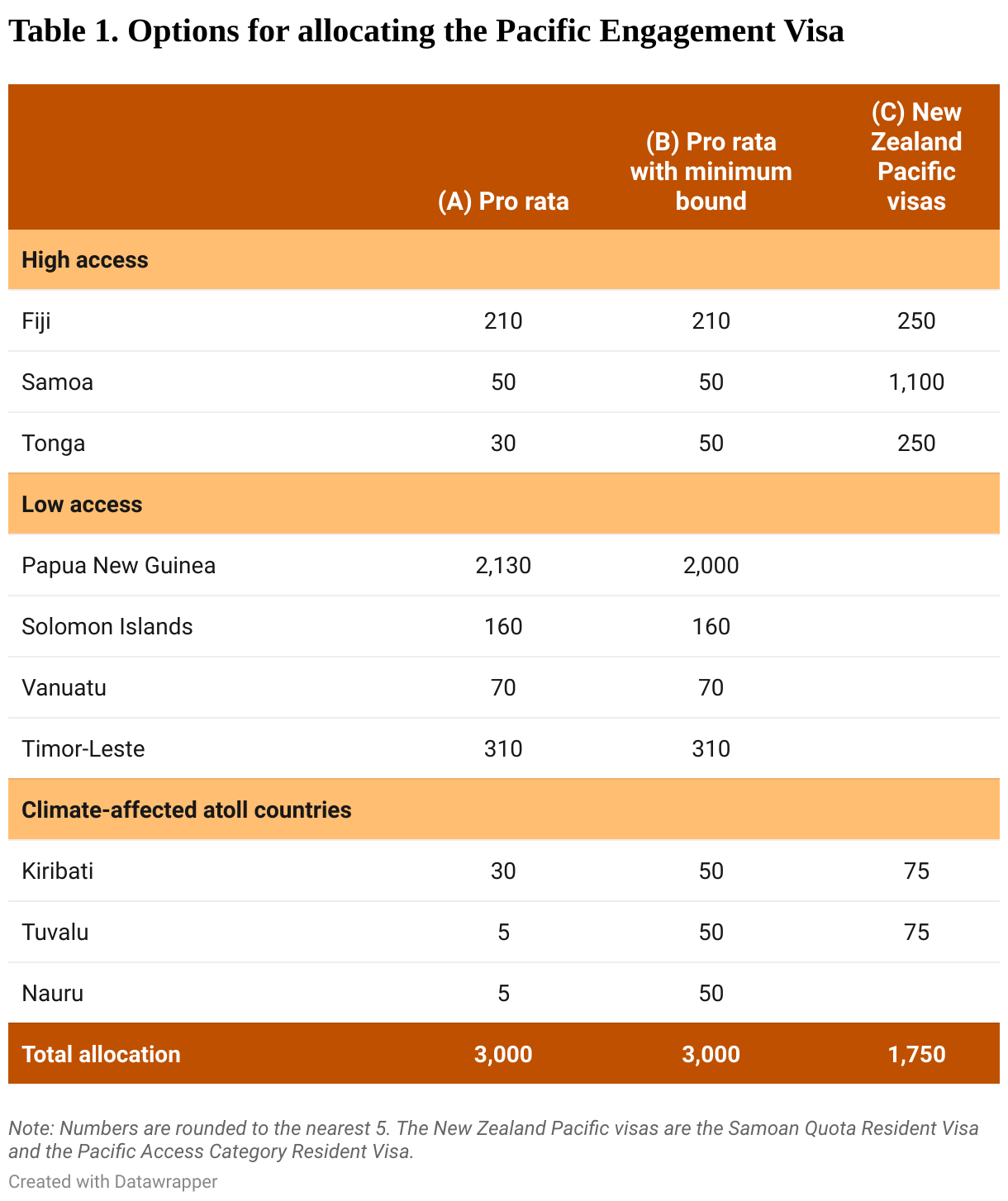 So far, I have taken the simplest definition of ‘pro rata’, that is, relative to population. Given, however, that the PEV is an engagement visa, the countries’ existing diaspora in Australia should also be taken into account. Pacific countries that have a large diaspora are more engaged than those that lack it. Indeed  it is questionable whether new visas should be offered at all to the first group of Fiji, Samoa and Tonga. These are the three Pacific countries with the largest diasporas already in Australia. They already have good access to Australia (they are already “well engaged”) through their permanent residence access to New Zealand via the Samoan Quota and Pacific Access Category (PAC) Resident Visas – the visas on which the PEV is being modelled. Fijians also utilise Australia’s skilled migration pathways. Fiji, Samoa and, to a lesser extent, Tonga are also the Pacific countries that seem most concerned with brain drain.

This logic can be made explicit by adjusting not only for population but for diaspora. Table 2 has information about population and the Australian diaspora for the ten countries. The range is amazing: from a diaspora/population ratio of 38% for Samoa to the same ratio of only 0.2% for PNG, and less than 1% for Solomon Islands, Vanuatu, Timor-Leste and Kiribati. This additional information suggests some new rules.

I keep the minimum of 50 but now say that, to fulfil the new visa’s function of promoting engagement across the Pacific, no country with a diaspora/population ratio in excess of 10% should have a quota more than 50 (as such a country is already engaged), and any country with a ratio of less than 1% should have a quota of at least 100 (as such countries are currently highly marginalised), with this amount again taken from PNG. The final recommended allocation, defined on this basis, is presented in Table 2. 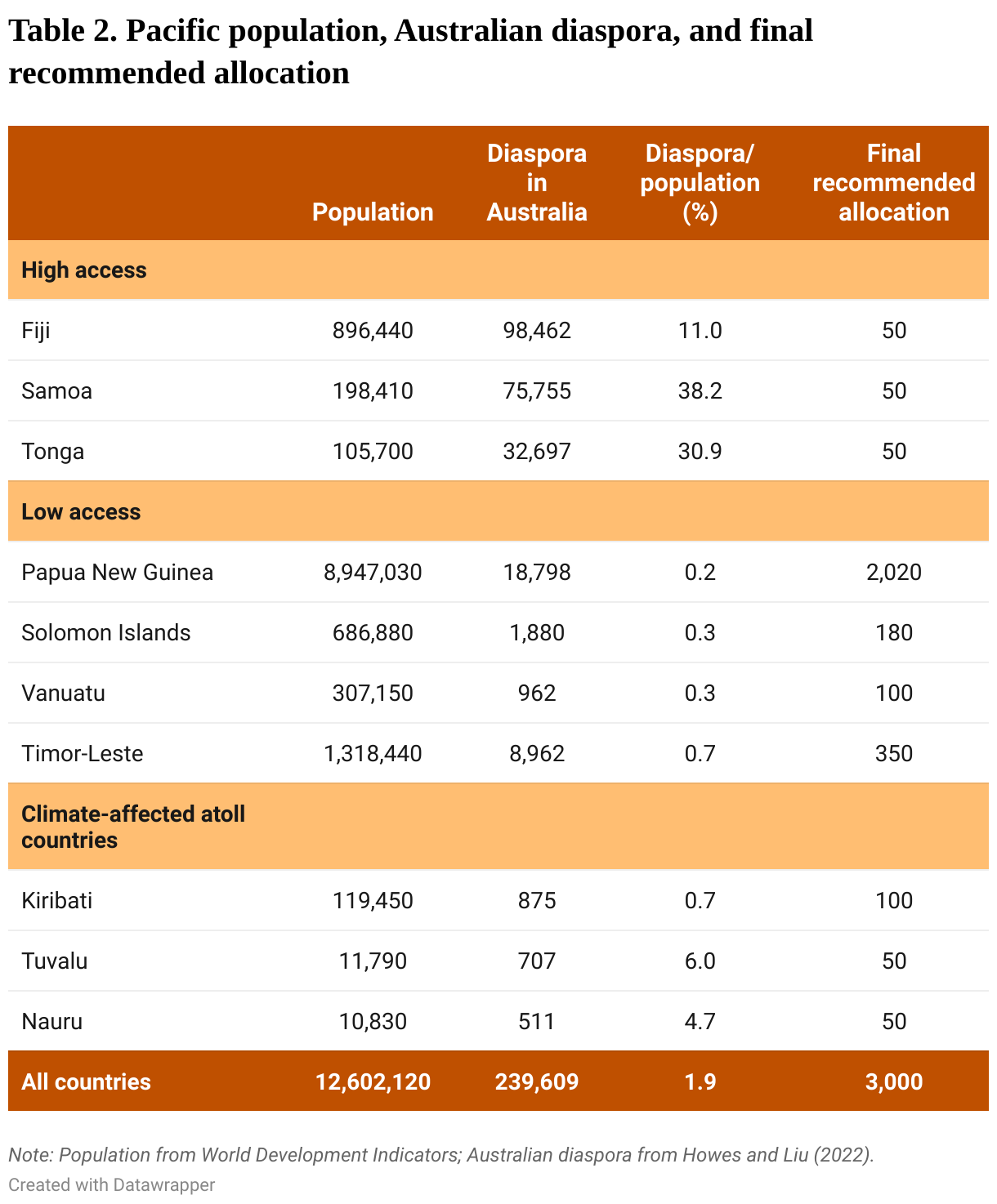 The biggest beneficiaries from taking diaspora size into account are Kiribati (whose allocation doubles from 50 to 100) and Vanuatu (whose allocation increases from 70 to 100). The loser is Fiji (down from 210 to 50).

The point of this blog is not so much the specific numbers, but the underlying idea that PEV country quotas should be allocated strategically and, therefore, selectively. While the government’s intention to distribute visas on a pro rata basis makes a lot of sense, it does not take us all the way. In addition: