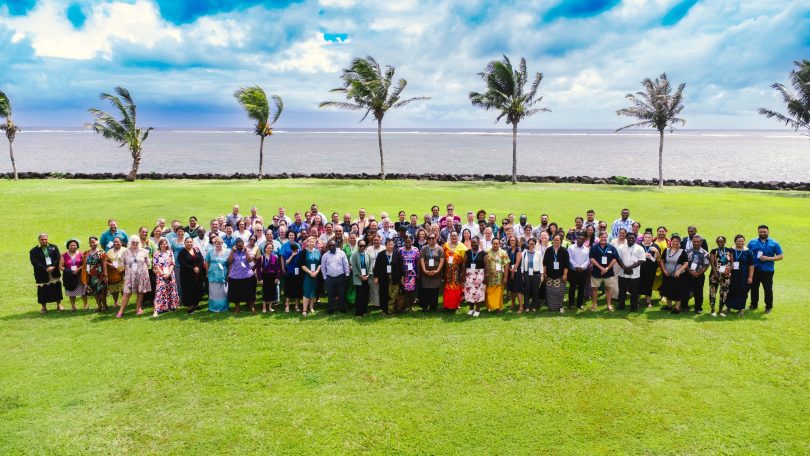 Participants at the 5th PLMAM in Apia, Samoa (PACER Plus/Facebook)

In early November, over 150 delegates from around the Pacific, including government and employer representatives from Australia and New Zealand, gathered in Apia, Samoa for the fifth Pacific Labour Mobility Annual Meeting (PLMAM). The PLMAM has been established as the preeminent regional meeting on labour mobility, designed to advance regional cooperation under the Arrangement on Labour Mobility (ALM) which sits alongside the PACER (Pacific Agreement on Closer Economic Relations) Plus trade agreement.

This year’s PLMAM, organised by the PACER Plus Implementation Unit (PPIU) under the overarching banner “Reinvigorating labour mobility cooperation for development”, was, we believe, the best PLMAM to date. Held over a four-day period, the well-organised conference provided a valuable opportunity for key stakeholders from across the region to engage on a range of labour mobility issues.

The aim of PLMAM is, however, to achieve consensus; the final PLMAM Outcome Statement is a negotiated document that must be agreed by all PACER Plus signatories (as the ALM requires). This raises the question of what PLMAM can realistically achieve in terms of practical solutions to country-specific problems. As Richard Curtain has previously argued, “[can] PLMAM as a regional meeting … be anything more than a talkfest”?

The Pacific Participant Caucus, held on Day 1, was a closed session for Pacific PACER Plus signatories only. This meant that delegations from Fiji, Papua New Guinea and Timor-Leste, who are not parties to the agreement, were excluded. This is a major anomaly of PLMAM, because these are the largest countries in terms of their populations who are eligible to send workers to Australia and New Zealand (excluding Timor-Leste), under the existing programs.

The purpose of the Pacific PACER Plus signatories-only initial meeting was to identify key issues and to form a consensus position on some of the intended outcomes of the wider meeting. A series of discussion papers prepared by the PPIU – covering topics including increasing the effectiveness of the ALM for participants, improving coordination and cooperation between Pacific labour sending countries, and improving coordination to support Pacific qualifications recognition – were presented to the caucus for their review and approval. By all accounts, these discussions were at times intense but fruitful for participating countries.

Day 2 of the conference focused on labour demand and supply. Australia and New Zealand presented on future plans and proposed reforms to their respective Pacific labour mobility schemes. The Cook Islands and Niue, as labour receiving destinations, also gave updates on their own labour shortages, and the role that intra-Pacific labour mobility might play in addressing these gaps.

Individual Pacific countries presented on their labour sending arrangements, outlining success factors and constraints to effective engagement in the Australian and New Zealand schemes. Constraints tended to be of an operational nature, such as tight timeframes to mobilise workers to Australia and/or New Zealand. More sensitive issues including “brain drain” – which is of growing concern in Samoa (the host of PLMAM 2022), Fiji and Vanuatu – were not raised. Pacific officials may have felt such a public forum was not the appropriate place to address these complex issues.

Presentations by employer representatives from Australia and New Zealand concluded Day 2. The Approved Employers of Australia association has recently cited concerns of over-recruitment from the major source countries (Samoa, Tonga and Vanuatu), and the need to switch recruitment to countries with much larger working age populations but relatively low participation rates in the Pacific Australia Labour Mobility (PALM) scheme (for example PNG and Timor-Leste). Surprisingly this issue was not discussed in any depth at PLMAM.

More regular and extensive consultation with Pacific stakeholders by Australia and New Zealand on policy and operational aspects of their respective Pacific labour schemes was a repeated request from Pacific delegates. For the ALM to deliver on its objective to “enhance labour mobility schemes to maximise the development benefits for participating countries”, Pacific stakeholders said they wanted to be consulted as equal partners on any proposed reforms.

Reintegration of workers back into their home economies was high on the agenda in Day 3’s development impact workshop. The International Organization for Migration presented on an integrated approach to reintegration, providing some international best practice examples and noting “sustainable reintegration is achieved when returnees have reached levels of economic self-sufficiency, social stability, and psychosocial well-being that make their further migration decisions a matter of choice, rather than necessity”.

Two best practice examples from across the region were shared. Peter Bumseng from Vanuatu spoke on the success of the Strengthening Seasonal Workers Family Program, and Tuatagaloa Joe Annandale spoke about recruitment in Faleali’li and returned worker Tumanuvao Pualele Fiu’s successes in setting up new businesses. Sharing best practice examples is helpful, but whether specific programs can be replicated in different Pacific countries, each with their own social, cultural and environmental contexts, requires careful consideration. Implementation of reintegration initiatives, including funding arrangements, can only be addressed through country-specific efforts which will involve trial and error.

Since the last in-person PLMAM in October 2019, the regional labour mobility landscape has changed dramatically. During the 2018-19 financial year, the numbers entering New Zealand under the Recognised Seasonal Employer (RSE) scheme (12,581) were comparable to those entering Australia under the Seasonal Worker Programme (12,202) and Pacific Labour Scheme (192) (now aligned under the single PALM scheme). With the recent rapid scaling up of PALM, Australia is now the dominant player. During 2021-22, 18,202 visas were granted to PALM workers, virtually double the number (9,423) of RSE arrivals over the same period.

Unsurprisingly, Australia’s PALM scheme was the focus of discussions during much of the conference. Key issues related to PALM included standards of worker accommodation, worker disengagement from the program, enhancing and protecting worker wellbeing, and operational issues such as better predeparture briefings, workers’ easier access to superannuation, and meeting deployment timelines. Pacific delegates put forward the need for a cultural competency framework to be developed for use in Australia and New Zealand. They also requested that employers have access to cultural competency training.

The CEO of Samoa’s Ministry of Commerce, Industry and Labour, Pulotu Lyndon Chu Ling, closed the 2022 conference by calling for “practical solutions to our longstanding problems”. This statement alludes to the fact that many of the issues raised during the 2022 PLMAM are not new – they are, in fact, regularly on the PLMAM agenda. This begs the question: is PLMAM – a regional meeting with reaching consensus at its core – the best format for problem solving?

As Richard Curtain suggested after a previous PLMAM, problem solving is likely better achieved through bilateral or trilateral consultations, with Australia and/or New Zealand on the one hand and the sending country on the other. These country-to-country negotiations, where each party’s accountabilities are explicitly stated, should not be restricted solely to governments; employer and worker representatives should be included as key stakeholders.

PLMAM’s primary utility as a mechanism for promoting regional cooperation on labour mobility is that it brings key stakeholders together in one place to engage in dialogue and share experiences. In this regard, it remains a useful initiative to complement bilateral discussions (as per the ALM). In the future, as intra-regional labour mobility likely grows, and there are efforts to promote regional approaches to the management of labour migration, PLMAM’s relevance can only strengthen.