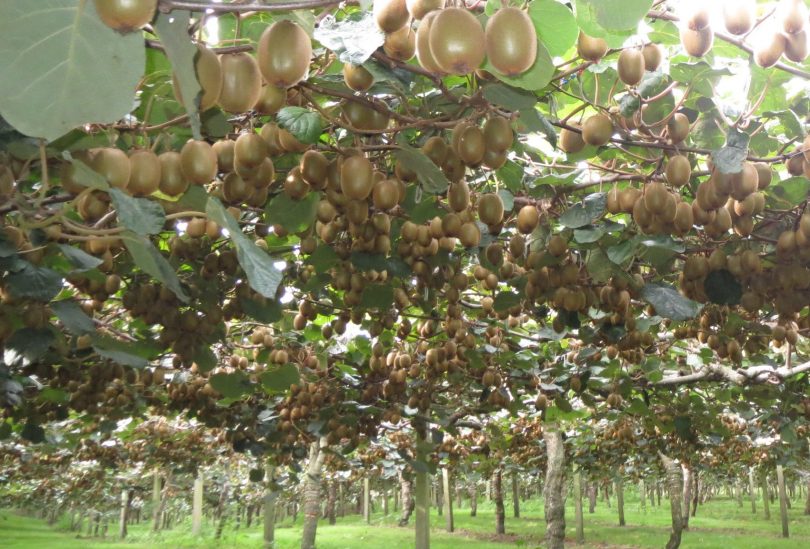 The arrival of just over 2,000 Pacific workers to New Zealand during the 2020-21 financial year (1 July to 30 June) was the smallest recruitment for seasonal, horticultural work under the Recognised Seasonal Employer (RSE) scheme since its introduction in 2007 (Figure 1).

Following the closure of New Zealand’s border late in March 2020 in response to COVID-19, only a small number of border exceptions have been granted to allow the re-entry of skilled and critical workers into the country. This has included two border exceptions for Pacific RSE workers to fill horticulture and viticulture jobs for peak harvest and pruning periods (see here and here for a review of the border exception arrangements).

Fiji, Samoa and Vanuatu participated in the first border exception, with a total of 2,011 workers recruited between January and April 2021. As with RSE recruitment in pre-COVID-19 seasons, Vanuatu provided the majority of arrivals (58%). Workers from Samoa were the second largest group (38.5%), with a much smaller share (3.5%) from Fiji. The majority of arrivals were men – only 45 (2.2%) of the 2,011 workers were women – and workers were distributed nationwide in accordance with regional seasonal labour requirements.

Under the first border exception, only experienced RSE workers could be recruited. An interesting feature of the 2,011 arrivals was the numbers who had been employed in the previous 2019-20 year. These workers were in New Zealand when the border closed in March 2020, returned home sometime after June 2020 when repatriation flights commenced, and were then re-recruited under the first border exception in early 2021. This was especially the case for Samoan arrivals; 76% of the 775 Samoan recruits were employed in 2019-20. Just under half (49.6%) of the 1,166 ni-Vanuatu workers were also working in the previous season. It was only the employers of Fijian RSE workers who provided more opportunities to experienced RSE workers who had not worked the season before. Of the 70 Fijian workers recruited, under a quarter (23%) were employed in 2019-20.

A second border exception, announced in May 2021, allowed for the entry of an additional 2,400 RSE workers – this time both experienced and new recruits – before March 2022. Samoa and Vanuatu were again participants. Solomon Islands was also included; Fiji was exempt due to a community outbreak of COVID-19 and cessation of international air travel to/from the country in April. Between July and August, 447 RSE workers arrived for winter work; all came from Vanuatu and 97% were men. A single flight from Solomon Islands, which arrived in early November with 148 RSE workers, is the final one under the border exceptions.

In August 2021 a new arrangement was announced: one-way quarantine-free travel (QFT) for RSE workers from Samoa, Tonga and Vanuatu. This has subsequently replaced the border exceptions. QFT was immediately welcomed by industry leaders, not only as a critical step towards increasing RSE numbers, but because QFT removes the prohibitive costs for the majority of RSE employers of putting workers through two weeks’ quarantine in government-run MIQ (managed isolation and quarantine). QFT makes it feasible for smaller RSE employers to again recruit from the Pacific.

By mid-November, a total of 590 workers had arrived under QFT, with 49% (290) from Vanuatu and the remaining 51% equally shared between Samoa (150) and Tonga (150). The initial QFT arrangements required RSE workers to self-isolate in approved RSE accommodation and to observe stringent COVID-19 health and safety protocols in accordance with public health requirements. From 8 November, full one-way QFT was implemented. Self-isolation requirements have been removed; RSE workers can now enter the country without undertaking COVID-19 testing, and begin work straight away. All RSE arrivals are required to have had at least one dose of a COVID-19 vaccine prior to entry.

The distribution of QFT workers among RSE employers is being led by industry in close consultation with government. The allocation model is based on approved 2019-20 RSE arrivals by month for individual RSE employers (minus numbers of RSE workers already in their employment). These individual numbers are set within wider regional allocations, and total RSE numbers for the 2021-22 year (1 July to 30 June) must fall under the annual RSE cap of 14,400 places.

As Figure 2 shows, there is a peak in demand for RSE labour for spring work in October and November, followed by a quieter period over Christmas. Demand spikes again in February, for the apple harvest and the upcoming kiwifruit harvest. In May, another influx occurs for winter pruning of grapes and kiwifruit. 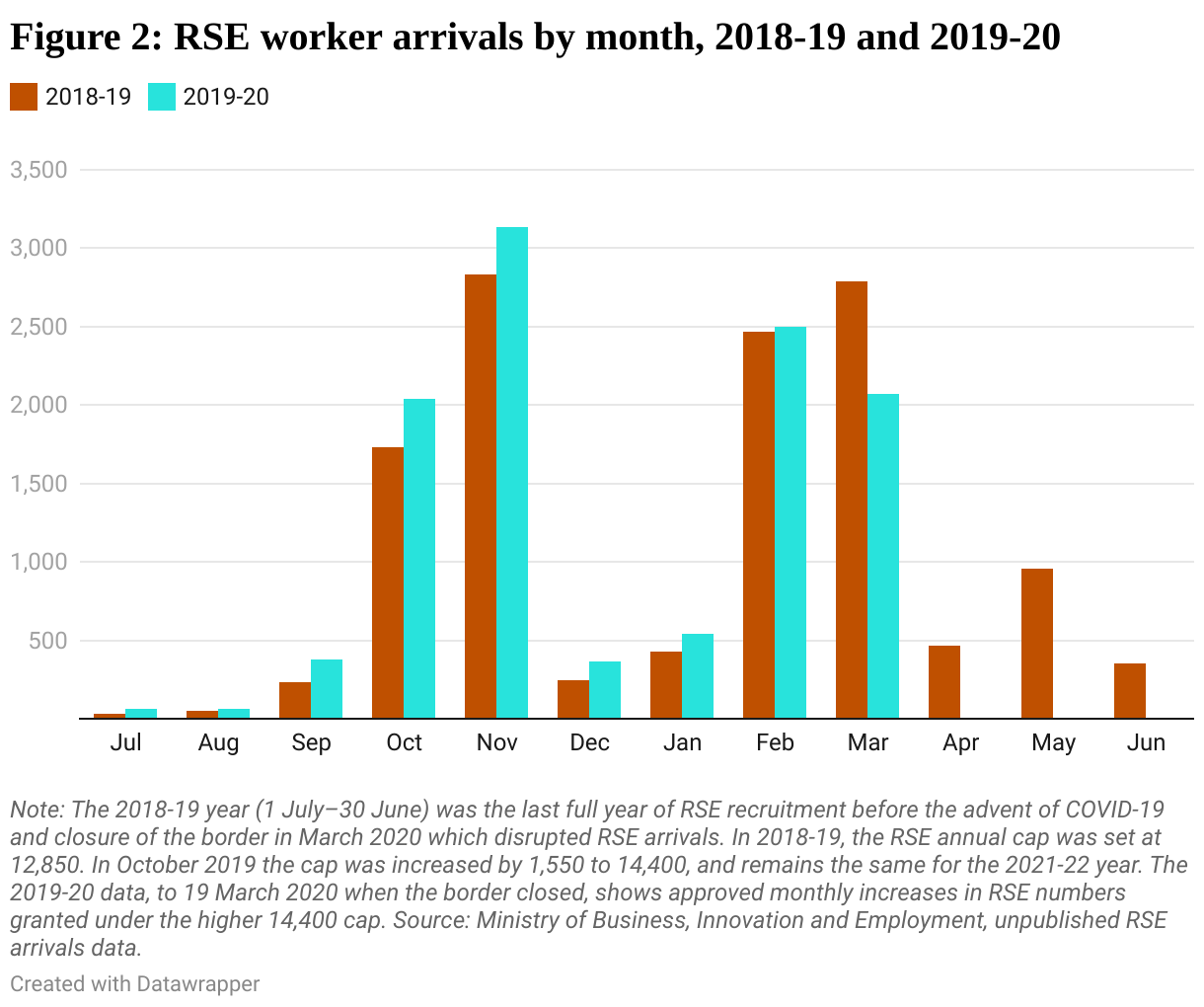 During 2021, getting the systems and processes in place to restart the flow of Pacific RSE labour into New Zealand has been a priority. Industry–government collaboration has always been an integral part of the scheme’s operation. During COVID-19, this relationship has further strengthened, with fortnightly meetings between the Minister of Immigration and industry leaders to discuss RSE arrangements.

With QFT now in place, MIQ requirements (and the associated costs) removed, and sufficient frequency of QFT flights to provide a reasonably steady flow of arrivals, inflows of RSE labour will increase.

Whether they return to ‘business as usual’, however, is a different matter. Two serious challenges stand in the way.

First, to be eligible for new or ‘fresh’ (returnee) RSE QFT recruits, employers must first repatriate long-term RSE workers from QFT countries who entered New Zealand prior to 19 March 2020 and still remain onshore. As I show in a companion blog, this is a difficult task, and it means that recruitment is not only for new workers but to replace existing ones.

Second, QFT countries are also supplying Pacific labour to Australia, and there is high demand; the Australian Prime Minister has committed to at least 25,000 Pacific workers in the country by March 2022. Pacific Labour Sending Units are under significant pressure to mobilise workers to both countries in short timeframes.

Given these constraints, it is difficult to see RSE numbers reaching the annual cap of 14,400 for 2021-22. Labour shortages are likely to persist, especially in light of low regional domestic unemployment and limited sources of other seasonal labour such as backpackers. Kiwifruit industry leaders are, for instance, predicting an estimated shortfall of 6,500 seasonal workers for the kiwifruit harvest in 2022. As COVID-19-related travel restrictions continue, repatriating QFT workers and re-establishing regular two-way flows of RSE labour remain significant hurdles to overcome.