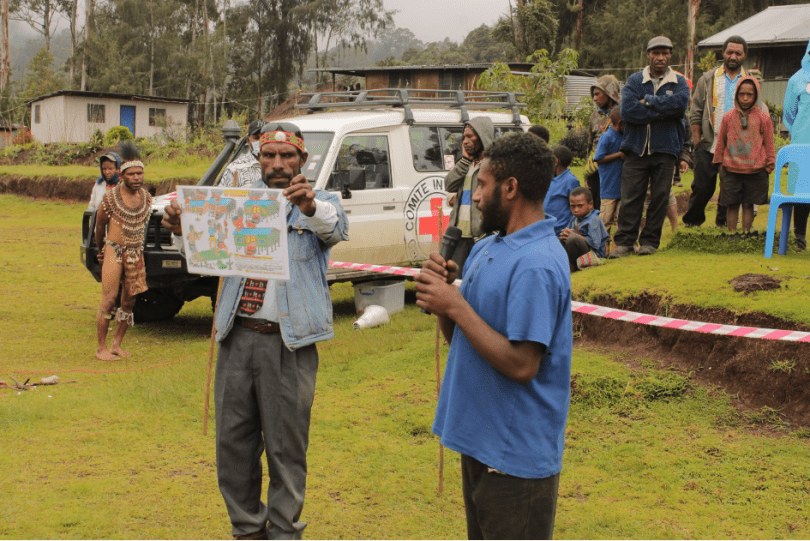 Kennedy Makande is a grade eight student at Kepalam Primary School in the Highlands of Papua New Guinea. He is soft spoken and down to earth, one of those kids who loves telling a story through drawing. In fact, he is one of the most talented visual art students at his school, particularly when it comes to drawing pictures using only one’s imagination. Last year, the International Committee of the Red Cross (ICRC) started a drawing competition with the school. The project engaged students to draw pictures showing the consequences of tribal fighting in the Highlands, and how they want schools to be protected from tribal fights. The best drawings were turned into paintings on the classroom wall by an artist.

Coming from the local community, Kennedy is familiar with the causes of tribal fights – and their consequences for individuals, communities, properties and livelihoods. He even knows the basic rules used by his forefathers about engaging in tribal fights, which he said have changed drastically over the years into a more brutal and chaotic form.

“When I started to learn and differentiate between good and bad, the first thing I was informed about was the reason why our fathers fight,” Kennedy said. “I was given different myths and stories as to why it’s important to protect the land, women and pigs we have in the family and community,” he explained.

He recalled being informed of the importance of carrying a bush knife when walking around to protect himself from enemy attacks.

All those myths and stories of tribal fighting flooded back into Kennedy’s mind when he was introduced to Kepalam’s art competition, with its focus on pictures that explore the fallout from tribal fights, and how students want their schools to be protected. Known for his artistic talent, fellow students put the ideas together with Kennedy taking a leading role in designing and turning all that discussion into pictures.

In the end, Kennedy’s class emerged as the winners of the drawing competition, following the final evaluation and selection. His drawing, capturing the overarching message that schools, students and teachers should not be the target of tribal fights, was turned into a large mural, painted on the side of one of the school building. Representing his class during the inauguration ceremony for the new mural, Kennedy explained the ideas behind the drawings to community members and students alike.

“I have seen and felt the pain of losing access to classroom and teachers. For four to five years we could not go to school because of tribal fighting. Instead of books, children saw guns and bush knives.” said Kennedy.

“The drawings reflect the challenges we have gone through and what it means to protect and look after schools and health facilities.  They give a clear picture to communities and parents that the future of children and their education are very important, and this future depends greatly on the school.  Such services should be looked after,” he said.

He explains that the drawings were not just there to decorate the classrooms but to show the community and students that the consequences of tribal fighting are real, immense, and should not be ignored.

“We have learnt a lot from the competition,” Kennedy said. “It has triggered our minds to advocate on the consequences of tribal fighting, how we can minimise it. It gives us the courage to tell our parents that tribal fights have some massive consequences and one of them is us missing out on education in the past few years because of closure of the school. Our future is important, and the drawings show clearly that we should look after services such as schools.” 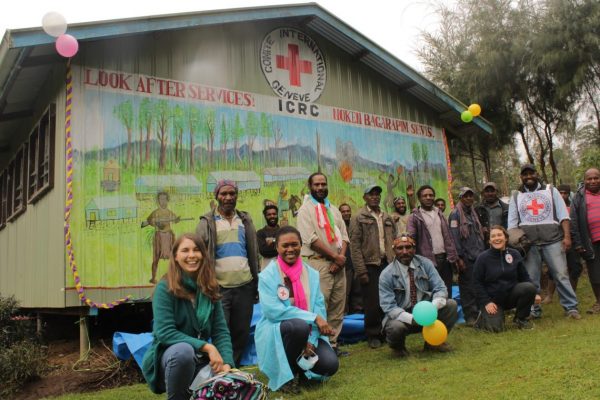 Village leaders, teachers and ICRC staff after the cutting the ribbon to officially inaugurate the mural.

The school’s head teacher Michael Mark said the competitions had allowed students to uncover their natural talents in sketching and illustrations, further driving them to talk about and be involved in visual storytelling.

“This project has greatly helped and changed their mindset and has encouraged them to talk about protection of schools,” he said. “It is more than just a competition, participation and winning prizes; it plays a major role in uncovering and nurturing students to talk, write and draw pictures showing consequences of tribal fighting. They even use the platform to display their creative and artistic abilities, which indirectly influence their growth from children and teenagers and will definitely have a life-changing effect”.

Head of the ICRC’s Mount Hagen office Stephanie Probst explained that all too often ICRC teams witnessed schools being caught up in tribal fights. In response, the ICRC initiated the Kepalam painting project in 2018 with an aim of increasing awareness on the importance of access to education and protecting schools during tribal fights. “We decided to work together with the primary school to find a way to spread this message to the community,” she said. “The project also aims at sparking debate in the community on issues related to rules of engagement during tribal fights and the consequences of lack of education on community in the long term.”

Reuben Tabel is a Communications Officer with the International Committee of the Red Cross based in Mount Hagen, Papua New Guinea.