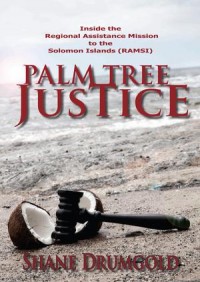 This book provides a very particular and personal view from inside Operation Helpem Fren, otherwise known as the Regional Assistance Mission to Solomon Islands, or RAMSI. This Australian-led mission has been part of the landscape of Solomon Islands since 2003, so Drumgold’s book is very much a snapshot of a particular time (January 2006 to February 2007). After the initial mission to restore peace, RAMSI scaled back its military input and moved to utilising civilian expertise (mostly Australian) to rebuild the legal sector and other elements of the machinery of government. Drumgold’s account raises more questions than it answers and is open to challenge on numerous fronts, but it is a compelling read for anyone who cares about law, justice, Pacific development and the points where these converge and/or clash.

Shane Drumgold was in Solomon Islands from January 2006 to early February 2007 as part of Phase II of RAMSI. He was one of a number of Australian law and justice professionals working in various parts of the sector (including policing, public law offices and correctional services) following: “a statebuilding agenda underpinned by a security guarantee, concentrating on public finance and economic policy, law and justice, accountability, and policing” (Partnering for Peace, p. 30).

While his narrative highlights a number of dualities, perhaps the most striking is between Drumgold’s emotional responses to his professional and personal circumstances and his struggle to maintain the detachment required to work effectively in the legal sector.

In terms of his personal story, the most dramatic part of Palm Tree Justice is his account of the riots of April 2006, the fear he felt for himself and his family, their dramatic departure from the country and the subsequent emotional fallout. Drumgold returned to Solomon Islands alone to complete his contract, and the remainder of this book is devoted to a description of his work as a public defender.

Drumgold documents a number of cases in which he found – or, more accurately, brought– himself into conflict with other RAMSI actors in the criminal justice system. Conflict arose over human rights issues such as the use of handcuffs in courtrooms, conditions and treatment of inmates in Rove prison and the non-observance of legislated amnesty provisions for those involved in the conflict that necessitated RAMSI in the first place.

He portrays himself as something of a lone crusader, employing forensic and advocacy skills in a never-ending quest to uphold the rule of law and principles of justice in a challenging and often hostile environment. He experienced some successes, although they mostly arose from bringing issues to light in a public forum rather than because of landmark legal decisions: “Anything I was going to achieve was going to be by the process rather than the outcome” (p. 84).

But his approach was, in his view, not widely shared:

The role of RAMSI was not only to provide police and trial lawyers it was to develop and strengthen the entire system of justice. Exactly what this meant was very subjective and I soon realised that I clearly had a view different to most (p. 75).

It is not surprising (although Drumgold claims to have found it so) to learn that his courtroom crusading did not endear him to other members of the RAMSI contingent. At the conclusion of the case of John Ross and others v the Attorney General, in which he cross-examined the Australian commandant of Rove prison for an entire day, he notes that:

I was acutely aware that I had not made friends among my RAMSI colleagues. Since the riots and my separation from my family, however, I felt that I no longer wanted to be in the Solomons and longed to go home. Being in a place you really do not want to be has the advantage that being kicked out of it is not the worse thing in the world, far from it, but I was not prepared for the social ostracism that followed the case. I found myself on my own at most RAMSI social gatherings (p. 95).

Although Drumgold claims to have made some meaningful attempts to appreciate  – both personally and professionally – the social and cultural environment in which he was operating (and there is no reason to suppose he did not), it is evident that his success in this area was limited. The brevity of his stay in Solomon Islands is a contributing factor to this and he acknowledges in several places that such a complex environment remained largely a mystery to him just as it did to other RAMSI personnel.

The criminal justice system bequeathed to the Solomon Islands by the former colonial administration is, by its very nature, adversarial. Drumgold himself is a former prosecutor, and his work as a defence lawyer led to inner conflict as well. But there are other dualities or pluralities which are much more striking in the context of  RAMSI’s impact on Solomon Islands. One is the pluralist nature of Solomon Islands law, an often uncomfortable mix of legislation, Anglo-Welsh common law, domestic case law and customary law and practice which can be observed in other Pacific island countries.  Drumgold highlights the clash between custom and law, describing a case that was a resurrection of events that had taken place during 2001, at the height of the ethnic tensions. Steven Mark Moru v. R. (a murder case) was eventually discontinued by virtue of nolle prosequi (an election by the prosecution to discontinue the present case but retain the right to recommence proceedings at a later date), after a key prosecution witness failed to appear. Whilst this came as a surprise to Drumgold, it really should not because his client had already given him an indication:

Things work strangely in the Solomons. I went to the cells in the High Court in the morning of the trial to give Moru my usual speech about how things would progress during the trial. He told me that Hura would not be coming to give evidence. I was taken aback, “How do you know that?” “Because compensation has been paid” he answered as though he misunderstood my question, “and the matter is finished”… I told him that I should still run through the trial with him in case he was wrong. In a wise and slightly patronising way, he put his hand on my shoulder and said “No worry bro, hem true.”

Most significant, though, is the fundamental failure to align RAMSI’s ‘Australian’ approach with the realities of life in Solomon Islands – a culturally distinct Pacific island country in a post-conflict phase. Drumgold laments the narrow vision of ‘the key RAMSI players’:

Most seemed content simply to impose the values, views and prejudices of white middle-class Australia upon the actions of a third-world people, a people experiencing the growing pains that all new nations experience at the same stage of development (pp. 291/292).

The most puzzling omission from this account is the political backdrop at the time of Drumgold’s tenure in Solomon Islands.  The author makes reference to heightened tensions between the Howard government of Australia and Manasseh Sogavare’s government in Solomon Islands, but at no point does he specify that the crux of this conflict was Sogavare’s strongly-voiced opposition to the extradition of Julian Moti, whom he had appointed as Attorney-General, the most senior law officer in the country. It is surprising that this issue does not even rate a mention in a book that is so embedded in the legal system and its practices at the time.

Drumgold admits freely that with his family back in Australia he focused almost exclusively on his work. His desire to simply finish his contract and leave certainly seems to have fueled an approach that could be deemed robust, crusading or maverick, depending on where the commentator is standing. Drumgold wears his heart on his sleeve and it is open to question as to whether that is necessarily a good thing for a law officer. Nonetheless, no matter what the assessment of Drumgold’s personality might be, there is no denying that he has exposed some serious questions about the impact of the RAMSI mission on the overall state of law and justice in Solomon Islands at that time and subsequently.

This was originally posted on the Pacific Institute of Public Policy‘s blog here.

Tess Newton Cain is the Director of Operations at the Pacific Institute of Public Policy and a Research Associate at the Development Policy Centre.