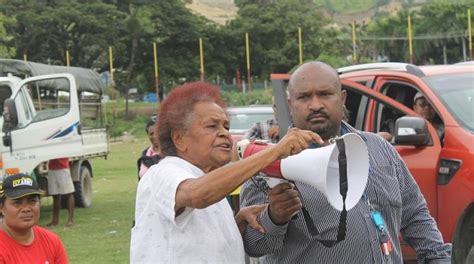 PNG is mainly a patriarchal society, where men are in charge of everything from the home to community decision-making, while women are seen as possessions of men, like a pig or land, and are expected to be obedient and accept every decision made by men. In the villages, the male folk build houses and fences, while women make grass skirts and nets. In towns, women take care of home duties and childcare while men are at work.

In spite of these traditional cultural norms, PNG women are going places. They are now flying planes. There are more women teachers and principals, and more women in the public service.

However, in politics, there has been no progress in improving the representation of women. PNG has had only seven female MPs since independence, and it has none now.

The first three elections were held under the Australian administration in 1964, 1968 and in 1972; Josephine Abaijah was the only women candidate who won a seat (the Central Provincial seat).

In 1982, only Nahau Rooney won (Manus Open). The other 5 female candidates lost.

In 1992, 9 women ran for the general elections, but again none won.

1997 saw a huge increase in the number of female candidates up to 38, and there were two victors: Dame Josephine Abaijah (Milne Bay Provincial) and Dame Carol Kidu (Moresby South Open).

In 2002, there was a further increase in the number of female candidates up to 47, but only one victor: Dame Carol Kidu.

The recent 2017 elections resulted in another massive increase in the number of women candidates up to 193, but not one of them won a seat.

It is not good enough that we have so many more female candidates. What matters is the number of female MPs. Currently, PNG is only one of five countries that have no female MPs. The global average share of female MPs is 23 percent. This is not just a national issue, but a global concern.

Why are women not more successful? It is not easy for PNG women to run for public office. According to Rufina Peter, the highest polling woman candidate in 2017 election, one of the challenges facing women candidates in PNG is the perception among many citizens that politics is a men’s world and that all women are ill-equipped to be effective political leaders. This reflects the patriarchal culture they are raised in which teaches that leadership is for men and not something that women and girls can exercise.

Corrupt political practice is another challenge. Candidates commonly attempt to buy votes using money and gifts. In the 2012 and 2017 elections, there were widespread reports of bribery and fraud involving candidates, citizens and electoral officials. Research in relation to the Bougainville 2015 elections found a perception that women are more likely to engage in “clean campaigning”, that is, not getting involved in money politics or gift-giving. This might be admirable, but when male candidates participate in money politics, it can simply result in female candidates getting fewer votes.

Given the lack of progress made by women in politics, and the structural factors holding them back, a holistic approach has to be taken to advance gender equality in politics. An earlier proposal to reserve 22 seats for women in the national parliament (one seat per province plus one for the National Capital District) came close to being accepted in 2012, and needs to be revived. It will take time to change PNG’s patriarchal culture, and clean up elections, and we can’t afford to wait.

Loretta Dilu is a tutor in the Strategic Management Division of the School of Business & Public Policy, University of Papua New Guinea