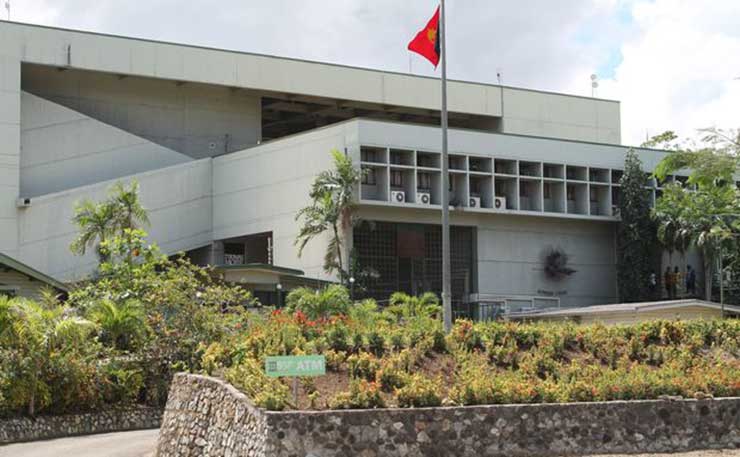 “Government is not shaking, no, I already planted the post to hold it up, so you come and remove it”, Prime Minister Peter O’Neill.

On 7 May 2019, the much-anticipated motion of no confidence against Prime Minister Peter O’Neill was lodged in Parliament in accordance with Parliamentary Standing Orders. But in a move typical of governments in PNG desperate to stay in power, and to avoid the no confidence vote, the government used its numbers for the second time to adjourn Parliament, to 28 May 2019. It is a deliberate tactic and may be used again to prevent a no confidence vote.

In the last week, the government – which had 81 MPs – saw its number whittle to 59 when several ministers, governors and members of parliament (MPs) crossed over to join the Opposition, dramatically increasing its numbers from 24 to 50. The ‘posts’ the Prime Minister had planted to keep the government from shaking were struggling to stay firm.

Certainly, the constitutional and parliamentary ‘posts’ which helped his government to stay in power in the 9th Parliament are absent in the current Parliament. These ‘posts’ were: the 30-month grace period where a vote of no confidence vote was not permitted; the period of notification required for a motion of no confidence to be tabled, which increased from one week to one month; the number of MPs required to endorse the motion of no confidence, which increased from 11 Members of Parliament (MPs) to 22 MPs; and the reduction of the number of days Parliament is seated. These were declared illegal and unconstitutional by the courts in September 2015. As these ‘posts’ have been removed, the survival of the current Prime Minister depends on his ability keep his numbers (which have been seriously threatened) intact. The Prime Minister showed that he had the numbers on 7 May 2019.

The Prime Minister has built and nurtured the People’s National Congress (PNC) party for 20 years, and the party has governed Papua New Guinea without interruption since 2012. If the PNC is a ‘post’, the recent exodus of discontented MPs suggests that the government is on shaky ground and needs the support of the coalition partners, led by formidable leaders like Paias Wingti and Sir Julius Chan. The prime target of the no confidence motion is Peter O’Neill, it is about replacing him as Prime Minister.

Adjourning Parliament to avoid a no confidence motion

In February 2019, the Minister of Finance and Leader of Government Business, James Marape (who has since resigned), successfully introduced a motion to adjourn Parliament to May 2019. The 18-month grace period that prevented motions of no confidence in the Prime Minister had expired on 5 February. This adjournment of Parliament pushed back the plans of the Opposition to unseat the Prime Minister in a no confidence vote.

A number of parties, led by the National Alliance and the Pangu Pati unsuccessfully tried to unseat the PNC in the 2017 national elections. A chief proponent and then-Leader of the Pangu Pati, Sam Basil, later surprised everyone by joining the government in October 2017. He was amongst a number of MPs that defected from the Opposition to join the government. In exchange for bringing 14 Pangu Pati MPs and boosting the size of the government, he was appointed Minister for Communications and Information Technology. Francis Maneke, a PNC member who held this post for only two months, had to make way for Basil. Maneke would later abandon O’Neill to join the Opposition.

In a bid to complicate proceedings for a no confidence motion from being tabled, the then-Attorney General, Steven Davis, filed a reference in 2018 seeking the Supreme Court’s interpretation on the procedures of the no confidence vote against the Prime Minister. Like James Marape, Davis would later resign and join the Opposition. It is not uncommon to have a court action such as the one by Davis, and the Supreme Court reference – which consists of 15 questions – is yet to be responded to.

In what appears to be a game of tit-for-tat, the Opposition also filed a Supreme Court reference in February 2019 regarding the legality of the election of Peter O’Neill as Prime Minister under Section 63 of the OLIPPAC. The Supreme Court’s interpretation was sought firstly regarding whether it was constitutional to allow the Governor General to invite the leading political party to elect a prime minister; and secondly, whether it was legal and constitutional that he was elected at the first sitting of Parliament after the election and not on the second day as required by the Constitution. This reference was described by the lawyer for the Prime Minister as “contrived and a publicity stunt, spurious and vexatious”, given that the Supreme Court had found this section of OLIPPAC to be valid and constitutional in July 2010.

MPs defecting from Opposition and Government

In the months after the election, a steady stream of Opposition MPs defected over to join the government, motivated by access to government-controlled state resources. Being in Opposition usually prevents access to funds for electoral development projects, which can often jeopardise chances of re-election. One MP, however, crossed from the government side to the Opposition. The MP was Peter Numu, Governor of the Eastern Highlands. Eight MPs from the province pledged their loyalty to O’Neill.

But the move that was unparalleled in its magnitude was the sudden resignation of James Marape, Minister of Finance and Leader of Government Business, on 11 April 2019. His departure opened the gate for other government MPs to exit. Working relations between the Prime Minister and the Finance Minister had deteriorated to the point where the latter felt he was not trusted and his advice was ignored, and he resigned without discussing it with the Prime Minister.

In a move to shore up numbers in government, the Prime Minister promoted Sam Basil to the Finance portfolio, while Basil’s Communications and Information Technology portfolio went to Koni Iguan, another Pangu Pati member and MP for Markham.

O’Neill handed the role of Leader of Government Business to Douglas Tomuriesa, Minister for Forests. Despite the departure of a senior government minister and a PNC member, O’Neill sought to dispel political fissures by saying, “my government is very stable …”. With 46 PNC MPs in government, O’Neill dismissed Marape’s resignation as not threatening the strength and stability of the party, confident that his government would not be ousted in a no confidence vote.

Two weeks later when another senior Minister, the Minister for Justice and Attorney General, Davis Steven, resigned, O’Neill again maintained that his government was intact. Like Marape, Davis remained with the government but relinquished the ministerial responsibilities to spend more time on his electorate. Unlike Marape, who had not confided in O’Neill, Davis was said to have indicated his intention to step down to the Prime Minister. Alfred Manase, then-Minister for Civil Aviation, assumed this vacant portfolio.

Meanwhile, Sam Basil tried and failed to launch his own political party and instead, along with other Pangu MPs, opted to join the Melanesian Alliance. Some Pangu MPs joined the Opposition. Amid these developments, the Opposition intensified its campaign to lure MPs from the Government to join its ranks when Parliament convened on 7 May 2019. O’Neill defiantly contended that the Opposition did not have the numbers  – it had 24 MPs and needed 32 more MPs to oust him – saying confidently, “We will see on the floor”.

O’Neill’s claims of his government being intact further unraveled when five senior MPs resigned from the PNC. The five MPs were Sir Peter Ipatas (Governor of Enga), Davis Steven (former Minister of Justice and Attorney General), William Powi (Governor of the Southern Highlands), Philip Undialu (Governor of Hela) and Magarima Manasseh Makiba (MP for Komo). Undialu said he had lost trust and confidence in O’Neill, the same sentiments expressed by Marape. However, Powi was more blunt, saying that, “it was time for a change” (in government). Although Sir Peter Ipatas said his decision was not intended to destabilise the government, the illusion of government stability was quickly evaporating.

When three more PNC MPs (the Governors of Manus and Saundaun, and the MP for Okapa) resigned, Marape, who wanted to prevent others from resigning, called on the Prime Minister to put the leadership of the party to a vote. Marape, along with other PNC members who resigned, was then expelled and prevented from attending the PNC caucus. The Governor of Saundaun, however, denied resigning from the government. Unfazed by the departure of PNC and PNC-aligned MPs, and claiming the support of 38 PNC MPs, the Prime Minister allegedly refused to entertain the idea of a leadership change and confidently talked about celebrating his leadership of the party for 20 years, and as Prime Minister for ten years, at the party’s convention in 2021. At that point in time, the ruling coalition claimed to have 81 MPs.

Opponents of the government are bunkered down in three camps: one, led by James Marape, is based in Laguna Hotel near Parliament House; another, led by Sir Peter Ipatas, are holding out at 17 Mile, outside Port Moresby; and the original Opposition members are holed in at the New Sanctuary Hotel in Port Moresby, also near the Parliament building. Government MPs were camped at the Crown Hotel in Port Moresby. MPs will remain in camps until 28 May.

With the exodus of government MPs, Opposition MPs from different provinces urged their government counterparts to abandon the PNC-led government. In the Pangu Pati strong-hold of Morobe Province, Sam Basil was called on by leaders from Morobe to indicate whether the party was for or against the government. In accepting the Finance portfolio, Basil committed to loyally serve O’Neill. He reaffirmed this commitment in the Nawaeb District in Morobe Province, where the Prime Minister opened a dormitory for the Lutheran High School. He also apologised for waging a campaign against the Prime Minister during his time as Opposition Leader and during the 2017 general election, saying that “the people have given you the mandate to govern at the election, and we cannot deny or take that away from you and PNC”. Basil seemed to think that O’Neill had earned an uncontested mandate to rule as Prime Minister until the 2022 election, but this disregards the constitutional provision that allows for governments to be changed between elections.

James Donald (North Fly) and Sekie Agisa (South Fly), Opposition MPs from the Western Province, called on Governor Taboi Awi and Minister for Correctional Services and MP for Middle Fly, Roy Biyama, to join the Opposition. On 3 May, the Governor of Western Province, along with nine other government MPs, including three senior PNC members (Sir Puka Temu – Minister of Health, Douglas Tomuriesa – Minister for Forests and recently-appointed Leader of Government Business, and Solan Mirism – Minister of Defence) joined Marape’s camp at Laguna Hotel. Tomureisa later retracted to rejoin the government.

At the time of writing, with Parliament adjourned for three weeks, both Opposition and Government will be entangled in a relentless battle to poach MPs from the other side and protect their numbers. The lobbying for numbers is now intensifying. For Prime Minister Peter O’Neill, although his government has been shaken, he has thwarted a no confidence motion – albeit momentarily. With the season for no confidence votes open since 5 February 2019, the Opposition will pursue its mission to oust the Prime Minister. If this is successful, it will be in keeping with PNG’s history, in which no Prime Minister has yet survived a full second term in government.

This blog represents entirely the views of the author.