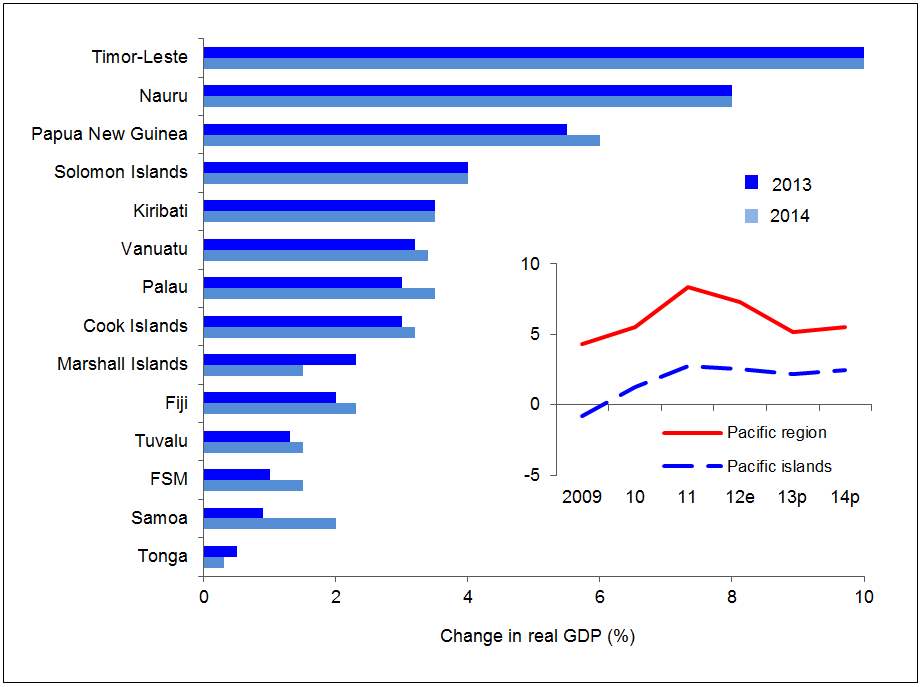 In the latest issue of the Pacific Economic Monitor, released yesterday (March 26), the ADB forecasts that the average rate of growth in its 14 developing member countries in the Pacific region will fall to 5.2%, as earlier gains from major foreign investments and public infrastructure projects fade. The performance of the region’s larger natural resource exporting economies (Papua New Guinea (PNG) and Timor-Leste) continues to drive the economic outlook, with these two economies comprising about two-thirds of the weight in the regional growth average.

In PNG, growth is projected to slow to 5.5% in 2013—from 9.2% in 2012. Most importantly, construction work on the $19 billion liquefied natural gas (LNG) project will shortly peak, with declines in construction and transport activity expected over the coming 18 months. Lower activity in these sectors is expected to spillover to other sectors, such as retail and wholesale trade. Falling prices of key agricultural exports and a strong kina are also expected to reduce rural incomes. To counter the effects of a slowing—albeit still strong—economy, PNG authorities plan to undertake a period of expansionary fiscal policy. The 2013 Budget will target a 27% increase in expenditure and a budget deficit of 7.2% of GDP in 2013, moderating to a deficit of 5.9% in 2014. Even with these increases, public debt is expected to remain low by historical standards—peaking at around 35% of GDP in 2014.

Timor-Leste’s economy is expected to continue to be the fastest growing in the region, with non-petroleum growth of 10.0%, down slightly from 10.6% in 2012. Although public expenditures in the 2013 Budget are 8.8% lower than in 2012, the weaknesses in project implementation experienced in previous years, along with expected improvements in 2013, means actual expenditures are likely to increase. The economy will also benefit from modest increases in private investment outside the petroleum sector.

Economic growth in the Pacific islands will be much slower than the resource exporting economies and is expected, on average, to continue to moderate, falling to 2.2% in 2013 (from 2.5% in 2012 and 2.8% in 2011). Across the 12 economies, ADB expects growth slowdowns in seven during 2013.

The largest, Fiji, is expected to suffer from the impact of Cyclone Evan as well as ongoing declines in sugar production, which ADB expects will slow growth to 2.0% in 2013, from 2.5% in 2012. However, if progress continues to be made towards planned elections in 2014, there could be a significant upside risk to this forecast.

Reduced stimulus from completed or nearly completed public construction projects is expected to weigh down growth in Cook Islands, the Federated States of Micronesia, Samoa, and Tonga.  Samoa’s growth this year is also expected to be impaired by the impacts of Cyclone Evan. The Solomon Islands economy will be hurt by ongoing declines in log production. However, at 5.5% in 2012 and 4.0% in 2013, Solomon Islands growth remains relatively strong by regional standards due to rising agricultural production and gold output. Slightly lower growth in 2013 is also expected in Palau’s economy as the country addresses challenges associated with peak-period capacity constraints in its tourism facilities.

In more positive news, five of the Pacific island economies are forecast to grow at higher rates in 2013. The largest of these is Vanuatu, which ADB expects to grow by 3.2% in 2013 (compared with 2.0% in 2012). This higher growth emerges from expected rises in tourist arrivals and the implementation of previously delayed public infrastructure projects. Nauru expects sharply accelerating growth due to increased economic activity associated with the Asylum Seekers Regional Processing Center and despite a modest decline expected in phosphate production. Kiribati, Marshall Islands, and Tuvalu are also expected to grow at higher rates in 2013 due to increased public infrastructure development and strong fishery revenues.

Looking forward to 2014, growth across the Pacific economies is forecast to pick up modestly due mostly to planned increases in public infrastructure investment in the larger economies of PNG, Timor-Leste, Fiji, as well as in several of the smaller economies (e.g., Kiribati, Federated States of Micronesia, Samoa, Tuvalu, and Vanuatu). The tourism outlook for the region also remains bright, with visitor numbers in 2012 building on historic highs set the previous year. Strong arrivals from the main markets of Australia and New Zealand, as well as a rise in numbers from East Asia, are driving the gains.

As growth remains sluggish to moderate across the Pacific region and the broader global economy as well, a worrying trend is the increasing number of countries turning to fiscal stimulus to try to push growth higher. Many countries in the region are planning to increase the size of their budget deficits and public debt in 2013. While debt sustainability indicators suggest low to moderate risks for most countries, higher rates of spending will add to the macroeconomic vulnerability of the region.

Ambitious fiscal expansions in PNG and Fiji stand out in terms of these concerns, if only because of the high rates of expenditure growth being undertaken in each of them. Even Timor-Leste, with its large accumulated reserves, has some worrying signs that the long term sustainability of its national savings may be challenged in coming years due to its ambitious expenditure plans. A number of smaller Pacific countries—that depend largely on public expenditure for their growth—also find themselves in fiscal positions that leave few options for sustaining growth in the face of macroeconomic fluctuations. With these developments, slowing spending growth and rebuilding the fiscal buffers required to withstand future economic shocks seems likely to continue to be a major policy challenge for the region in the years to come.

These trends and developments are discussed at greater length in the Pacific Economic Monitor which can be downloaded for free here.