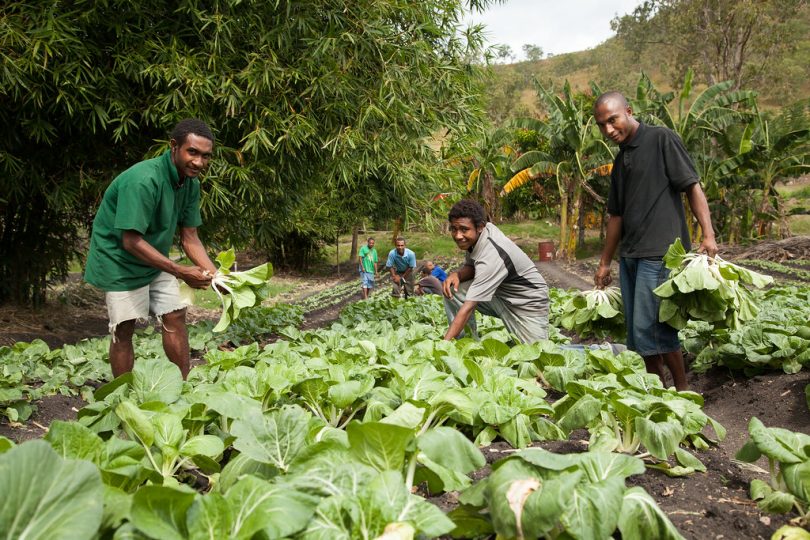 Papua New Guinea (PNG) is often presented as a country with little hunger. The idea of “subsistence affluence” was developed in PNG in the 1970s to elucidate a situation in which people ate what they grew, and grew enough not to be hungry. That idea has persisted. Writing in 2007 on poverty in PNG, Diana Cammack reported the widespread view that in the rural areas of PNG “there is little hunger” (p.21). Some experts support the idea as well. In 2000, leading PNG agricultural expert Mike Bourke wrote that “Food security is generally good in modern PNG. This is because a high proportion of the population is engaged in subsistence agriculture; most people have access to land for food production; there is a diversity of subsistence food sources; and most people have access to cash income with which to buy food when subsistence supplies are inadequate” (p.6).

For a long time, however, the data has suggested that in fact hunger is widespread in PNG. As John Gibson worked out, the 1996 PNG Household Survey showed that “In both the urban and rural sectors, approximately 42 percent of the population are not meeting food energy requirements of 2000 calories per person per day”. The 2009 Household Income and Expenditure Survey produced similar results, as did a more recent survey of four lowland provinces.

Percentage of PNG households with various forms of food insecurity, by residence (2016-2018)

All the answers show little difference between urban and rural areas: hunger is slightly higher in rural areas, but evenly spread across both.

To explore further, we use the most stringent definition of hunger, that provided by the last question, namely that someone went without eating for a whole day. It is surely impossible to not eat for a whole day and not feel hungry. As mentioned, almost one-third of households said that they found themselves in this position at least once in the previous year.

There is certainly considerable variation across PNG. In the figure below we focus on rural PNG – where the great majority of the people live. Hunger is widespread. Even using this strict definition of not eating for a whole day, only three provinces (Madang, Bougainville and Jiwaka) have less than a quarter of their households hungry. Western Province has the most hunger among rural households with half the households hungry. Madang has the lowest with just over 10%.

Percentage of PNG households that went without eating for a whole day, by province (2016-2018) 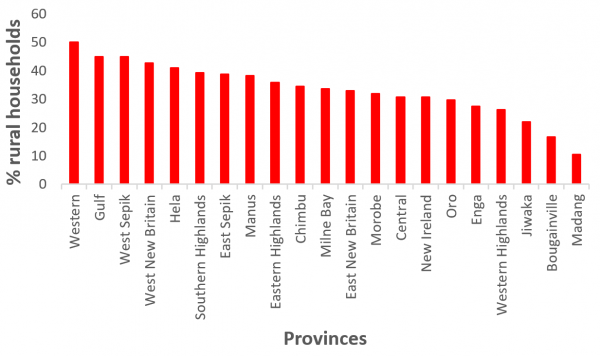 One idea that is popular in explaining poverty in PNG is that it “is significantly located in the most isolated and environmentally disadvantaged parts of rural PNG” (p. 2). There are numerous lists of the most disadvantaged districts in PNG. We use that provided by the 2001 PNG Rural Development Handbook and, following convention, define the bottom 20 as the most disadvantaged. The DHS data is not presented by district, but we know that 9 of its 21 provinces have none of the 20 most disadvantaged districts. Of these, Bougainville, Western Highlands, New Ireland and Oro have below average levels of hunger, but the other five (Eastern Highlands, Manus, East Sepik, West New Britain and Gulf) have above average levels. Gulf is the second hungriest province by this measure.

In summary, hunger in PNG is not confined to urban areas nor to particular disadvantaged or isolated regions. Nor is the country’s nutrition challenge solely about improving the quality of diets, as important as that is. Many people are simply not eating enough. Perhaps subsistence affluence had an empirical basis in the past in PNG, but it certainly lacks one now. The DHS is the latest in a number of surveys to demonstrate that there is widespread hunger across Papua New Guinea.