Images from the 2019 PNG Update

The PNG Update has a long history, but in its current format (held at UPNG and co-hosted by the UPNG School of Business and Public Policy and the ANU Development Policy Centre) it started in 2014. At that initial Update, there was just one female Papua New Guinean presenter. By 2019, there were 23.

Figure 1: Presenters at the PNG Update 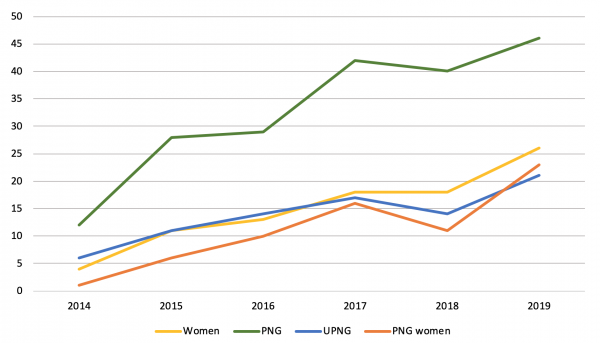 Part of the reason is that the Updates are getting bigger. In 2014, there were only 26 presenters in total; by 2019 that had grown to 77. But the shares of papers presented by women, by PNG nationals, etc is also growing, as the next figure shows.

Figure 2: Presenters at the PNG Update 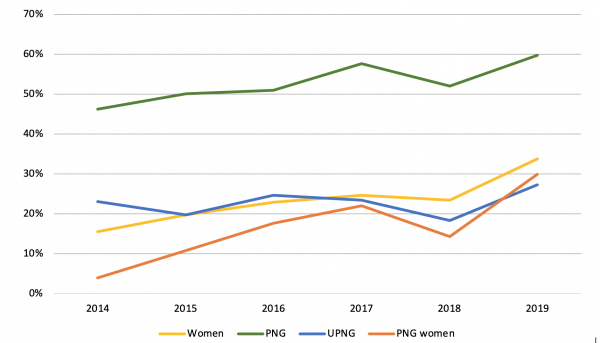 The share of presentations by Papua New Guineans hit the half way mark in 2015 and 2016 and increased to 60% this year. The share of PNG women presenting has gone up from 1 to 30%. UPNG academics have always been strong contributors to the Update, but their share has grown from about 20% to about 30%.

That said, the lack of female Papua New Guinean presenters was apparent in the plenary sessions, in which a clear majority of speakers were male. The exception to this was the ANU-UPNG research showcase, in which four of the six authors whose work was presented were female – though unfortunately only one of those was actually able to attend the Update and present.

Figure 3: Ratio of presenters to authors (both measured as shares) 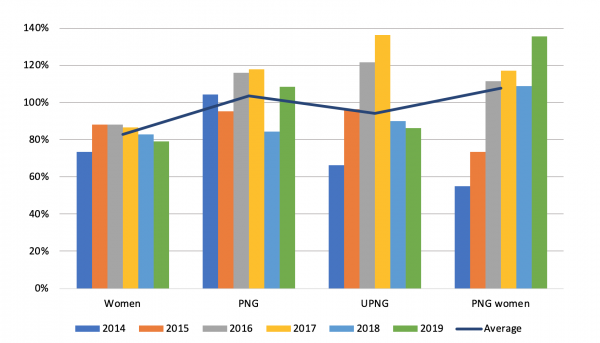 While these ratios move around year to year, we see parity on average for most categories, namely PNG nationals, UPNG academics and PNG women. The even better news is that we see an upward trend in the PNG female category, meaning that more PNG women are taking a leadership role, and standing up to talk. The anomaly is the general female category, where the average of shares of presenters to contributors is stuck at only 80%. This may be because women work in larger teams, which would not be a concern, or it may be because men rather than women tend to get chosen to represent teams of authors, which would be worrying. More research is needed.

Further improvement in all these areas cannot be taken for granted, and will require continued effort from all interested parties. However, these trends are a good sign, and should be monitored carefully over the years to come.