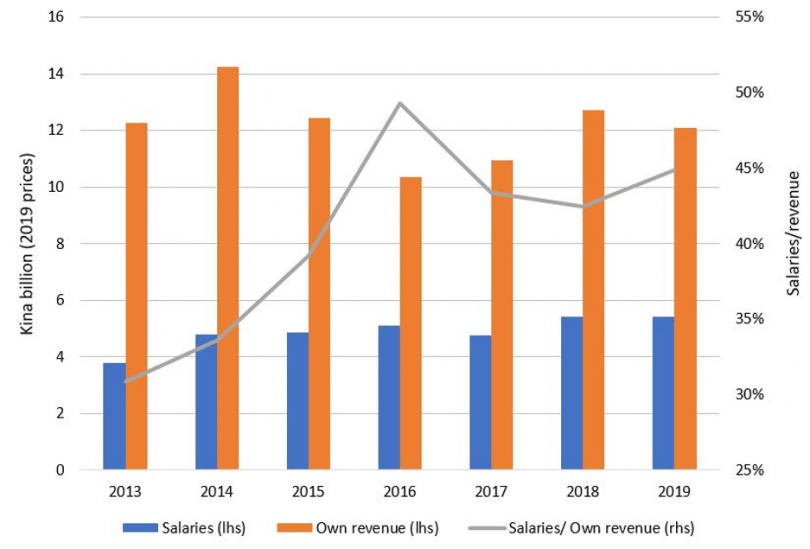 In 2013, PNG’s resource boom ended. Government revenue in 2019 was no greater than it was in 2013, once inflation is taken account of. But, over this same period, the salary bill has grown by 43%, again after inflation. 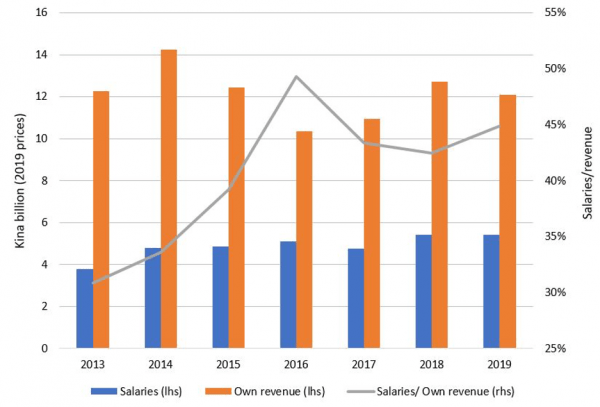 Note: Foreign aid is excluded from revenue as aid can’t usually be used for salaries.

That is a rapid rate of increase in salary payments by any standards (an average of 6% a year – plus inflation). But what is really striking is that this rapid growth came in a period (from 2013 onwards) where there was no increase in real revenue, and when the country was running record deficits, and running up arrears.

Nearly all of the salary bill increase came in two years: 2014 and 2018, when the salary bill grew by 26% and 14% respectively (after inflation). As you can see from the graph above, these were also the two good years for revenue. Perhaps this led to a relaxation on hiring controls, and also gave the opportunity to pay arrears, especially towards superannuation.

Although the 2014 blowout is bigger, the 2018 one is particularly striking because at the end of 2017 the government promised the World Bank through its Medium Term Fiscal Strategy (MTFS) that it would not increase the salary bill at all in the next two years. The PNG government knew it was facing fiscal difficulties, and wanted a loan from the World Bank to help finance its deficit. Promising to keep a tight lid on salaries is quite common in such a context. But the government completely blew that promise. As the graph below shows, far from keeping the salary bill flat in nominal terms, the salary bill exceeded its target by more than 25% in both 2018 and 2019. 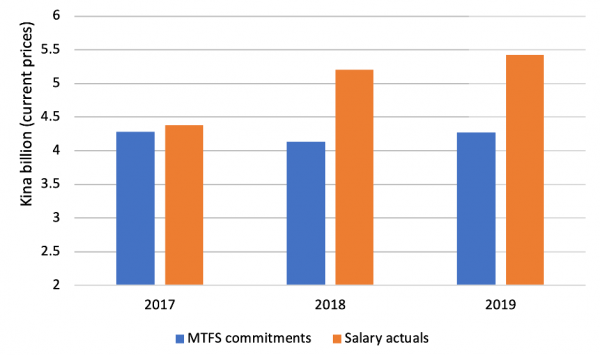 Why this massive discrepancy? Certainly, the O’Neill government specialised in mixed messaging: on the one hand telling the World Bank and other donors that it was serious about reform, on the other denying in public the very need for reform. But, really, who knows? The two massive salary increases in 2014 and 2019 certainly paint a picture of a salary bill that is out of control, and impossible to predict, let alone contain.

PNG needs more teachers and doctors, but who is being hired? The 2019 budget outcomes document provides estimates of the size of the civil service between 2015 and 2019, when the salary bill grew by 11% in real terms. It shows 8% growth in total numbers over this period, and 7% growth in teachers (who make up 56% of the total public service).

Whether or not the additional hiring has been in priority areas, the harsh reality is that if your revenue is not growing, and you are running up arrears and struggling to borrow, you can’t afford an increase in your salary bill.

Rising salaries are one reason PNG has had to borrow more in recent years. Together, PNG’s rising salary and interest bill have reached almost 60% of own revenue, putting the budget under enormous stress. That is a level last seen in the late 1990s and early 2000s, a period of fiscal crisis. All the additional fiscal space provided by the resource boom of the intervening years is gone.

Salaries and interest as a percentage of own revenue 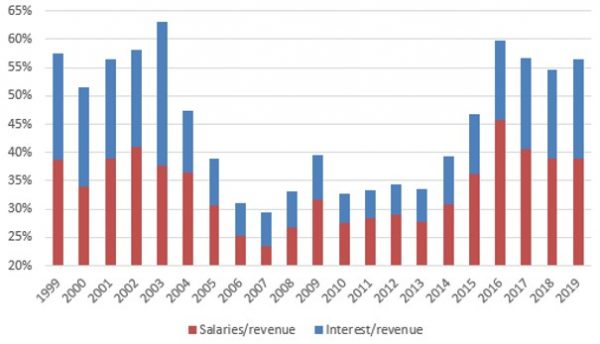 The rising salary and interest bills are the twin fiscal legacies of the O’Neill government. Undoing the damage to service delivery, and re-establishing PNG’s reputation as a responsible fiscal manager would have been a tall order without a once-in-a-century pandemic. The task is now even more difficult.

All data from the PNG Budget Database. The longer time series in the final graph excludes statutory authority salaries.