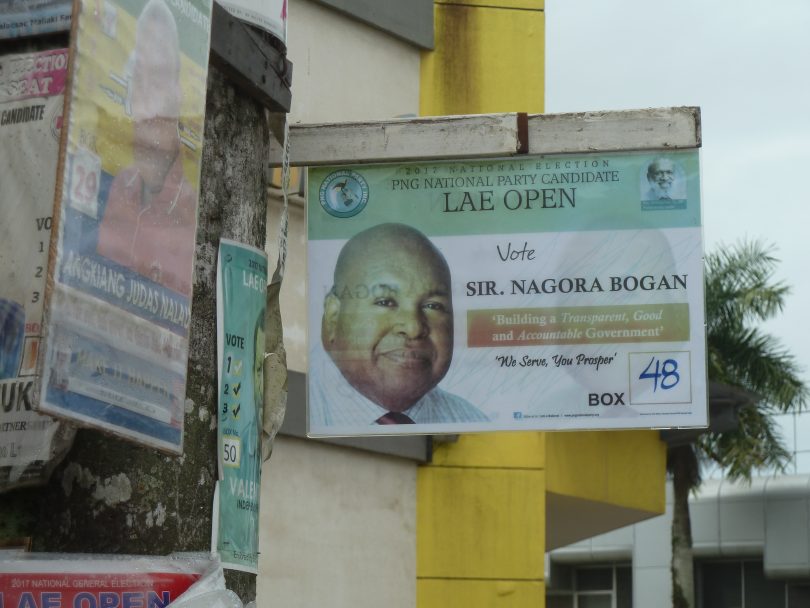 A candidate's poster from the 2017 PNG election (Credit: Terence Wood)

The Western Melanesian countries of Solomon Islands and Papua New Guinea (PNG) are both poor and poorly governed. Anyone who has spent any time in either country will have seen how governance woes contribute to the countries’ poverty. Their governments neglect essential infrastructure. Dysfunctional bureaucracies impede legitimate businesses and let other businesses get away with causing harm. Health and education systems are poorly run.

This much is obvious. What is less well understood is the way the two countries’ politics contribute to their governance woes. In my new Asia & the Pacific Policy Studies paper I explain that many of the governance problems in the two countries stem from their clientelist politics.

In elections in clientelist polities voters don’t vote in search of better public policy, or on the basis of how well the country is being governed. Rather, they vote for candidates they think will help them directly if they win. This has the effect of selecting and incentivising members of parliament (MPs) to focus on delivering direct benefits to their supporters back in their electorates rather than running the national government well.

The effects of this are obvious. In both countries, funds that MPs can spend at their discretion within their electorates have grown at the same time as government departments have been underfunded. In both countries, ministers often pay little attention to the government departments they are supposed to be running. Ministers are rarely punished for poor performance. Bureaucracies are not subject to political pressure to improve; they are neglected and demoralised.

It may sound like I am blaming voters in Solomon Islands and PNG for their countries’ governance woes. I’m not. I think voters who vote in search of personal or localised benefits in the two countries are voting perfectly reasonably. Voters’ decisions are reasonable because the states they live in are weak, while at the same time voters’ needs are acute. Voters need something from elections, and when the government can’t deliver it through better policy and better services, all they can hope for is direct assistance from MPs.

You might ask why voters don’t vote for better governance to solve this problem. It might take longer but it would bring greater benefits in the end. The problem is that individual voters, or families, or communities, or even electorates, don’t control the quality of national governance. At best, all they can do is elect one MP out of many (50 in Solomon Islands and 111 in PNG), and one MP can’t change the country on their own.

We’ve resolved this particular problem in countries like Australia through strong national political parties that translate individual preferences into national action. However, these were formed in a very particular environment associated with the industrial revolution and the rise of national social movements. In the mostly rural, fragmented countries of Solomon Islands and PNG, nothing equivalent exists.

And so we have the clientelism trap. Because Solomon Islands and PNG are poor, underdeveloped countries, people vote for members of parliament who they think will help them directly. This, in turn, creates perverse political incentives and contributes to the continuation of poor governance and poverty.

There are exceptions of course: voters who strive to find candidates who will help the country, and members of parliament who focus on national issues despite the incentives. There are also politicians whose corruption cannot be explained away by political incentives. And there are other problems including mining and logging money. But the trap I’ve outlined above is a key feature of the political economy of Solomon Islands and Papua New Guinea. And – because of its self-reinforcing nature – it’s going to be very difficult to shift.

The good news is that there are many people in both countries who want to bring change. In recent years I’ve had the good fortune of meeting a lot of them. I don’t know what their pathway to success is, but I think positive change is possible if they can successfully engage in national collective action.

Aid can also play a helping role in both countries. It won’t change either country’s political economy, but if it’s given intelligently it will help hold key government institutions together, providing space for change to emerge from within. If given cognisant of the realities of Solomon Islands and PNG’s political economies, aid can also help to provide services and to ameliorate human suffering for the time being.

In the short-term, aid can help if it’s given well. In the long-term, change will come even if the clientelism trap will be hard to escape.

This piece is published in partnership with Policy Forum, Asia and the Pacific’s platform for public policy analysis, debate and discussion. It is based on the author’s article in the Asia & the Pacific Policy Studies journal, ‘The clientelism trap in Solomon Islands and Papua New Guinea, and its impact on aid policy‘. All articles in the journal are free to read and download.