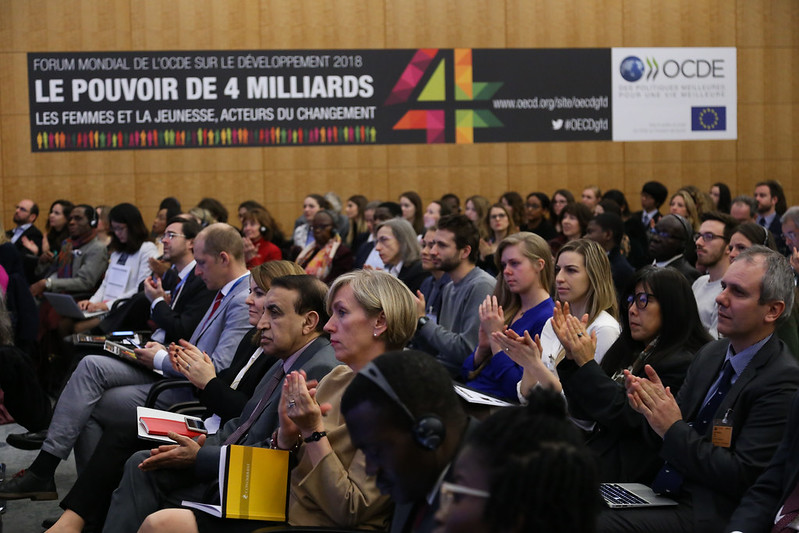 Over the last two decades the loudest, most popular books about foreign aid have been polemics: sermons imploring us to give, or treatises denouncing the entire endeavour. It’s a pity.

A pity because it creates the impression that aid is a singular thing, which either works or doesn’t. In reality, aid is diverse. Sometimes it’s given to help developing countries, sometimes to advance donors’ interests. Some aid involves tiny NGOs, some involves giant multilaterals. At times aid goes to reasonably well-run states, at times it goes to countries on the edge of anarchy. Sometimes aid succeeds, sometimes it fails.

Aid is a motley collection of practices, just similar enough to get lumped together. If we want aid to work, we need to learn about its differences – why they occur, and what their impacts are.

Simone Dietrich is an associate professor at the University of Geneva. Once, she was an aid worker in the Balkans. There, she encountered a puzzle. Some donors weren’t particularly interested in short-term deliverables and tended to work with or through recipient country governments. Other donors did the opposite. They avoided recipient governments, using intermediaries like NGOs and private firms instead. And they focused a lot on short-term outputs.

There was no obvious reason for this difference. The donors were all government aid agencies or multilaterals. They all, more or less, had the same objective: reconstruction and development. They were all part of the same international community. They read the same reports and went to the same conferences. Yet they had very different approaches. Why? 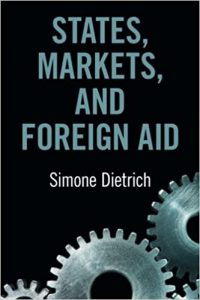 States, Markets, and Foreign Aid is Dietrich’s attempt at answering this question. It’s not a prescriptive book: she doesn’t make the case for one or other approach. Rather, she uses social science to explain why the difference exists.

Her explanation, put simply, is history.

When confronted with economic woes in the late 1970s and early 1980s, some donor countries – particularly but not exclusively anglophone ones – underwent a domestic policy revolution in which the state retreated from active involvement in the economy and left more space for markets. Other countries, such as Germany, France and Japan, remained statist. Both types of country retained some sort of welfare system (often a threadbare one) but even this differed. Market-oriented countries did more to farm out welfare provision to third parties.

At that critical juncture two very different approaches were followed. And while policy positions shuffle here and there, radical breaks are rare, so the difference between market-oriented countries and statist ones has remained, to some degree, ever since. Of course, not all statist countries are identical, nor are market-oriented ones, but there’s enough of a distinction, Dietrich argues, to have explanatory power.

Although the main differences between statist and market-oriented countries involve domestic policy, foreign aid was also affected. Because donor agencies are risk averse, they adopt practices aligned with their country’s domestic approach to the role of the state. For statist donors this often means working in sustained partnership with recipient governments. For market-oriented donors it frequently means avoiding them.

The differences are most pronounced when recipient countries are poorly governed. All donors tend to bypass dysfunctional recipient governments somewhat, but market-oriented donors are particularly inclined to do so.

What’s more, because they outsource more, both domestically and with aid, market-oriented states are more focused on deliverables. They need to be, both to keep track of third parties, and to convince their restive political masters that success is afoot. (Whether success really is afoot is another question. Reports just need numbers to make it look like it is.)

That’s Dietrich’s explanation of different donors’ propensity to engage with, or avoid, recipient governments, particularly when governance is poor. It is, to be clear, an argument about degrees of difference. Germany doesn’t give all its aid as budget support, and the United States doesn’t give all its aid via contractors. But the difference is large enough to be meaningful.

Dietrich’s book is clearly written. Her argument is well grounded in theory, particularly historical institutionalism. And she carefully dots her empirical i’s and crosses her evidential t’s. She persuasively analyses cross-country aid data alongside survey evidence from donor officials. She also includes some good case studies (the gutting of USAID after the mid 1970s is particularly depressing) and draws on qualitative interviews. It’s a strong, persuasive piece of research.

I do have one caution though, for practitioners and advocates. States, Markets, and Foreign Aid is a book about tendencies, not destiny. You can see this in the chart below. It shows the share of New Zealand’s aid to Solomon Islands that bypassed the Solomon Islands government. The time series starts in the first year with reliable data. My data are from the OECD (also Dietrich’s source). You can download my workings.

In the 1980s and 1990s New Zealand suffered from a flare up of acute free-market fundamentalism. Things have moderated since, but New Zealand is still market-oriented. Solomon Islands is a major recipient of New Zealand aid. It’s also poorly governed. Yet as the chart shows, from 2008 to 2013 only 11% of New Zealand’s aid to Solomons bypassed the Solomon Islands government. Then, all of a sudden, everything changed. By 2017, 66% of its aid was delivered outside the government. After that, things reversed somewhat. 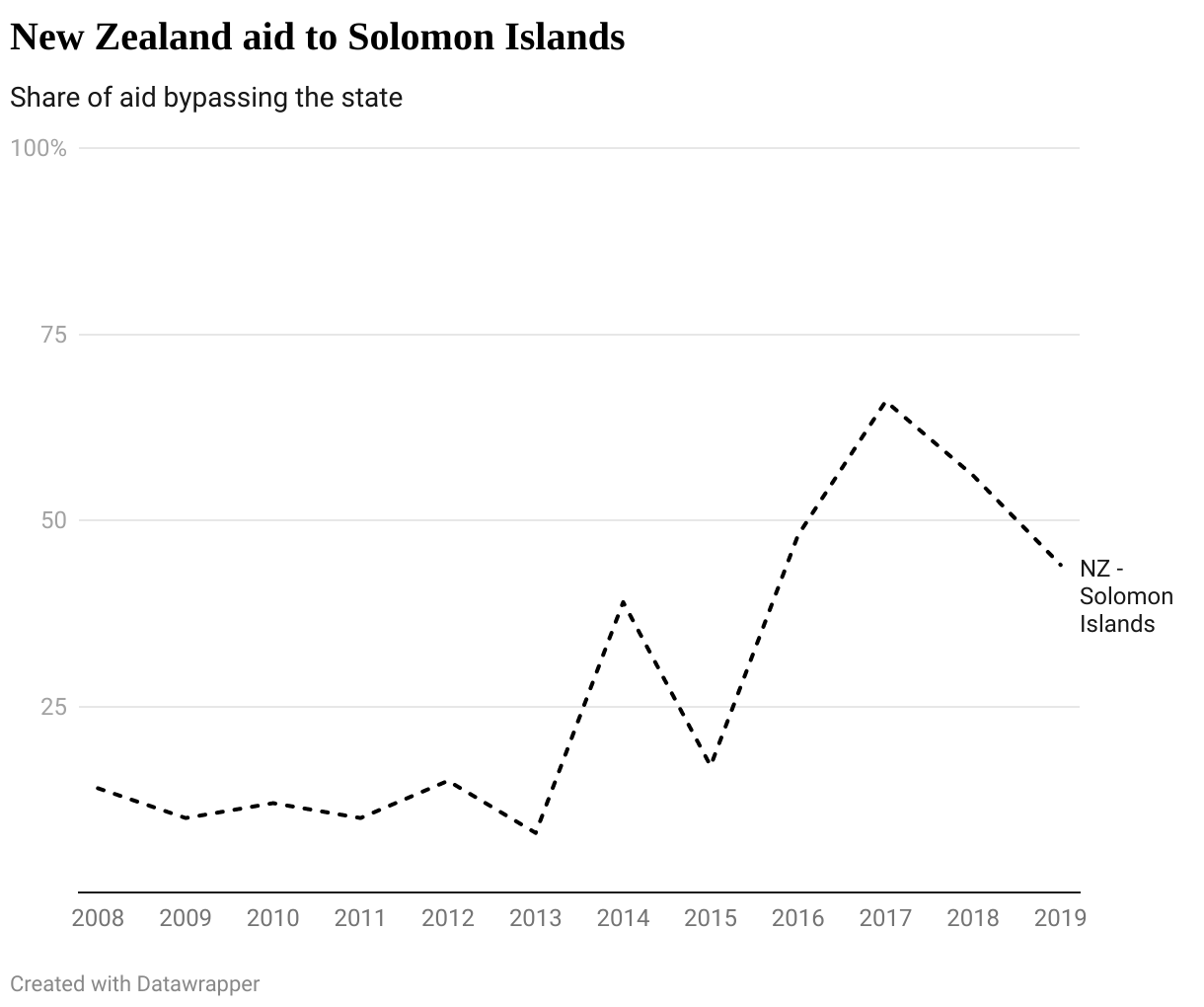 It’s not an inexplicable tale. First, the beliefs of aid workers, influenced by OECD agreements, were influential, then came a minister’s fixation with a runway, then the government changed. The case doesn’t falsify Dietrich’s argument either. It’s only one data point. Dietrich’s theory pertains to a general pattern. But the New Zealand example suggests reformers shouldn’t abandon hopes of change. Policy may be path-dependent, but it’s not set in stone.

So don’t lose heart reading States, Markets, and Foreign Aid, but do pay heed. It’s an insightful study that should be on the bookshelf of anyone wanting to understand why donors behave the way they do.

You can order States, Markets, and Foreign Aid from Cambridge University Press (and Amazon).