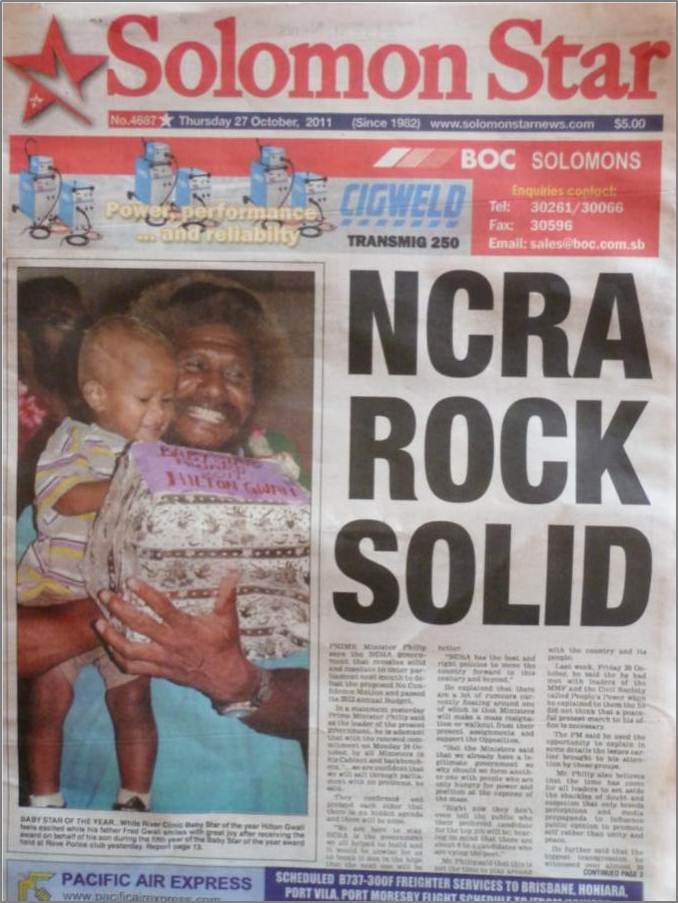 What are the causes of poor political governance in Solomon Islands?

In a previous post I pointed out that this is an important development question. And, prompted by two blog posts (here and here) and a Discussion Paper [PDF] written by Tobias Haque, I started to examine potential causes of poor political governance. In particular, broadly in agreement with Tobias, I argued that the central problems of political governance in Solomon Islands do not appear to be easily explained by simple cultural hypotheses. In this post I will examine Tobias’ alternative explanation. In a third post I will look at what, if anything, might be done about problems of political governance in Solomon Islands.

In his posts and papers, Tobias argues that the problems of politics in Solomons are best explained by a model of rational actors following incentives that stem from the nature of the Solomons’ state.

He argues that, because the state is weak, because most Solomon Islanders live in rural areas where its reach is limited, and because their needs are pressing, Solomon Islanders vote for the candidate who they think is most likely to provide them with immediate local assistance. Moreover, Solomons voters are caught in a collective action dilemma. In an electoral system where voters only vote for one MP out of 50, and in the absence of strong political parties or something similar which might provide confidence that others nationwide are voting for national reform, it is effectively impossible to vote for national change. Tobias argues that the rational thing for voters to do is to choose the candidate most likely to help them directly — and that this is what they do. Unfortunately, sensible local voting doesn’t aggregate to good national outcomes. Because voters vote and punish MPs on their local performance MPs don’t have an incentive to run the country well, and so they don’t.

Tobias’ explanation is a good one and there is a strong tradition in political science of rational choice models of politics and institutions. And while these models may hinge on problematic assumptions about human behaviour, as I explain here, it would be a mistake to dismiss them out of hand.

The rational choice model that Tobias proposes also resonates with much of the qualitative data that I gathered in my fieldwork. In particular, people often told me that voters voted first and foremost in search of local assistance; and voters could usually offer very reasonable, if not perfectly rational, explanations of how people figured out which candidate would be most likely to offer assistance. Yet, rational choice explanations don’t fit with all my interview data, nor are they completely commensurate with election results.

The first problem for such explanations is that if you posit a world of atomised rational voters, you find yourself back where we were early in last week’s post needing to explain why election results in Solomons confound Duverger’s Law, the prediction that first-past-the-post electoral races will tend towards two party competitions (or two candidate competitions in the absence of parties). This should happen in a world of rational voters because voters ought to abandon favourite candidates for next-best candidates, who are more likely to win. After all, in a first-past-the-post political contest, voting for a no hope candidate is effectively wasting your vote. This tendency, or something similar to it, should be present not just in countries with ideological cleavages but also clientelist polities such as Solomons, where voting for a candidate that is likely to loose means there is little chance of getting anything from the victorious MP who will focus resources on his or her supporters.

The second problem is that in some constituencies, within-constituency vote patterns vary in a way that seems at odds with a model that posits a world of equally rational actors everywhere. Take for example the case of West ‘Are ‘Are. The chart below shows 2010 election results broken down by polling station. Each line is a polling station. Each colour is a candidate. Clearly, the two different halves of the constituency have very different results patterns. In one half, large blocks of votes go primarily to one of two candidates. In the other half, votes are spread among many different candidates. Why? It is hard to explain such variation with a simple rational choice model. 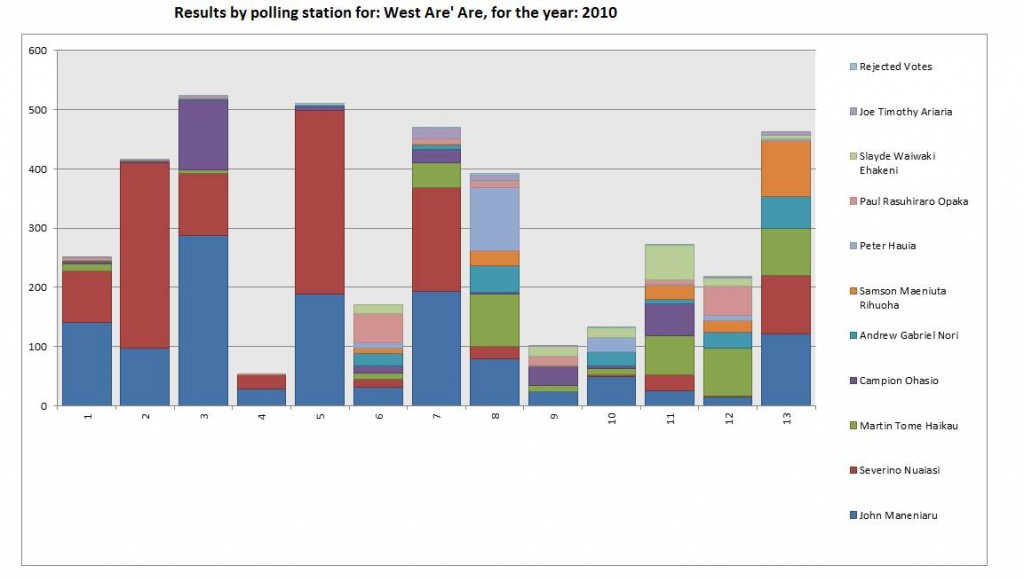 The third problem for rational choice explanations is that, while they were clear about voters seeking localised material benefits, when asked why people choose to vote for the candidates that they voted for, many of my interview respondents did make reference to social features that could broadly be described as cultural. People frequently told me that in their village voters chose Wantoks, or relatives, or members of the same clan.

So what is going on? Is it culture after all?

I think the answer is that in Solomons, for many voters, cultural features do play a role in the decisions they make about voting, but that culture is neither blinding nor binding. Importantly, when interviewees would tell me about Wantok voting they could also provide a reasonable, broadly rational, explanation for why it took place. Everything else being equal, people would vote for Wantoks because, owing to the presence of norms of reciprocity within kin groups, people were more likely to obtain assistance from Wantoks if they won. This wasn’t blind loyalty, though. What is happening is simply that voters, who find themselves caught in a principal-agent type dilemma are using a reasonable heuristic to determine who is likely to help them. Significantly, when provided with other information about candidates’ propensity to help, such as past assistance, people will vote for candidates to whom they are not related (this is what explains the success of the Vietnamese candidate in West Honiara). Likewise, most people won’t vote for Wantoks if they’ve proven in the past to be unhelpful. What we have here is cultural features interacting with something akin to rational choices being made by voters in search of assistance.

Another interaction that occurs is between culture, power, and voter choices. In the case of the West ‘Are ‘Are result patterns, the answer stems from the fact that half of the constituency villages are led by powerful hereditary chiefs, who are able to tell voters who to vote for. In the other half of the constituency, village leaders have less power, and voters are free to choose themselves. The half with strong leaders is, of course, the half with simpler result patterns.

Here, culture is playing an important role in determining election outcomes by determining who has the power to tell others how to vote. While the West ‘Are ‘Are situation may not be that common across the rest of Solomons, on a smaller scale, culture and power often do work together to constrain voter choice within families. Specifically, women are often not free to vote as they choose, and are expected to vote as male family heads tell them to.

Finally, we have the lack of electoral convergence (Duverger’s law) to explain. Here I am less certain, but I think the most likely explanation is that political convergence doesn’t occur often in Solomons electorates because Solomons constituencies typically lack the social features (like cross cutting civil society movements) that allow people to interact in a way that fosters political trust and allows large-scale, ongoing collective action. A good example of how such social features work is the way that trades unions brought labour related parties into being in much of Western Europe and how this subsequently shaped party politics thereafter. Absent repeated interactions mediated by the rules of cross cutting entities, and it is very hard for consistent patterns of collective political interaction to form. There is too much uncertainty and room for double dealing.

Where does this leave us then? With several observations. First, simple cultural models of politics that tie voter choices and politics to blind Wantok loyalties, or the legacies of Big Man culture, do not satisfactorily explain why Solomons experiences poor political governance. Tobias’ rational choice explanation is an improvement. But the last thing we should do is conclude, as Margaret Thatcher once did, that “there is no such thing as society”. Through a variety of means, the social and cultural features of Solomon Islands do play a role in the politics the country experiences. This fact doesn’t render rational choice models of politics invalid, but it does mean we need to use them in a way that is careful and cognisant of the way people’s choices are shaped by social structures.

Quite possibly Tobias would agree with me in all this: in his paper he concede some role for culture. Yet he offers little detail on what this role might be. What I hope I’ve done here is fill in some of this detail and, in doing so, contribute to an ongoing discussion.

In my next post I will look at what, if anything, might be done to improve political governance in Solomon Islands. This is where the biggest differences between my view and Tobias’ lie.