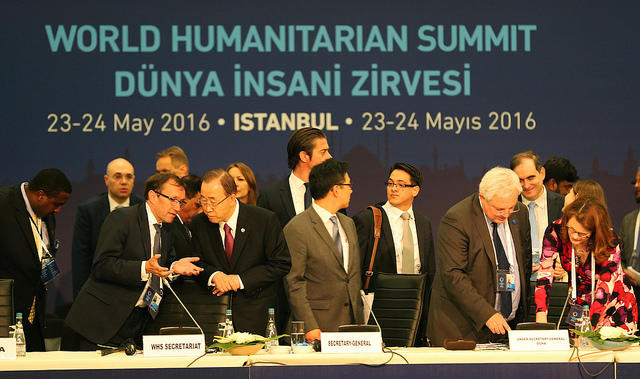 The Summit, hosted by Turkey and organised by UN OCHA, developed out of the Secretary-General’s Agenda for Humanity, which is driven by concern at the growing number of people in crisis, outrage that humanitarian action continues to be used as a substitute for political solutions, and frustration at an unwieldy international aid architecture that is fragmented, under-funded and outdated.

Four years in the making, the Summit was preceded by an extensive consultation process, which engaged more than 23,000 stakeholders in eight regional consultations and several thematic consultations. It culminated last week in a two-day meeting of over 9,000 participants, including 55 heads of state or government and delegations from 175 countries.

The Summit is a global call to action – a ‘once in a generation opportunity’ to reaffirm a collective commitment to humanity, transforming humanitarian action by committing to five core responsibilities. Seven high-level roundtables were supplemented by 15 special sessions, a Grand Bargain agreement to secure more flexible, multi-year and local funding, and a further 100 side events. Represented by the Minister for International Development and the Pacific, Australia announced commitments to the Core Responsibilities, including a statement to the Special Session on Inclusion of Persons with Disabilities in Humanitarian Action and remarks in relation to the Connecting Business Initiative.

Commentary in the lead-up to the Summit was predictably polarised. Some claimed it would be a ‘total mess’ due to a lack of political will to fulfil existing international legal obligations, the non-binding nature of commitments, and the blurring of humanitarian and development agendas, which threaten the principles on which humanitarian action is founded and arguably dependent. The high-profile withdrawal of Médecins Sans Frontières, claiming it would be a ‘fig-leaf of good intentions’, further threatened to undermine the Summit’s credibility. Others were more optimistic, arguing that the process was democratic and transparent, and the agenda bold and visionary.

So which view proved to be correct? In reality, a little of both.

USAID-branded peppermint lip balm was among the free merchandise on offer to exhibition visitors, leading some participants to privately muse whether it was more akin to a humanitarian carnival than a serious global platform for change. However, success or failure are not the only two options for this Summit. In many ways, the Summit is a microcosm of humanitarian action itself: humanitarian actors over-compensating for a lack of political will to secure solutions, over-representation by self-interested and field-detached bureaucrats, and governments holding incongruous policy positions with apparent ease. The Chair’s Summary lexicon is full of ‘affirmation’, ‘awareness-raising’, ‘reaffirming’ and ‘recognising the need for’: hardly descriptors of a bold new political commitment to put humanity first.

But in the midst of it all, small humanitarian gains are carved out and proudly secured, by both governments and humanitarian actors. Some of the more concrete outcomes include pledges to increase funding for conflict prevention and resolution, gender equality programming, education in emergencies, and for the Central Emergency Response Fund. New thematic initiatives were launched including a Compact for Young People, the Global Preparedness Partnership, a Global Alliance for Urban Crises, a Global Alliance for Humanitarian Innovation, and the Connecting Business Initiative.

The big picture may look bleak, but hope can be leveraged and success achieved incrementally. From my Summit ‘window’ of three special sessions and five side events, emerged the following observations:

People with disabilities had the opportunity to express why the new Charter on Disability Inclusion in Humanitarian Action is so important to them.

The conduct of hostilities – not just the protection elements of International Humanitarian Law – was framed as a deeply feminist issue, and one that has gendered impacts.

A young woman, Nadia, powerfully told her story of survival and enslavement in Iraq, underscoring an urgent need for Security Council veto power to be withheld on resolutions designed to protect civilians, or at the very least to require states to offer a credible alternative to the protective action they are vetoing.

A male representative from the Tongan Ministry of Internal Affairs spoke about the protection needs of Pacific women and girls, and the need to address gender-based violence before and during disaster.

Mia, a woman with an intellectual disability, articulately advocated for the rights of persons with disabilities to be realised and, the very fact that the localisation agenda was on the agenda at all, speaks to a system that, for all its faults, has the potential to reinvent itself.

I too had a voice. I raised the need to re-think gender mainstreaming practice based on recent evidence from Nepal, which suggests that without intentionally and strategically addressing sexism and discrimination – in workplaces as well as in programs and services – policy objectives for gender equality will continue to be unmet. Gender mainstreaming needs to reorient towards measurable outcomes for women and girls.

I also highlighted a ground-breaking research project mapping the impact of sexual exploitation and abuse (SEA) on peace operations, exposing links between SEA and the ability of the international community to fulfil its goals related to promoting peace and security.

Médecins Sans Frontières were right to pull out of the Summit and highlight the desperate need for world leaders to fulfil their legal and moral obligations over political preservation and self-interest. Others were right to turn up and join together in articulating a vision for a better humanitarian architecture, one that is more inclusive, more equitable, and more effective at alleviating suffering.

The Secretary-General’s desire for a unified vision of change has not been fully realised. However, we are slightly closer to achieving that vision than we were before the Summit took place. The pressure is now on to implement the Summit commitments. The next test will be when the Secretary-General reports on Summit achievements and outlines plans to progress commitments when he addresses the General Assembly in September 2016.

Louise Searle is a co-founding Director of Humanitarian Advisory Group, a Melbourne-based social enterprise committed to excellence in humanitarian practice.

Louise Searle is a co-founding Director of Humanitarian Advisory Group, a Melbourne-based social enterprise committed to excellence in humanitarian practice.