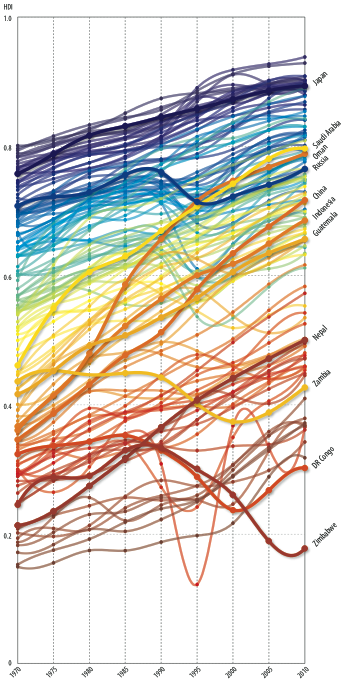 The report’s lead author, Jeni Klugman (an Australian of whom we should be proud), was in Canberra to launch the report. Four panellists – Bob McMullan (former Parliamentary Secretary for International Development), Ron Duncan (Emeritus Professor at the ANU), Vincent Ashcroft (AusAID) and I – responded, and the session was wrapped up by Marc Purcell,  the Executive Director o the Australian Council for International Development (ACFID).

Rather than focus on a theme (such as migration, climate change or equity, as these reports have done in the past), the 2010 report takes the opportunity to reflect on human development trends over the last 40 years. Much of the analysis is based around the report’s flagship indicator of progress, the Human Development Index (HDI), which is a composite indicator of income, health and education. In essence, the HDI defines and measures development in a multi-dimensional way, and offers an alternative to traditional economic measures of development progress (e.g. GDP, income and consumption), which many, including me, believe are inadequate on their own.

Key trends and messages are reflected in the report’s summary, which is well worth a read. For me, highlights from this summary, and Jeni’s presentation, were:

The report also introduces changes to the way the HDI is calculated, and two new indices: the multidimensional poverty index and the gender inequality index. The methodological construction of these indices, and their policy usefulness, received much attention from Vincent Ashcroft and Ron Duncan at the launch. Of course they’re not the first to air these concerns – see Easterly’s critique and the debate between Martin Ravallion and Sabina Alkire on the MPI. While I acknowledge the importance of these debates, and methodological rigour, I also believe that we should take what we can from these indices, recognising potential shortcomings, and use them to inform policy choices.

I hope and expect that the Aid Review, and AusAID, will reflect on the report’s findings. For instance, should Australia’s aid program be concerned about rising inequality in a number of our development partner countries? Does this trend call for a change to the modalities and priorities in some of AusAID’s country programs (for instance, does this mean that tax policy, inclusive growth and redistributive transfers need greater prominence in aid policy dialogue?) Related to this, and with the aid program’s current and likely future Asia-Pacific focus in mind, what should the break-down of aid allocations be between the poorest countries, where a quarter the world’s poor live, and middle-income countries, where three-quarters of the world’s poor live?

Of course, Australia’s place in all of this goes beyond aid. As my previous post highlighted, Australia’s trade, migration, security, climate change and technology policies have implications for human development globally, including opportunities for the world’s poorest. Australia has the second highest HDI in the world, meaning in terms of our income, education and health, we’re only behind Norway. Given this, there is no excuse for ensuring that our policies do not harm those less fortunate.