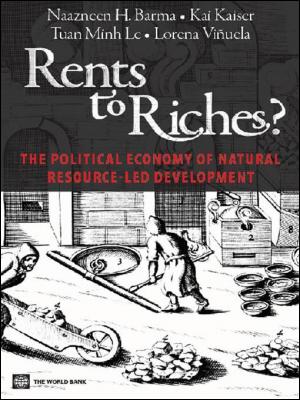 Rents to riches? A new look at the resource curse

Natural resource endowments and the associated economic rents—if well harnessed and managed—can serve as a boon to developing countries. But, too often, nations that are more dependent on nonrenewable natural resources such as oil, gas, and mining fall prey to the “resource curse,” growing more slowly than resource-poor countries and suffering from weaker governance and institutional quality.

As global demand for natural resources grows—and in response to historically high commodity prices—the push for new discovery and intensified extraction has increasingly moved into the developing world (Figure 1). Today, the International Monetary Fund classifies over 50 low- and middle-income countries as resource-dependent, with their share of resource revenues in total revenue intakes averaging over 25 percent during the period 2006–08. In many of these countries, natural resources are the essentially the main game in town—and the extractive industries sector is both shaped by and, in turn, influences political, economic, societal, and institutional dynamics. Understanding the political economy of resource rents is therefore crucial to achieving sustainable development built on resource riches. 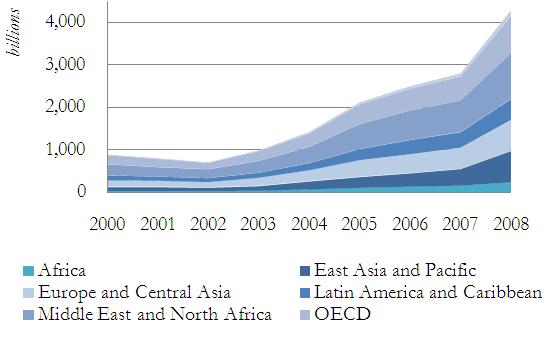 Scholars and development practitioners know a lot about both the political and economic characteristics of the resource curse; as well as promising macro policy options for solving typical problems such as Dutch Disease [pdf]. But we have fallen short of translating broad agreement on “good practice” policies into concrete steps to address the institutional and political obstacles associated with extracting and allocating resource rents for developmental purposes.

Rents to Riches, a new World Bank book that I co-authored, builds upon 13 country case studies of resource-dependent developing economies in Africa, East Asia and the Pacific, and Latin America and the Caribbean. We emphasize not “good practice” but instead the notion of “good fit”—taking the position that welfare-promoting policies, institutions, and governance must be tailored, at least in part, to a country’s specific context. Adopting an approach to institutional arrangements that emphasizes local variation and innovation as much as best international practice will be central to the ability of governments and development partners to achieve salutary developmental outcomes. Rents to Riches attempts to make sense of suboptimal natural resource management (NRM) and suggest better policies by focusing on two central political economy dimensions: the degree to which governments can make credible intertemporal commitments to both resource developers and citizens and sustain durable sector policies, and the degree to which governments are inclusive and inclined to turn resource rents into public goods and sustainable development outcomes.

Natural resources yield “rents”—or extraordinary profits from their production—that are crucial to the political economy of resource-led development. Two key issues emerge in characterizing how a government manages its natural resources: (1) How effectively does a government generate and capture rents from the extractive industries? (2) How does the government spend resource wealth and to what extent is it invested in a sustainable, pro-development manner?

In turn, the degree to which countries can make credible intertemporal commitments and policies oriented toward political inclusiveness determines how a country actually experiences the resource paradox. In non-inclusive settings where the intertemporal credibility of commitment is low, rent generation will be weak because the state will find it difficult to make beneficial extractive bargains with resource developers, and rent allocation will be biased toward consumption by political-economic elites and away from saving and investment for society. Factors that make intertemporal commitments more credible—by lengthening time horizons and strengthening institutionalization and the enforcement of property rights—will tend to improve a country’s performance in terms of rent generation by enabling governments to strike better deals, at a lower risk premium, with developers. Factors that increase political inclusiveness—incorporating more political, social, and economic groups into decision making—will make the state more accountable to society and will orient rent allocation toward collective welfare through the provision of public goods and investment for sustainable development.

This analytical framework points to three basic types of incentive-compatible interventions to mitigate the resource curse. [The Rents to Riches summary note [pdf] highlights some specific suggestions in the extraction, taxation, and investment of natural resource rents.] Some interventions are aimed primarily at extending time horizons, thereby enhancing intertemporal credibility. Other reforms emphasize mobilizing stakeholders in to enable collective action in natural resource management, thereby broadening political inclusiveness. A third form of intervention is slightly different: it enclaves institutions and capacity in NRM so that some, albeit limited, functionality is possible even when the wider political economy dynamics are perverse.

Orthodox approaches to natural resource management that seek to impose best practice arrangements in the sector often miss the distinct policy priorities and reform opportunities in particular countries. A good-fit approach is inherently contingent on context and hinges on the view that building functional institutional capability matters more than achieving specific institutional forms to do so. And it rests on a clear understanding of stakeholder motivations in designing incentive-compatible interventions. Rents to Riches thus demonstrates the potential for mediating the resource paradox through intelligent and resilient institutional design.

Naazneen Barma has worked extensively for the World Bank, with a regional specialization in East Asia and the Pacific. Naazneen is currently Assistant Professor of National Security Affairs at the Naval Postgraduate School.

Naazneen Barma
Naazneen Barma has worked extensively for the World Bank, with a regional specialization in East Asia and the Pacific. Naazneen is currently Assistant Professor of National Security Affairs at the Naval Postgraduate School.