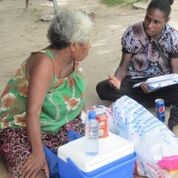 This month, the Development Policy Centre and partner, the Developmental Leadership Program (DLP), began a new research project to test the impact of anti-corruption messages in Papua New Guinea. The research is being conducted through Anglo Pacific Research.

For the last few weeks, on the hot streets of Port Moresby, a team of 12 researchers have been interviewing local men and women to determine how they might respond to different messages about corruption. Each respondent is randomly assigned to a group where they have one of four stories and an accompanying visual read to them. The stories, each a separate narrative, emphasise the legal, moral and communal aspects of corruption in PNG, as well as its ubiquity.

Each group of interviewees comprise a ‘treatment’ group, and their responses will be compared against a ‘control’ group – a group of respondents who are not read a story or shown a visual.

In early February, Devpolicy’s Grant Walton travelled to the capital to assist Anglo Pacific researchers with data collection, a phase of the research anticipated to last until early March. After this, the DLP’s Caryn Peiffer, with input from Dr Walton, will statistically examine how exposure to different corruption messages shapes perceptions and willingness to oppose corruption.

Further information about this research can be found in this Policy Brief. 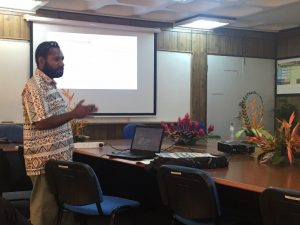 In addition, in early February, the University of Papua New Guinea’s Peter Kanaparo and Devpolicy’s Grant Walton presented on the implications of education polices on schools in Gulf and East New Britain. The presentation – with input from Tara Davda, also from Devpolicy – argued for the department to reconsider the current ban on school project fees, and moves to recentralise school funds through proposed District Education Implementation Committees. They also argued, given increased funding to schools, that the department look at ways of better supporting school inspectors, and training school communities in financial management, conflict resolution and community engagement.

The meeting was facilitated by Peter Michael from the National Research Institute.