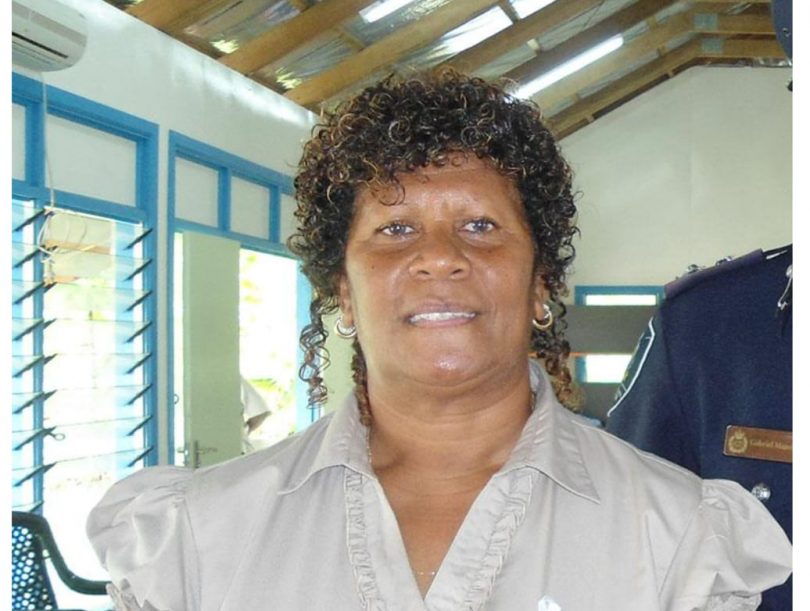 In late March 2022, 16 years after she was first elected to the Isabel Provincial Assembly in Solomon Islands, Rhoda Sikilabu became the country’s first female premier. The four-time MPA and former Deputy Premier replaced Leslie Kikolo who resigned a day before he faced a motion of no confidence.

The local coverage of Solomon Islands’ first female premier – in the Solomon Times, the Island Sun, Twitter, as well as the Australian and New Zealand Pacific outlets – was pleasantly surprising and suggests that women’s political leadership is finally becoming newsworthy.

Interviewed about her – unopposed – elevation to the position, Premier Sikilabu noted that:

[The Assembly has] been so empty of women … I have done so many things to attract women. This is the most important thing in my life. I have worked alongside, very peacefully, all these male political leaders. I’ve been very down to earth. I lift women up, I visit the women groups … I design programs to support women, and I convinced all these male leaders to support my ideas.

There is no denying this is a remarkable achievement, but it did not happen overnight.

I first met Premier Sikilabu in 2012 when she attended the inaugural Pacific Women’s Parliamentary Partnerships (PWPP) Forum. At that time, Rhoda was the only elected politician in Solomon Islands who could attend a forum of otherwise national politicians across the region. I remember her as feisty, engaging, passionate and ambitious. She enthralled her Pacific sistas (and a number of state and federal Australian women politicians) with stories of canoeing through mosquito-infested rivers to reach very remote voters in her provincial electoral campaign. And she networked effectively. 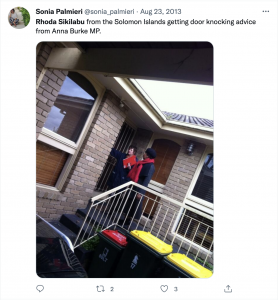 One of the key objectives of the DFAT-funded PWPP program was to provide Pacific women politicians and candidates with mentoring. With the Australian contacts she had made at the Forum, a mentoring package was designed and in 2013, Rhoda spent time with the then Deputy Speaker of the Victorian Parliament, Christine Fyffe, and then Speaker of the Australian House of Representatives, Anna Burke. With Christine, Rhoda attended meetings in the electorate and watched the bemusing shenanigans of the Victorian parliament, while with Anna, Rhoda doorknocked the streets of Chisholm in the rain. With these experiences in her back pocket, Rhoda subsequently campaigned for a seat in the Solomon Islands national parliament. She won just 7.6% of the vote in her electorate of Gao/Bugotu, placing fourth of five candidates.

I remember that week in Melbourne with Rhoda as very challenging. I marvelled at the lack of relevance of the experiences of Australian women politicians to Rhoda’s world, although I knew that both Christine and Anna had put in an extraordinary effort to support her and her political ambitions.

I also struggled with the expectation of the donor that these activities would lead to ‘change’. I wrestled with the program’s monitoring and evaluation requirements that asked me to outline the likely change within ‘the next six months’. I honestly could not see this activity as making any difference in that kind of time frame.

Fast forward a decade, and it has become much more accepted within both the donor and academic communities that promoting women’s political leadership in the Pacific is a long-term game. It also needs to be supported in ways that are, in the words of the Honourable Fiame Naomi Mata’afa, Prime Minister of Samoa, ‘Pacific led, relevant to the Pacific cultures and contexts, and underpinned by positive expressions of Pacific cultural values’.

It is not surprising that Rhoda’s elevation to Premier of Isabel Province, a matrilineal society, comes after a lot of hard work. It also comes after years of her working with men, and demonstrating her leadership capacity to those around her; colleagues, family and voters. In her words:

Yes, we are matrilineal [but] we still need men to champion [women]. If you are in a political office, you have connections. The connections you have, working closely with all these political leaders, I have found ways to break through … So what I did was, I empowered a group of men and then we [moved] a motion. And the other side of the floor supported it. ‘Yes,’ they said, ‘she is a good leader, she is people oriented, let’s give women a chance’ …

I suspect this everyday work, however, has not been supported through donor-funded activities.

What then does Rhoda’s success story mean for the Australian Government’s support of Pacific women’s leadership programs?

It means the aid program should support Pacific development actors and scholars in taking a long-term approach. We need to better appreciate the past to support current and future interventions.

A repeated lesson learned in Pacific women’s political leadership is that change is incremental, and non-linear. Increases in women’s representation have often proven to be unsustainable, but are always contextualised by Pacific women (and men’s) ability to seize political opportunities. In this case, an opportunity presented itself just before a motion of no confidence deposed the sitting premier.

Research by academics and practitioners needs to build a solid evidence base around these contexts rather than simply reporting on the success or otherwise of women candidates. Consistently mapping these contexts over time will be useful for candidates and our wider understanding of the gendered political economy of elections in the Pacific.

Expectations of change in the short term in the Pacific are unrealistic at best, as are expectations of change resulting from largely irrelevant (if well meaning), Australian-centric, experience. Supporting actors and scholars in better understanding the local contexts in which Pacific women leaders work, and the long time frames they will need to effect change, would be far more productive.

Sonia Palmieri is a Gender Policy Fellow with the Department of Pacific Affairs, Australian National University. She has worked across academic, development and parliamentary institutions, focussing on understanding and improving women’s political leadership and participation, especially in the Pacific.