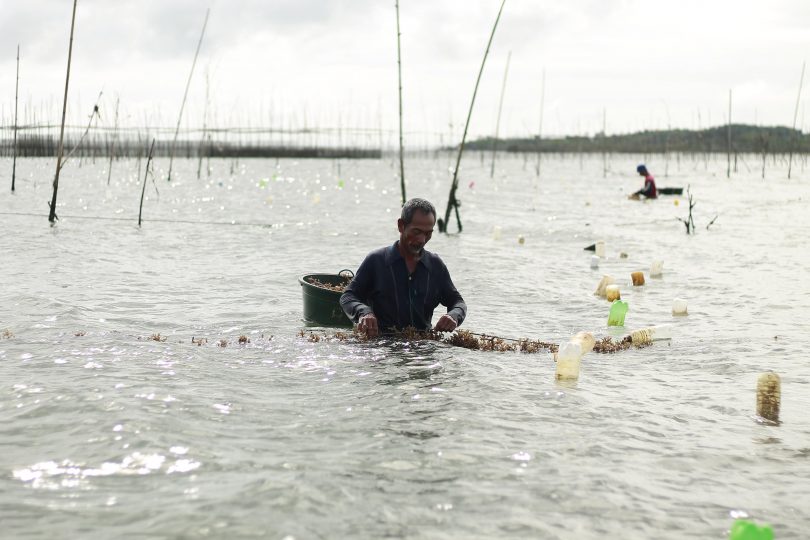 Growing seaweed has become an important source of income in archipelagic Southeast Asia. Seaweed thrives particularly well in the clean coastal waters of Indonesia and the Philippines.

The Philippines has moved up the value chain and is a global leader in refining seaweed into carrageenan, a thickener widely used in food and pharmaceutical products. The insertion of low-income coastal communities that rely on fishing into the global seaweed chain has benefited tens of thousands of households. But success is by no means guaranteed. 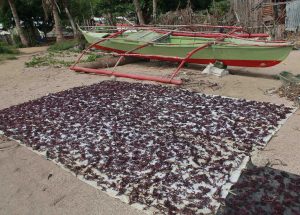 My recent Asia & the Pacific Policy Studies article compared two Philippine municipalities in Iloilo Province that cultivate seaweed. It demonstrates that sustaining insertion in global marine value chains is not only challenging but should also be seriously re-evaluated in areas with unfavourable conditions.

For my research, I conducted fieldwork in the municipalities of Estancia and San Dionisio in the northern part of Iloilo Province.

A survey of the same 45 seaweed growers/fisherfolk in 2015 and 2018–2019 and semi-structured interviews with key informants in both municipalities reveals highly diverging outcomes: growth and success in the municipality of San Dionisio, but failure in the municipality of Estancia where most households have returned to fishing as their major source of livelihood.

Cleaner coastal waters, a diversified socio-economic situation and the presence of an enabling local coastal governance structure have all contributed to a virtuous seaweed production cycle in San Dionisio. Most seaweed growers there make enough money to buy high-quality seedlings. Monthly household incomes rose between early 2015 and mid-2019 and several households managed to raise their income beyond the national food threshold – the income level necessary to get access to sufficient calories for a family of five.

Conditions in in San Dionisio have been more conducive not only to seaweed success but diversification more generally: there is more agricultural land available to cultivate, people tend to be better educated and local politics has been relatively enabling.

In contrast, the trend in Estancia has been one of a continuation of severe poverty despite an average rise in incomes. The loss of seaweed opportunities meant a return to fishing and to a mood of daily survival rather than the ability to plan and work towards more dignified livelihoods. Diversification to seaweed is challenging as the fishponds are owned by a longstanding landowning family. The majority of seaweed growers do not own any land and have used the coastal area with tacit approval from the landowners and the local government. 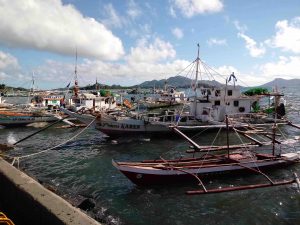 The loss of seaweed opportunities in Estancia, Iloilo Province, meant a return to fishing, 2018 (Edo Andriesse)

In Estancia, the loss in seaweed income was compensated for by job seeking elsewhere and resulted in growing dependency on the Philippine conditional cash transfer program. Many respondents in Estancia argued that it was difficult to find jobs in Iloilo City, other Philippine cities, or abroad because of a lack of education. By contrast, households in San Dionisio have also benefited more from outmigration through remittances.

Based on the empirical findings, I distil three implications. The first concerns the relationships between marine upstream value chains, collective action and local coastal governance. In San Dionisio the seaweed association has thrived and become more active in recent years, while in Estancia it has turned out to be rather ineffective. In places like Estancia, government agencies and non-governmental organisations could consider the facilitation of alternative forms of engagement that seek to strengthen local social capital formation and widen livelihood opportunities.

Second, in areas where physical geographies reduce the chance of successful aquaculture and diversification, promoting inclusive marine-protected areas — marine protection plus food security considerations — could be explored more closely. Successes are not likely to be achieved in the short term, but when land-related limitations are difficult to overcome, it might be more effective to focus on marine spaces. Not every coastal locality is suitable for growing fruits, vegetables or staple crops.

Third, providing public housing in areas with serious climate-related risks appears to be beneficial during extreme weather events such as Super Typhoon Yolanda, yet is not sufficient to make structural improvements in livelihood trajectories. Without additional income-generating opportunities, public housing alone will not be effective. Conditional cash transfer programs are more promising. Consideration should be given to introducing novel programs and incentives to adapt to climate change impacts.

A longitudinal, localised, comparative study has proven useful for understanding the effectiveness of initiatives aimed at inclusive value chains and reducing overfishing. As a result of unpredictable climate change impacts, it is essential to formulate flexible policies that do not bet on a single product to improve living standards. As many Southeast Asian coastal spaces still experience population growth it remains necessary to seek effective approaches that can tackle both poverty reduction and environmental degradation.

This article is published in partnership with Policy Forum. It is based on an article in Asia & the Pacific Policy Studies journal, ‘Local divergence and obstacles to spur inclusive coastal development in Iloilo Province, the Philippines’, by Edo Andriesse. All articles in the journal are free to read and download.

Dr Edo Andriesse is an Associate Professor in the Department of Geography at Seoul National University.