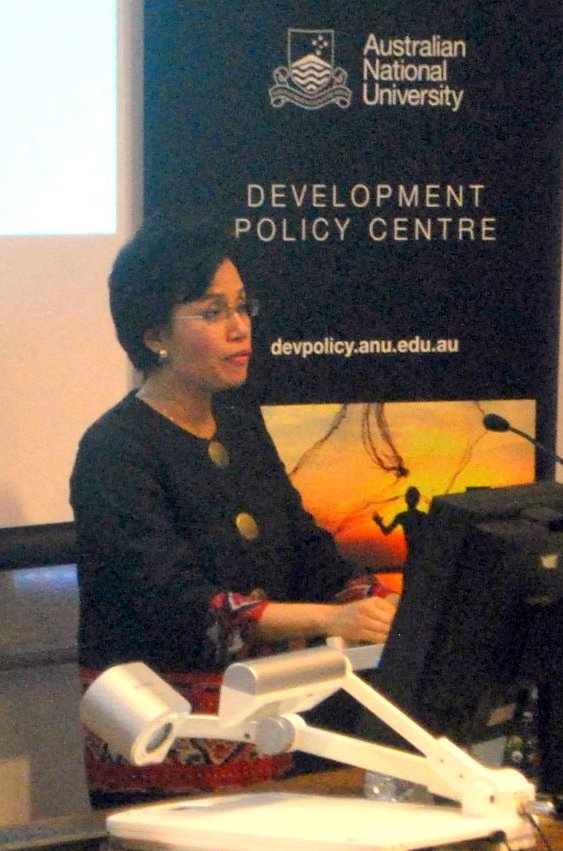 Last month, Sri Mulyani, Managing Director at the World Bank and former Indonesian Finance Minister, spoke to a capacity crowd at the ANU on her first-hand experience within the G20 during the financial crisis (the video of her speech is available here).

ANU gets its fair share of high-profile visitors, but few have Sri Mulyani’s celebrity status. The atmosphere of the event was electric, and Sri Mulyani was mobbed on her way out of the theatre. I have never seen it take 45 minutes for a speaker at the Crawford School to just get out of the building after an event.

Sri Mulyani Indrawati is an example of that rare breed, a celebrity with substance. She became Indonesia’s Finance Minister in 2005 at the age of 43. In this capacity she guided the economic policy of one of Southeast Asia’s largest economy, successfully turning around Indonesia’s corrupt tax administration leading to a large boost in much needed tax revenues, and then navigating the economy through the economic crisis of 2008. As a result, she built a reputation of integrity and earned the respect of her peers. James Castle, founder of the consultancy Castle Asia, shared a commonly held opinion here, stating:

In 2010, amidst  widespread speculation concerning the political pressure she was under (see here, here and here for more), Sri Mulyani resigned as Finance Minister and was appointed one of three Managing Directors of the World Bank.

There have been recent murmurings in Indonesia politics of her return, with supporters of Sri Mulyani declaring a new political party in her name (see here). I will leave it to others, however, to speculate about her political aspirations.

Both for what she did while Finance Minister, and for being appointed to such a senior position in the Bank, Indonesian students of the ANU turned out in droves. There was an overwhelmingly universal sense of pride in seeing one of their own representing the developing world at such a high level. As one Indonesian put it to me:

The lecture itself was very insightful and I’m sure many in the audience came away more mesmerized by her charm. Myself? I’m just proud to have her as one of the three Managing Directors at the World Bank.

And, indeed, her address was mezmerising, not least because it was completely ad-libbed. Through her account of her personal experiences as Finance Minister during the GFC and dealing with the G20 she conveyed more effectively the major challenges facing the G20 into the future than any more analytical or academic approach could have. Her candour, humour and willingness to share what others might protect as privileged information on the dynamics of international negotiations left the audience completely captivated for the 45 minutes or so that she spoke. Event chair Emeritus Professor Peter Drysdale, a veteran of public lectures commented to me afterwards that it was one of the best talks he had attended in his life.

Starting in the 1990s, Jim Wolfenshohn tried to make the World Bank popular again by cozying up to the NGOs. But now the Bank needs to be popular with its major clients. Putting developing country leaders into senior management positions makes a lot of sense, and Sri Mulyani’s appointment was a masterstroke.

But why stop at Managing Director? Sri Mulyani was a no-brainer for that position. Beyond her policy achievements, it is what she represents not only to Indonesia but the rest of the world that makes her a true global leader. A mother of three, with a PhD in economics, and internationally recognized for her integrity and ability, Sri Mulyani is an inspiration for a new generation of leaders around the world.

For all these reasons, Sri Mulyani, if she doesn’t go back to Indonesia, would be a great choice for the next president of the World Bank. President Zoellick’s term expires in June 2012. Perhaps it’s time to start some transition planning.