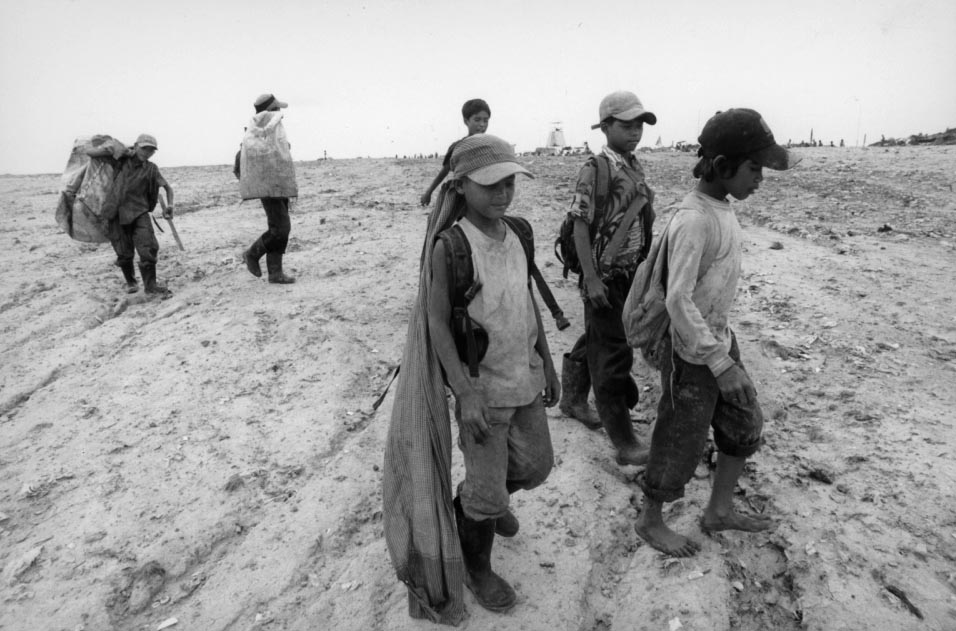 These children spend their nights at a refuse dump recycling to earn a living, Cambodia 2005 (Copyright Nick Danziger)

Last month I was among some 100+ people who attended a special pre-opening at the Drill Hall Gallery of Nick Danziger’s Revisited exhibition as part of the 2018 Australasian Aid Conference. It’s an exhibition that I was enormously pleased to see arrive in Canberra. After viewing it three years prior at the School of International and Public Affairs at Columbia University in New York, I had worked with the Development Policy Centre, Nick Danziger, and the Drill Hall Gallery to bring it to Australia.

It was easy to see why the opening drew such a crowd. Danziger, an internationally-renowned photographer and documentary film-maker, is also a passionate advocate for human rights and development, and a compelling speaker. And what stories he had to tell.

The genesis of Revisited was a commission Danziger received from World Vision in 2005 to visit eight of the poorest countries in the world to show the contribution that charities such as itself were making to the achievement of the eight Millennium Development Goals. The work took Danziger to Armenia, Bolivia, Cambodia, Honduras, India, Niger, Uganda and Zambia. What he found was that while schools were being built and wells dug, systemic change was only occurring in those places where it was driven by government policy, and they were the exception rather than the rule.

Danziger decided to document those people who were not being reached by development projects, and he realised that to gain a true understanding of the dynamics of poverty that he was witnessing, one visit wouldn’t be enough. Independently of World Vision, Danziger went back in 2010 and once more in 2015 to the same places, to try to find the same people and see how their lives had changed.

When people are living in countries where basic services and essential infrastructure don’t exist or don’t work, it’s something of a challenge to keep track of them. Yet, somewhat astonishingly, and with substantial local help, Danziger managed in both 2010 and 2015 to find all but one of the individuals he met in 2005. As a result, Revisited tells a series of stories of children, young people and their families, and the trajectory of development in their countries over a decade.

At the pre-opening, Danziger shared the backgrounds to gathering some of these stories, bringing us a step closer into the lives of those he met. Happy endings were few and far between, but they were there among the people he met in India and Bolivia, for example. It is in these countries where evolving or new laws had combined with the determination of individuals and communities to bring about positive change, including improved rights and protection for transgender people in Tamil Nadu in India, and higher levels of primary education and prenatal and postnatal care in Bolivia.

Sadly, the situation had drastically worsened in some of the places Danziger visited. In Honduras, the studious young boy who had loved school in 2005 and gave his grandmother hope for the future in 2010 had, by 2015, started selling drugs for a local gang to earn a living. Danziger recalled the now-teenager’s mother telling him of the moment she found her son laying on the ground with a policeman’s foot on his head, a gun pointed at him. He was flanked on either side by friends who had already been shot. With his mother pleading his case, the teenager was released with a warning. In five years his dreams of working in a bank had been replaced by a desperate scramble to survive.

Knowing that some 60 percent of Hondurans live below the poverty line is one thing. Seeing the individual reality of that played out for one family is another. This is the value of Revisited, and the complexity of it.

At the end of his presentation, Danziger told us that he had been approached in 2015 by the UNDP to exhibit his work in New York in the lead up to the announcement of the Sustainable Development Goals. However, on viewing the photos and reading the narratives that accompany them, the UN only wanted to show some of the stories (the positive ones) in a closed exhibition that would not be open to the public. Danziger declined. It was a missed opportunity for the UN to help the public, and policy makers, gain a deeper or renewed appreciation of the difficulty of development.

The Revisited exhibition is an opportunity to appreciate the multi-faceted nature of the work that goes into – and the sheer determination and commitment required by governments, communities, and individuals – to meet targets like those set under the MDGs and SDGs. Surely that’s a story worth telling.