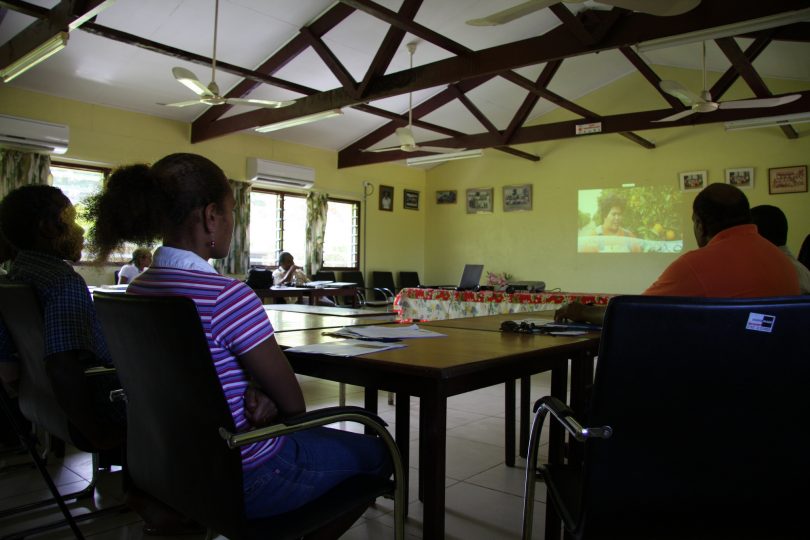 Seasonal workers from Vanuatu attend a pre-departure briefing (DFAT/Flickr/CC BY 2.0)

Since the establishment of Australia’s Seasonal Worker Programme (SWP) in 2012, the number of workers from Vanuatu has increased significantly from 119 to 1,533.[1] It has been established that labour mobility improves livelihoods (Bailey 2014; Bedford 2013; Gibson and McKenzie 2014). This is evident throughout villages and towns in Vanuatu, and is the reason thousands of ni-Vanuatu apply for the SWP every year. Using evidence-based research of ni-Vanuatu workers in the SWP, this post argues that this strategic policy of encouraging development for Pacific Island nations is effective, and most significantly, that participating in labour migration provides workers with new avenues of social mobility.

Sociologist Ashley Crossman states, ‘Social mobility is the ability of individuals, families or groups to move up or down the social ladder in a society, such as moving from low-income to middle-class. Social mobility is often used to describe changes in wealth, but it can also be used to describe general social standing or education’. We argue that the SWP enables workers to contribute to education, family, and community obligations, through either economic, material, or social remittances, which in turn creates new opportunities to improve workers’ social mobility. Social mobility should be included in evaluation and monitoring surveys that examine development impacts of SWPs in Pacific island nations, as these positive development impacts not only affect seasonal workers, but also their families and communities.

Through SWPs, workers experience different cultures, which broadens their knowledge. As one interviewee, Mark, said:

SWP make[s] me become independent to do something on my own. It changes my life, my attitude… I prioritise time with my family more than before. Working here makes me have a strong mind to do work and I am planning that when I return home make a big garden so my wife can harvest and sell crops at the market.[2]

Workers often mentioned they had a change of lifestyle, and they attributed their experiences in Australia to improved characteristics, such as their attitudes and behaviours, with many noting they became more ambitious, physically and economically independent, and spiritually minded. Levitt (2001: 11) argues these are social remittances, which are ‘the ideas, behaviours, and social capital that flow from receiving to sending communities’. These ideas change the perspectives of people, community and family towards them. Nonetheless, they must also be monitored for any negative consequences and impacts on sending communities.

Labour mobility opportunities make substantial contributions to sending nations. The importance of these programs is shown in the recent Vanuatu 2016 Post-TC Pam Mini-Census Report and Vanuatu’s 2030 The People’s Plan: National Sustainable Development Plan 2016 to 2030. ‘The People’s Plan has stipulated a goal to increase labour mobility nationally and internationally’. If the SWP is harnessed properly, it can contribute significantly and meaningfully towards self-development and sustainable development for Vanuatu.

Education establishes a person’s identity and societal position in Vanuatu. Educational qualifications often lead to (but do not always guarantee) paid employment that enables payment of house rent, water and electricity bills, food, transportation, and school fees for urban dwellers. For those residing in the rural areas, cash income is scarce but food from the gardens cultivated by the villagers is generally sufficient. Cash is generally in demand for the purpose of providing educational opportunities. In some villages, there can be hardship, particularly when there are environmental disasters such as cyclones, volcanic activity, drought or floods, and infrequent inter-island trading vessels make it difficult to generate incomes for school fees.

Such positive attitudes to education means that a primary motivating factor to apply for the SWP is to finance school fees. Workers want their children to achieve a higher level of education than they did; many SWP workers’ education ceased after primary school due to inability to pay school fees.[3] Of the 59 SWP workers interviewed, 64% were paying for school fees. However, this number is relatively low in comparison to other studies (e.g. Bailey 2014).

Different experiences have changed the status of workers. For example, interviewee Sean emphasised:

Working together with other Ni-Vanuatu workers under rules and discipline changes me not just [in] work but both spiritually and physically. With SWP, I learn new skills, language and socialising with others. Being a leader for my group the workers, farmer and family respects me for my good leadership. My life changes and I am happy.

Gaining experience in leadership changed his way of interacting with others. Often these changes can be as important as the financial gains because they are enduring practical life skills.

For SWP employees who come from villages that face hardship or are faced with remote or rural transport challenges, earnings from the SWP meet their immediate family needs. More often than not, starting a business is difficult for those from remote areas, but their goals are to build a life that is better than or supplements their subsistence lifestyles.

The SWP has created these opportunities. Participating in the program has enabled and increased social mobility. Luke from Santo mentioned, ‘Big change in my living and I am happy with it. My actions and words change that other’s perspective of me changes as well they trust me’. Furthermore, Jim from Ambae said ‘before SWP, I was nobody, have nothing, but now SWP made a big change in my life that I am now recognised and respected by my family’. Luke and Jim said that prior to the SWP, they were not recognised in their villages as men, as people with acceptable attitudes, and had no potential of gaining a reputation. Participating in the SWP opposes this negativity, through improved self-esteem and acceptance from society.

What seasonal workers take back to their community helps their family and other village members economically, socially, and materially through cultural circulation processes governed by ‘prescribed social obligations’ (Bailey 2014). ‘I help towards family and they respect me and are loyal when I need their help to do something’, said Jeffrey. Furthermore, sharing their knowledge from Australia is seen as valuable. Seeing how much they gain from market cultivation in Australia, Mark wants to practice this when he return home: ‘Things I learn while here, I share to my family, to improve our lives’.

The SWP provides an opportunity to increase social mobility through the ability to make money and contribute to ni-Vanuatu communities. Workers return home with economic, social, and material remittances. Being absent for six months from their family makes them think more critically about their decision-making and increases their seriousness to work in a productive way for their communities.

When returning home, contributions to communities and family create a new form of trustworthiness and it increases the social capital of workers, resulting in greater achievements and opportunities at home. Before labour mobility programs, education was the pathway to changes in social status. However, as our evidence has shown, labour mobility also provides new pathways to increased social standing, regardless of what background a worker comes from. This should be acknowledged in future research.

This post was originally published as Department of Pacific Affairs (DPA) in brief 2017/21.

[2] Interviews were conducted in February 2017 in Koo Wee Rup, Victoria.

[3] On average, most workers interviewed finished school in Year 6.

Gibson, J and McKenzie, D. 2014. The Development Impact of a Best Practice Seasonal Worker Policy. Review of Economics and Statistics 96(2): 229–43.

Sharon Wells is an administrator for Melanesian Seasonal Employers, based in Vanuatu, and was a participant in the 2017 SSGM Pacific Research Colloquium.