As a New Zealander it’s hard not to feel at least a little bit of Australia Envy. Not only are there all those Olympic medals, the soap opera stars, and the golden sand beaches, but by an increasing margin there is also the issue of Official Development Assistance. The increase in Australia’s aid budget might not have been as much as some of you had hoped but, to put things in perspective, the increase alone was still larger than the entire New Zealand aid budget.

Of course, the Australian economy is much larger than New Zealand’s but, even taking this into account, the increases in Australian aid stand in stark contrast to a New Zealand aid budget that is barely growing. New Zealand’s budgeted ODA spend (announced on May 16 as part of the 2013/14 budget) for the 2013/14 financial year is $567 million NZD. That is an increase on the estimated spend of $558 million NZD for this financial year, but as an increase it is less than expected inflation (so actually a small aid cut in real terms), and less than anticipated GNI growth, meaning New Zealand’s aid to GNI ratio will fall. Figure 1 below illustrates this. (Note that future GNI figures are our estimates based on numbers from the last budget adjusted for changed GDP growth; we are awaiting official GNI data from Treasury and will update this post when we have it. We do not anticipate major adjustments.) 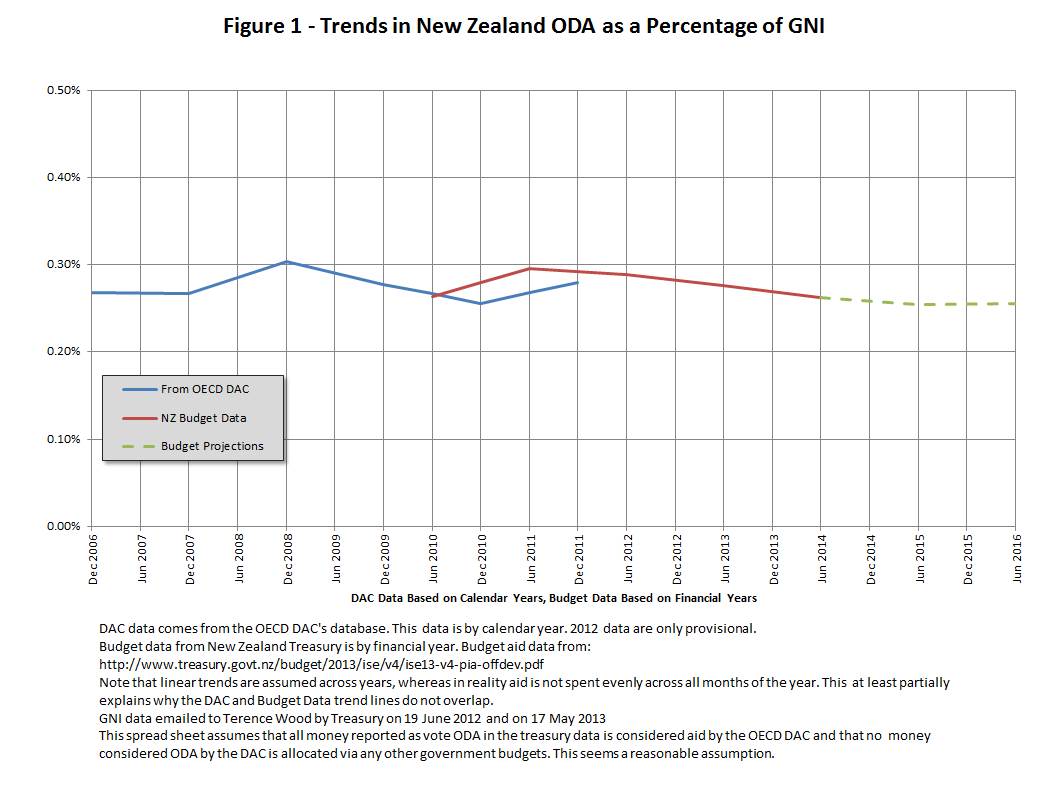 As a percentage of GNI, New Zealand aid is still higher than it was for most of the 1990s and the first half of the last decade. And the government does deserve credit for at least coming close to maintaining the ratio. But looking at Australia’s efforts (see the rising black line in the last chart in this post) it’s clear that New Zealand could be doing better. It’s true the New Zealand economy is sluggish and the country is running deficits, but deficits are also present in Australia, our aid spend is small compared to total government spending, and the fiscal forecast is improving.

A careful read of the budget numbers hints at other causes for concern too. Figure 2 charts aid budget data in non-inflation adjusted New Zealand dollars. In its first term, when it abandoned the global ODA as a percentage of GNI metric, the National Government offered as an alternative target $600 million NZD by 2010. This is a target that has never been met. Indeed, as Figure 2 shows it is now only projected to be met in the 2015/16 financial year, and when one considers the increase in ODA required for this to happen, in contrast with the almost entire absence in increases in preceding years, even this looks unlikely. 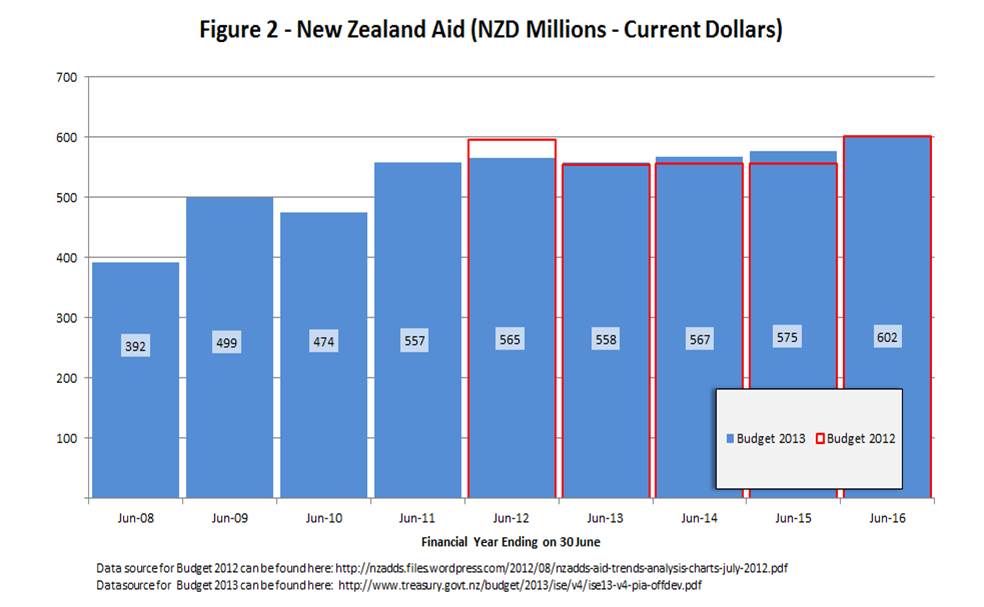 Figure 2 also illustrates the projected amounts from last year’s budget: these are the red boxes (while the blue bars are the 2013 budget). As you can see in the 2011/12 financial year the aid program ended up spending approximately $32 million dollars less than anticipated. This is a big underspend, and the good news, we guess, is that it has been rolled forward into the new three year budget allocation. The bad news is that effectively it is the source of almost the entire growth in New Zealand aid over the next two years.

The underspend also begs the question: how did the aid program end up so far underspent? This isn’t the first time this has occurred, although it wasn’t a problem the aid program routinely had prior to 2008. It is something that has arisen since the change of government. The most likely explanation, we think, is the Minister’s reluctance to sign off on the aid program’s high-level allocations (agreement on the share of the annual aid budget different countries or regions will receive). One year, while one of us (Terence) was working for the aid program, it was not until close to the middle of the financial year that sign off was granted. Needless to say, it is very hard for the aid program to fully spend in a financial year if it doesn’t know how much it is allowed to spend in particular countries. Curious as to whether this was still an issue in 2011, Jo sent an Official Information Act request to the Minister’s office regarding sign-off dates. His reply was that there was no such thing as sign-off dates. This, to put it kindly, is rather implausible. So Jo appealed his reply to the New Zealand Ombudsman’s office, and is awaiting a ruling.

Which brings us to the other source of our trans-Tasman envy. While Australian budget documents afford detailed data that allows considerable aid analysis, in New Zealand these days we get little more than the headline figure. We can see allocation to overheads and the multi-lateral versus bilateral split, but that is about all. Nothing, for example, at the country level (although a little bit at a regional level). Fortunately, the aid program itself is still doing a good job trying to be transparent, and greater detail on spending is available in the International Development Group’s Strategic Plan 2012-2015 or on the New Zealand ODA website, and excellent work has been done with IATI data. This is great. But it all happens later in the year or after the fact, and it is not the same as getting detail on budget day. Also in terms of process and accountability, there’s an important issue in that that the budget is the only document that undergoes parliamentary scrutiny. Information in aid program documents or the website are not interrogated in the same way via our political system. This provides space for juggling in between budgets, such as  appears to have occurred last year, after the budget passed through parliament, with the probable cutting of funds to various country programs to make way for the newly invented ‘Pacific Transformation Projects’.

All of this from a Minister who, in 2009, claimed of the ODA budget: “This is public money. Its expenditure should be overseen by elected office-holders able to be held to account at the ballot box…Taxpayers are entitled to hold someone to account for efficient, effective expenditure of the budget. Under our system of government that person is me.”

We’re both New Zealand tax payers, and doubtless the Minister appreciates our efforts to hold him to account. But when we look at the data provided by the Australian government this budget and contrast it with the paucity of information on our side of the Tasman it’s hard not to feel that someone truly serious about being held accountable would be releasing more. Likewise, looking at the tiny increases in New Zealand aid, and comparing it to what you Australian’s have done, it’s hard not to feel that if we Kiwis were really serious about doing our bit in helping to fight global poverty we would be giving considerably more aid.