Since the 1984 Jackson Review, there have been calls for the aid program to improve how it communicates and engages with the Australian public on its work, and on development issues more broadly.

“The Committee… believes a significant initiative in the development education field is warranted. In addition, a much greater effort in informing the public about Australia’s program is proposed.” (1984 Jackson Review, p. 236)

“The Committee believes it is not only legitimate for public funds to be used to inform the public about the aid program, but AusAID has a responsibility to do so” (1997 Simons Review, p. 295)

“It is worth reiterating that public communication and public engagement are not peripheral add–ons to the aid program. They are an investment in a solid, long–term foundation for it” (2011 Aid Review, p. 310)

The Simons Review was the first to make a clear recommendation on this front, and dedicated a whole section to discussing it:

Recommendation 19.1: AusAID should adopt a more open and transparent approach to public information and ensure that its information activities are guided by the object of public accountability.

This was followed up in the 2006 White Paper, which articulated the need for building public support for aid, communicating the success stories of Australian aid, and improving information activities in recipient countries.

“During the consultation process for this White Paper, observations were made that, while the Australian aid program was achieving impressive results, AusAID was not maximising the opportunities to capture its achievements and share information with the Australian public, stakeholders and development partners.” (p. 73)

Fast forward to the 2011 independent aid review, where there was a whole chapter on public engagement (Chapter 17) and recommendations to improve digital communications, start a blog, educate, and again do more about sharing the aid program’s achievements with the public.

But the message bears repeating. In 2016, despite constant digital developments that open up new and more cost-effective ways of reaching the public, we have an aid program that does little to share information on its work in a way that is user-friendly and easily consumable for an average Australian.

It is not clear why. The 1997 Simons report, the 2006 White Paper and the 2011 aid review all refute implied arguments that if the aid program actually wrote about its achievements, it would be taking on an aid advocacy role that would sit uncomfortably with its position as a government agency or department. But the real issue at present with Australian aid communications appears to come down to resourcing and priorities.

In a new policy brief [pdf], and a series of three blogs, of which this is the first, I will look at what has changed with the Australian aid program’s communications since the integration into DFAT (both qualitatively and quantitatively), what other large aid agencies are doing, and how DFAT can do more.

Some of the first casualties of the sudden 2013 integration of AusAID into DFAT were communications staff, particularly those who were integrated within country teams. It showed. As soon as the integration hit, AusAID’s rarely updated blog stopped all together. Stories about aid projects, international awareness days and so on stopped appearing on the front page of AusAID and then DFAT websites (see the images below comparing the former front page of the AusAID website with the current DFAT website). The aid program’s rebranded YouTube account hasn’t had a video added in more than two years (DFAT’s YouTube account has had some though – mostly from the volunteer program). The AusAID magazine (Focus) vanished. Its Flickr account was rebranded, but the flow of illustrative aid project imagery slowed down and it is now only occasionally updated, usually with humanitarian response shots (or recently, a random batch of historic photos of the Moscow Chancery). AusAID’s Twitter account, with more than 12,000 followers, was also killed off instead of being renamed, and its Facebook page vanished.

In short, many of the small gains that had resulted from an effort by AusAID to improve its public communications and to better inform Australians about aid and development were frittered away. The 2015 Australian Aid Stakeholder Survey demonstrated that this is not something that has gone unnoticed – stakeholder views on communication and community engagement dropped substantially between the 2013 and 2015 surveys. In 2013, 41 percent of respondents saw communication and community engagement as a great or moderate weakness of the aid program, but by 2015 this number had increased to 69 percent. And as Danielle Cave argued last year, letting AusAID’s social media accounts fall silent was a grave mistake not only for aid communications, but digital diplomacy, an area where DFAT lags (but is working to catch up). 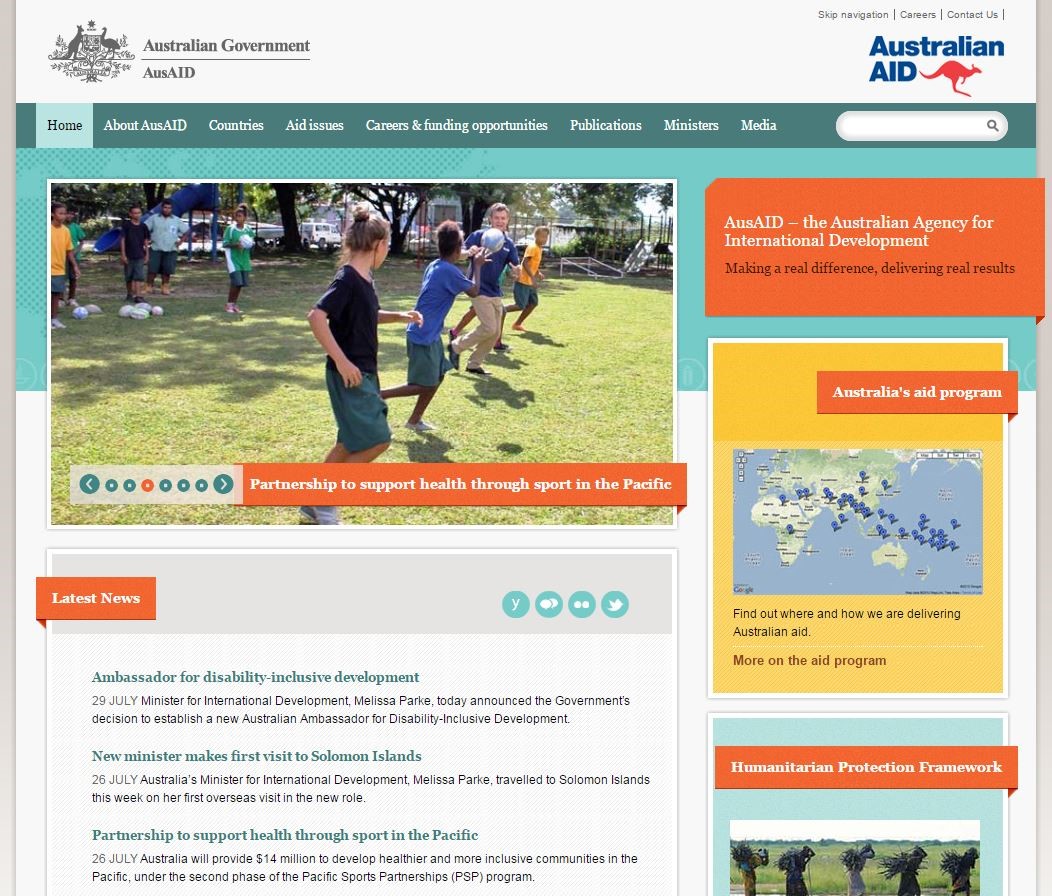 DFAT aid landing page, June 2016 – there are no stories about aid programs or outputs, just general information on the aid program. There are also no photographs of aid at work. 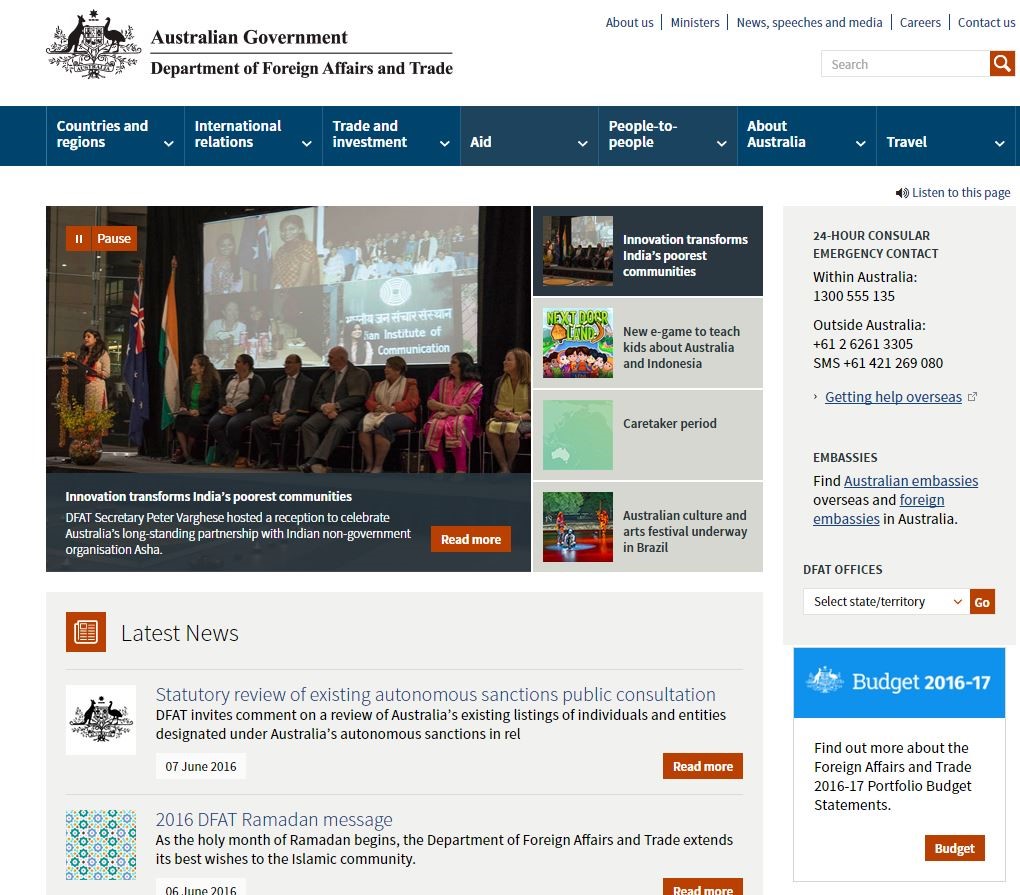 DFAT home page, June 2016 – none of the featured stories on the homepage were about aid, despite there being very recent aid stories under ‘more news’.

Some may argue that DFAT does communicate. It has a website. The website contains information about the aid program. The website has improved since the period immediately after the integration, when information on aid was nearly impossible to find.

It does communicate, but how effectively?

Though the DFAT website is not the only place to find out information about Australian aid, it is an obvious one, and in my view, despite some recent improvements, it still does a far less convincing job of meeting this purpose than the former AusAID site – particularly the dedicated Aid page, which currently starts out talking about the performance framework, a sure-fire way to have anyone besides the most hardened aid geeks hitting the back button on their browser.

The news section on the DFAT site, when it discusses aid, does it largely in detached press release mode, unless the Volunteers program, Australia Awards, or an external media outlet has written a more engaging story. (For example, the Returned Volunteers newsletter recently had a whole issue on the importance of storytelling in development – these were the most interesting stories in the DFAT news section for that month.) There are very few stories that set about explaining what the aid program does or why it does it – many are just funding announcements, or reports on panels or policy launch events in Australia. And there is nothing that places Australian aid in context – for example, no page explaining how Australian aid contributes to the Global Goals/SDGs, or other international initiatives.

In the next post in this series, I will look at DFAT’s aid communication outputs by the numbers, analysing news stories on aid on the DFAT website, and the composition of tweets on DFAT’s Twitter account.