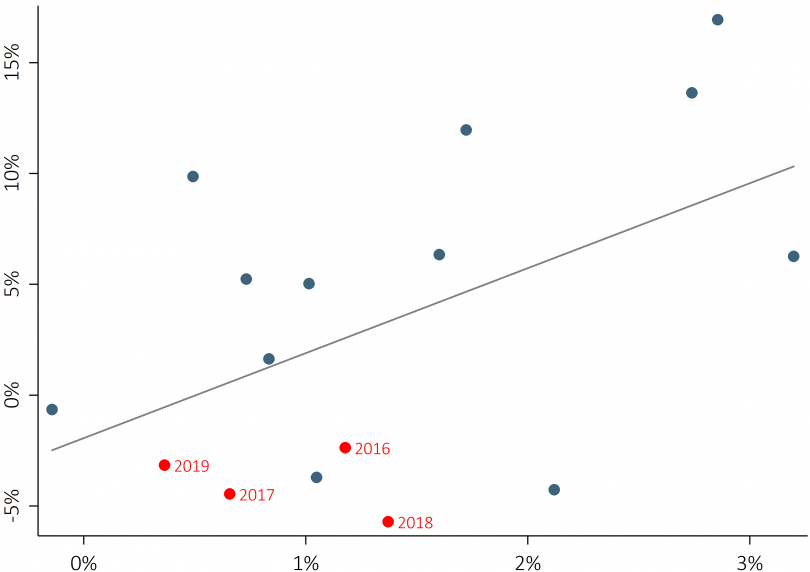 In one way, 2019 was a good year for Australia’s Development NGOs. The Development Policy Centre analyses financial data, collected annually by the Australian Council for International Development (ACFID), for a large subset of these organisations (all ACFID members as well as Médicins Sans Frontières and Compassion). And for the first time since 2015, funding for this group stopped falling. Indeed, as Figure 1 shows, funding raced up for the group as a whole, topping A$2 billion for the first time. 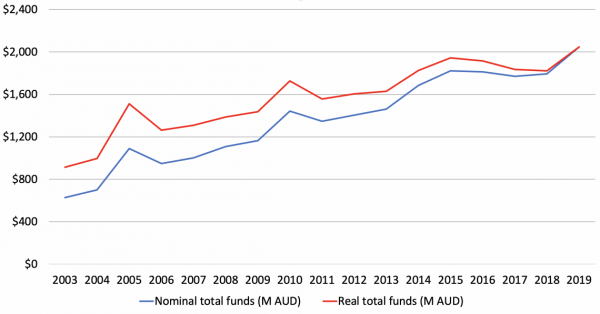 Increased funding is good, but most of the rise in 2019 came from a small increase in funding from DFAT and a few large grants from multilateral organisations (including a particularly large one to World Vision). As Figure 2 shows, donations from the public to Australian development NGOs kept falling in 2019. It seems as if community support for Australia’s development NGOs continues to wane. Although – if you’re looking for better news – the decrease was less than in previous years. 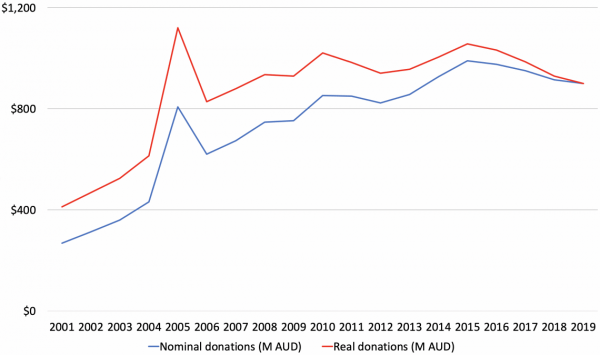 Of course, what’s true for the group is not necessarily true for every individual NGO. As I’ve shown previously, some NGOs buck the trend. Indeed, in 2019, donations actually increased for 44 per cent of Australia’s development NGOs. What’s more, as you can see in the histogram below, most of those NGOs that saw their donation revenue fall, saw it fall by less than 5 per cent. (This figure excludes a couple of small organisations with donation revenues that fluctuate wildly.) 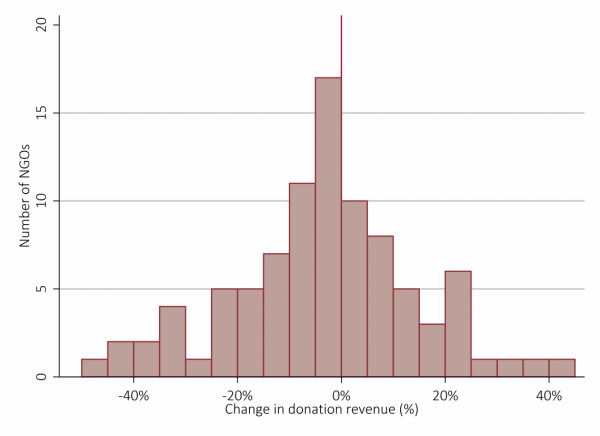 So why did NGO donations continue to fall in 2019? Much of the story appears to be to do with economic conditions in Australia. As I’ve demonstrated in previous posts, NGO donation revenue change is correlated with economic growth in Australia. In boom times, donations tend to rise. If the economy is sluggish, donations usually fall. You can see the correlation in Figure 4. (For those with a particular interest, the p-value in the associated bivariate regression is less than 0.05, and the relationship is not driven by outliers. 2005 and 2006 are excluded because the impacts of the Indian Ocean Tsunami obscure the broader relationship.)

Figure 4: Relationship between change in donations and economic growth 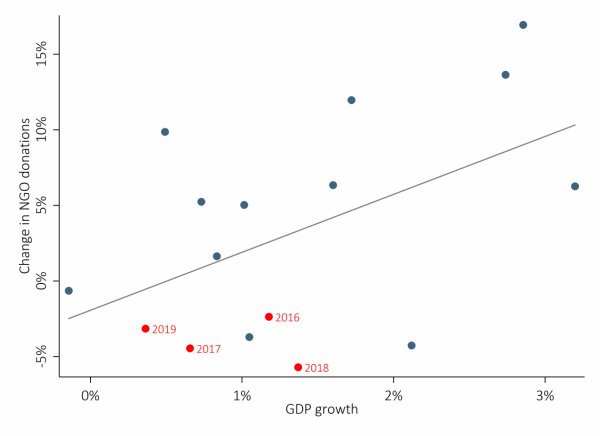 Beyond the general correlation, the chart reveals something useful about recent years. Three of these – 2016, 2017 and 2018 – all sit well below the line of best fit. That is, they are years in which donations were worse than expected, even taking into account economic conditions. 2019 is also below the line of best fit, but in its case the gap is less; poor growth in Australia seems to be the source of much of the drop in donations in 2019.

This finding is encouraging in a way. The fall in donations was less dramatic in 2019 than in the two years prior, and this is true even though the economy barely grew. Natural disasters overseas, and associated humanitarian appeals, don’t explain the slightly better than expected performance in 2019 either: 2019 was a comparatively quiet year for emergencies in developing countries. It was, on the other hand, an awful year for disasters in Australia itself. Above and beyond their influence on the domestic economy, droughts and fires on the home front must have lowered people’s propensity to donate internationally – there were plenty of domestic causes to give to. When all of this is taken into account, I would say that most Australian development NGOs actually did quite well with donations amid the very difficult year that was 2019.

Of course, there’s slim comfort in this particular finding. 2019 may have been difficult, but 2020 has offered no respite. It’s hard to imagine NGO donations holding strong in the face of coronavirus, associated lock downs, and people’s economic travails in Australia. Maybe the fact that hostility to government aid has not risen in 2020 offers some cause for hope. Perhaps it signals that, in this current moment, Australians have a real appreciation of the need in developing countries. Maybe this will help with donations in 2020. I hope so, but I’m far from sure. In the meantime, we’ll have to wait until next year’s data to know for sure.