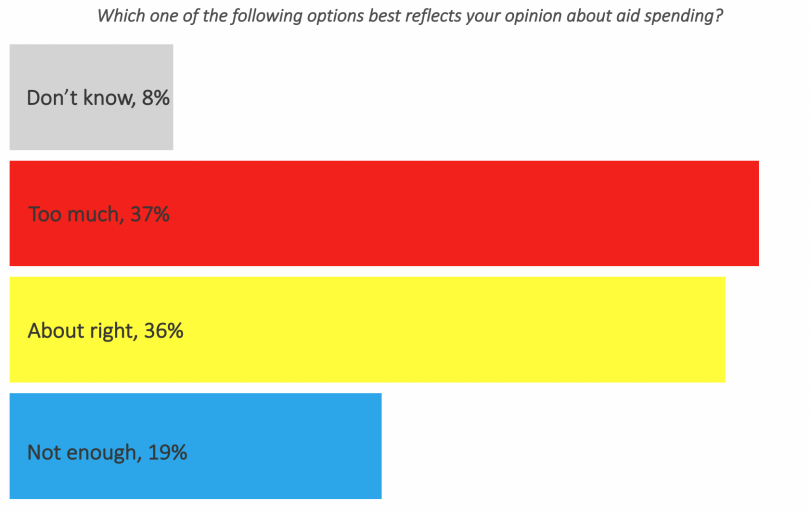 Have the past few months of economic hardship caused by COVID-19 made Australians more hostile to their government giving foreign aid? New survey data provide a surprising answer to that question.

It’s easy to think of reasons why Australians might have become more opposed to aid. Thanks to COVID-19’s impact on the domestic economy and stimulus spending, the deficit is rising fast. Unemployment has risen, and people still in jobs face increasing uncertainty.

At the same time, it’s possible to think of reasons why support for aid might not have fallen. Aid is a very small slice of federal spending. The aid budget has no material impact on levels of Australian government debt. And as the pandemic takes off in developing countries, the need for Australian aid has never been greater. Even an Australian who didn’t care about people outside the country’s borders might be motivated to support aid in this moment too. They might see the need to counter China in the Pacific. Or they may have realised that COVID-19 is a truly global problem which needs global cooperation if Australia is ever to be free of the issue.

These are all possibilities. But if you’d asked the one of us who’s been studying public opinion longest (Terence) his thoughts last week, he would have said he guessed Australians had become much more hostile to aid in recent months. Australians tend to become more inward-oriented in tough times. Donations to development NGOs, for example, are correlated with domestic economic conditions in Australia. When the economy tightens, donations fall.

Fortunately, we don’t need to rely on guesses. Since 2015, Devpol has been surveying the Australian public on an annual basis, asking whether they think Australia gives too much or too little aid. The surveys have been conducted by reputable survey companies. In the last three years we have used the same firm: Ipsos. The surveys cover broadly representative samples of the Australian public.

We’ve just received the latest wave of this survey data. These data come from the control group in an experiment we ran (more on that in coming posts). The control group contained 763 people. The data was collected between 21 May and 21 June 2020. The survey question was:

Every year the Australian government gives aid money to poorer countries. Currently just under $1 out of every $100 of federal government spending is given as aid. Which one of the following options best reflects your opinion about aid spending?

You can see the results of our 2020 survey in the figure below, with confidence intervals included to give you a sense of sampling uncertainty. 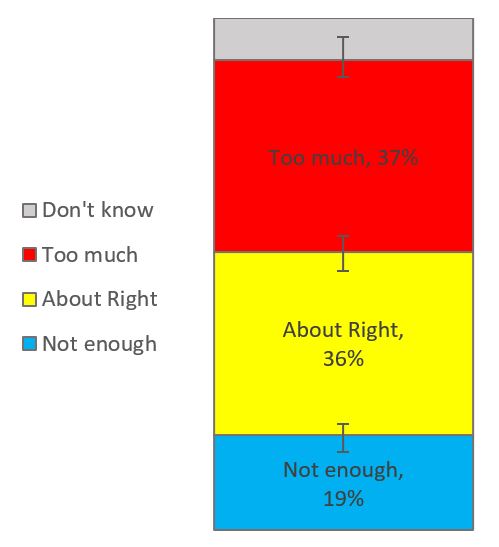 How does this compare with previous years? The figure below shows the results of the surveys we have run since 2015. (You can download the figure and underlying numbers here.)

If we just look at the numbers, the belief that Australia gives too much aid is actually lower than it has been at any point since late 2015. Likewise, the view that Australia gives too little aid is higher. These changes are within or close to the margins of error though. And while there was quite a large change between 2019 and 2020, it seems likely the 2019 survey was somewhat anomalous. The safest conclusion to draw from the chart is that there has been no clear change over time.

This in itself is a startling finding. There is no evidence whatsoever that Australians have become any more hostile to aid during the period of the COVID-19 pandemic. If anything, the share who think aid should be cut has fallen.

Possibly this will change over coming months and years, either for the worse if the economic downturn in Australia gets more severe, or for the better if Australians increasingly start thinking about the global nature of the pandemic. For now though, the surprising finding is that coronavirus and tougher domestic economic times do not appear to have made Australians more hostile to aid.

This is the first blog in a three-part series. You can find the second blog here and final blog here.