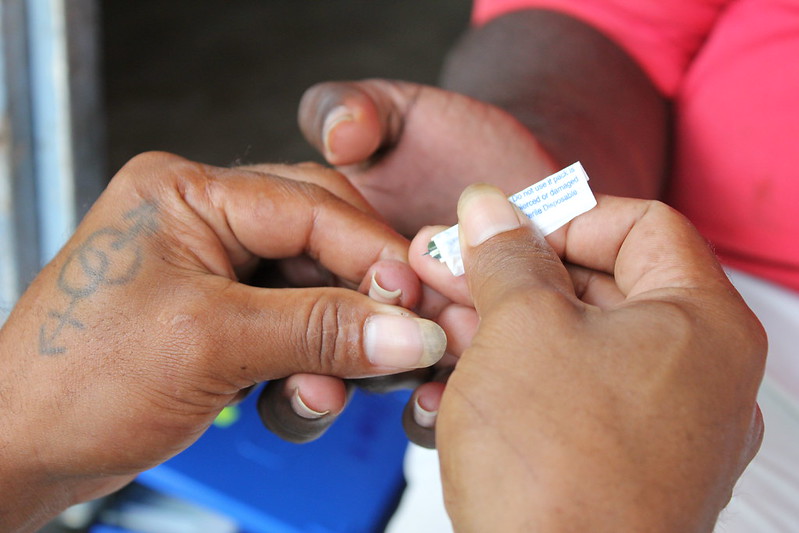 While commentators have remarked on how little attention Australia’s domestic COVID-19 situation received in the 2022 federal election campaign, discussion of the global pandemic was almost entirely absent. The pandemic did not feature in Labor’s two major campaign announcements on aid, which focused on the Pacific and Southeast Asia and mentioned health only in passing.

Despite global efforts, massive vaccine inequality persists – only 18% of people in low-income countries (LICs) have received at least one dose of a vaccine, while in high-income countries the figure is closer to 80%. The world failed to reach the target of 40% vaccination coverage in all countries by the end of 2021 and will not meet the 70% target by mid-2022, with at least 19 LICs not expected to reach this latter target before 2030. These disparities increase the risk of more dangerous and deadly variants, as well as compound the secondary health impacts of the pandemic in poor countries.

Notwithstanding the lack of attention during the campaign, these bleak statistics mean that COVID-19 and global health will feature early in the Albanese government’s international engagements. World Trade Organization members are still trying to thrash out an agreement on an intellectual property waiver to support increased vaccine production for poorer countries. The G20 health ministers’ meeting, to be held in Indonesia on 20 June, is expected to advance discussions on a new pandemic preparedness fund. This will be followed a week later by a Global Health Security Conference in Singapore, co-sponsored by Australia, which will feature global and regional health leaders, as well as former Prime Minister Malcolm Turnbull.

And later this year, the Global Fund will seek to raise US$18 billion at its seventh replenishment (2023-25) to help offset the negative impacts of the pandemic on efforts to combat HIV, TB and malaria and address the fragilities in health systems that it has exposed. This represents a 29% increase on the previous replenishment (US$14 billion) and, based on our 2020-22 replenishment pledge (A$242 million), means that Australia would need to provide around $70 million in additional finance.

Since 2020, Australia has committed around A$940 million over four years in both regional (A$623 million) and global (US$220 million/A$317 million) funding to assist with international vaccine procurement, delivery and ‘end-to-end’ support, with a small proportion of global funding also dedicated to efforts to strengthen access to COVID-19 diagnostics and treatment.

Australia has also committed to sharing 60 million COVID-19 vaccine doses with countries in the Pacific and Southeast Asia by the end of 2022, and a further 10 million doses with the COVAX Advanced Market Commitment (COVAX-AMC), a facility managed by Gavi, the Global Vaccine Alliance, which provides vaccines to 92 eligible low- and middle-income countries.

Globally, Australia’s contribution of US$220 million to WHO’s Access to COVID-19 Tools (ACT) Accelerator – a mechanism which brings together various global health organisations to accelerate the development, production and equitable access to COVID-19 tests, treatments and vaccines – represents around 1.11% of total government donor funding. Of this, the vast majority of Australia’s assistance has been for the vaccine pillar. Comparatively, Australia currently ranks 14th (out of 57) in terms of funding for the ACT-Accelerator provided by government donors. 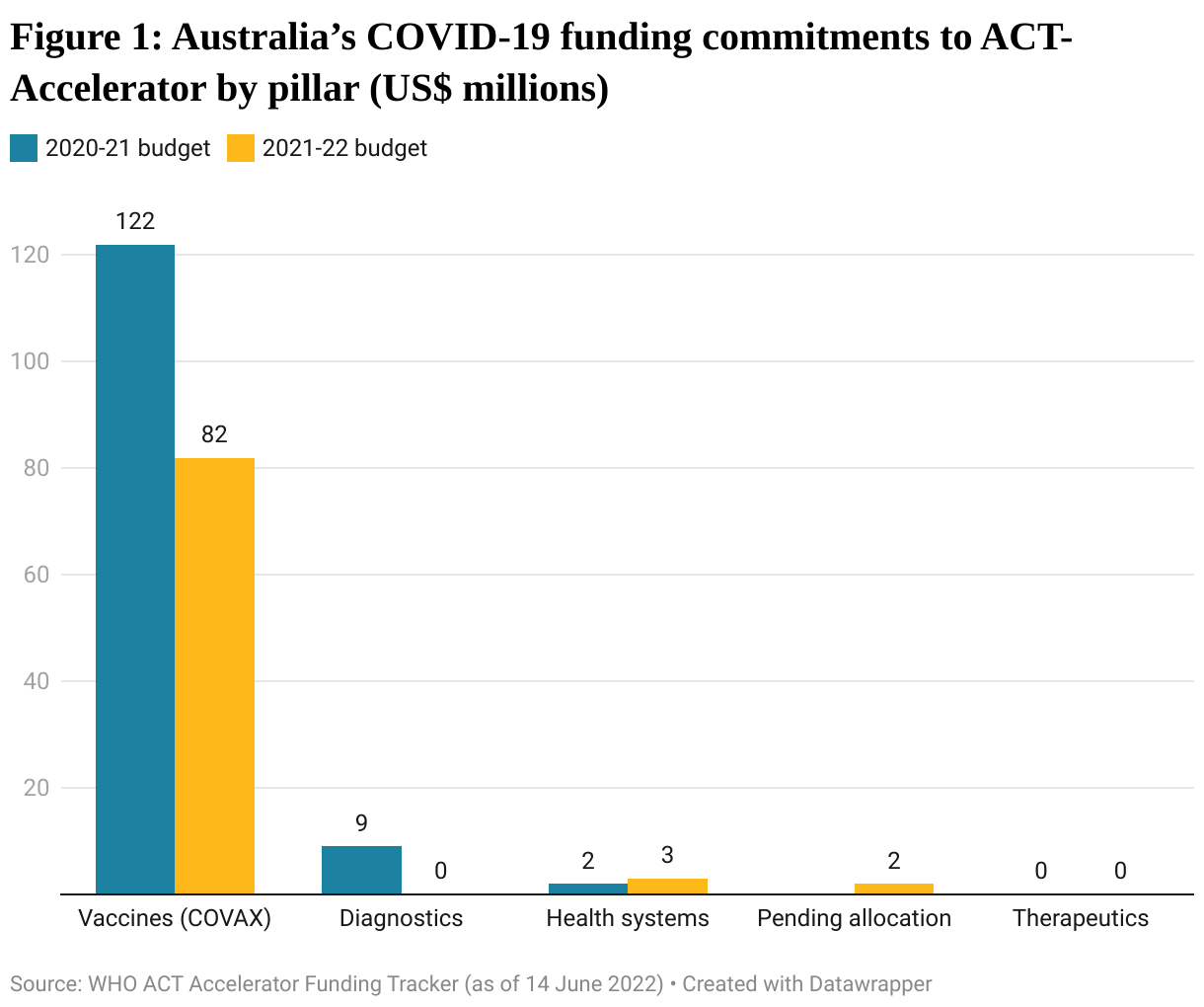 Beyond COVID-19, Australia has also provided funding to support improved global pandemic preparedness through the Committee for Epidemic Innovations (CEPI), increasing its four-year pledge from A$12 million in 2019 to A$100 million in 2022. Australia also has a number of other non-COVID, multi-year global health commitments (e.g. WHO, Gavi) which can be viewed on DFAT’s website.

It is regional and bilateral contributions, however, that make up the bulk (over two-thirds) of Australia’s international COVID-19 support. As others have argued, compared to most of its OECD peers, Australia has heavily favoured bilateralism over multilateralism when it comes to vaccine assistance and “its generosity appears among the most heavily influenced by geopolitical considerations.” This includes bilateral donations of vaccine doses to countries in Southeast Asia and the Pacific, the A$523 million, three-year Vaccine Access and Health Security Initiative, and the A$100 million Quad Vaccine Partnership.

According to DFAT’s Vaccine Access for the Indo-Pacific reporting, as at 14 June 2022 Australia has shared a total of 40.1 million vaccine doses with the region, two-thirds of the 60 million goal. Vietnam is the biggest recipient with 22 million doses, followed by Indonesia, Cambodia and the Philippines. Overall, Southeast Asian countries have received a total of 36.2 million doses, while Pacific countries and Timor-Leste share the rest (3.9 million). 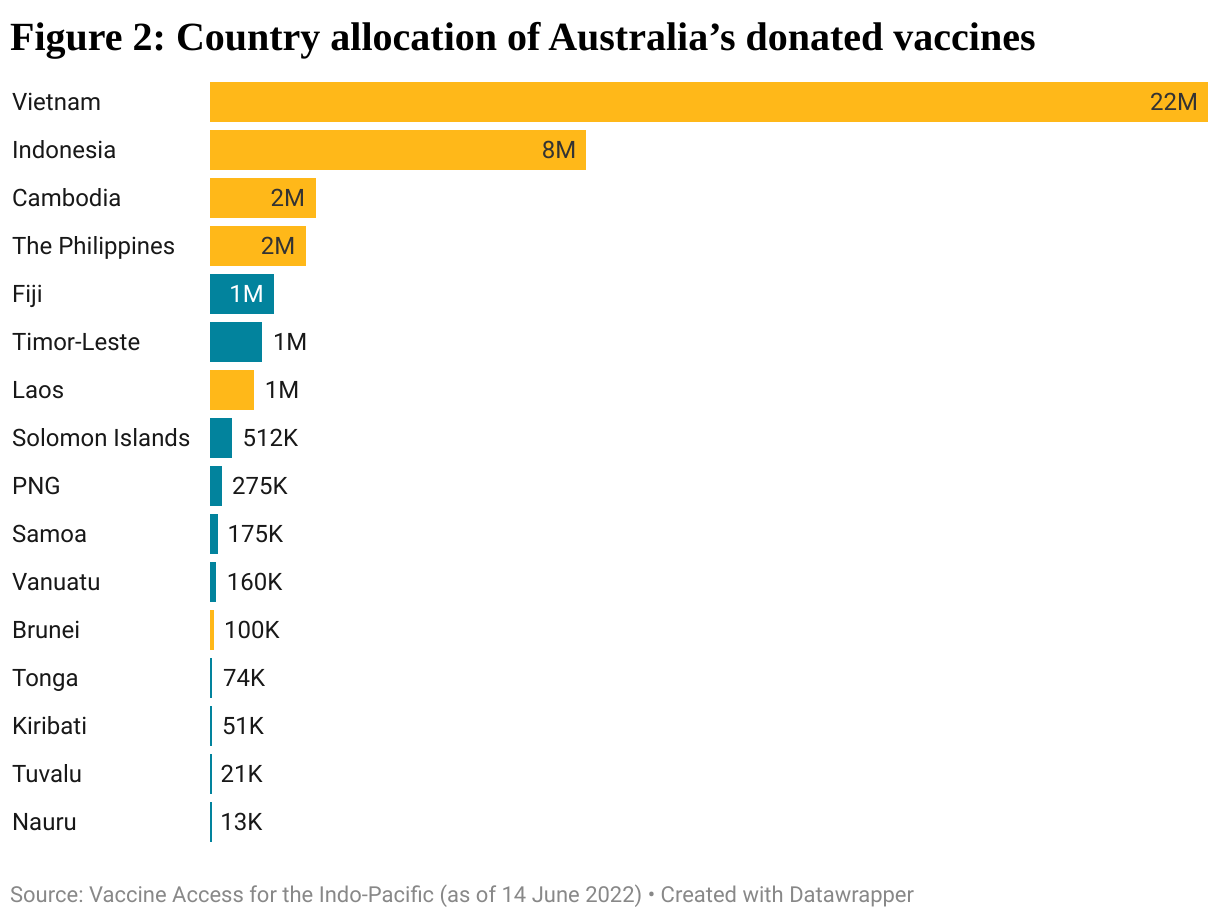 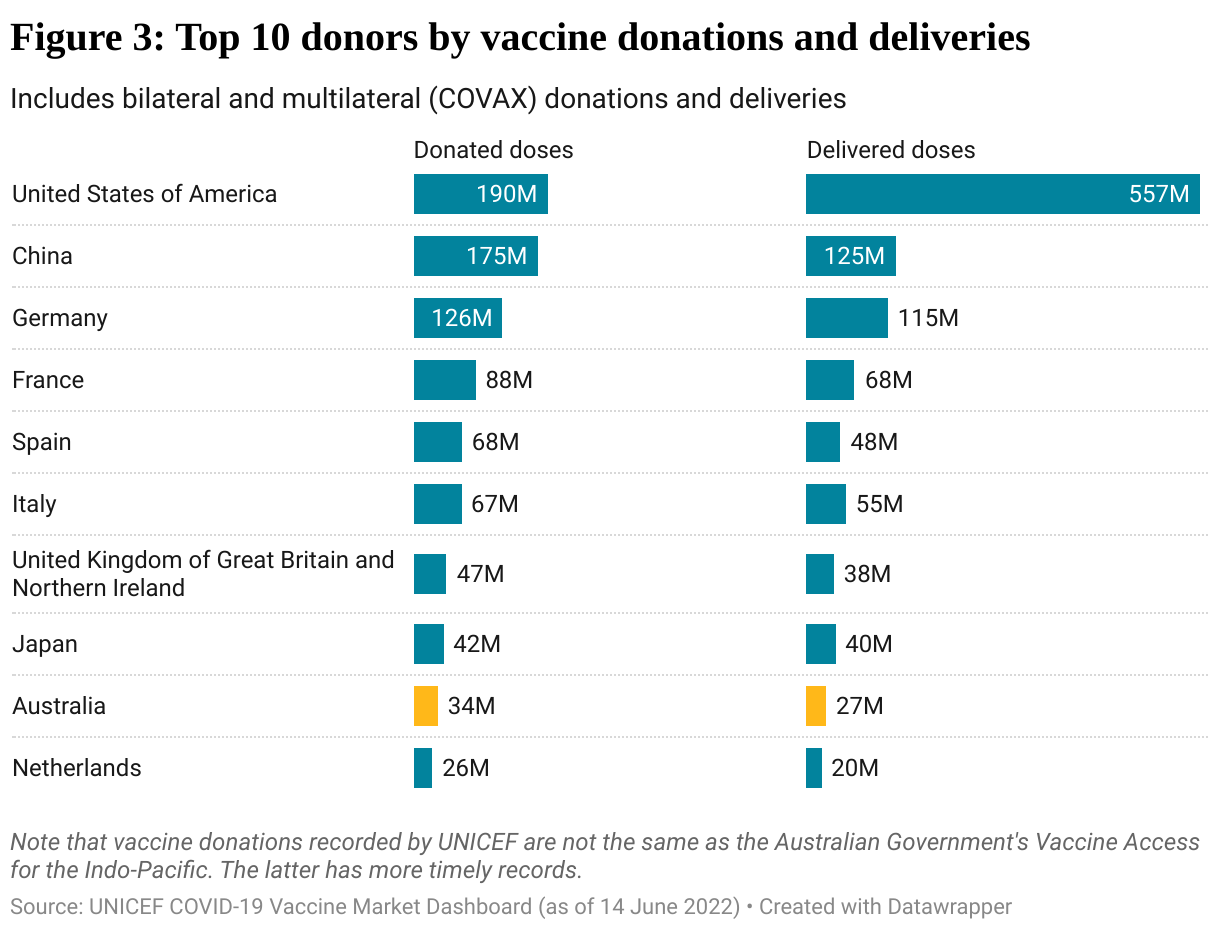 As well as funding, there are also important policy questions surrounding Australia’s future approach to COVID-19, pandemic preparedness and international health. In opposition, Labor committed to the establishment of an Australian Centre for Disease Control. Like its overseas counterparts, an Australian CDC would likely have an international component. But it is unclear how such a component might work with DFAT’s existing Indo-Pacific Centre for Health Security, for which future priorities are currently being planned.

Based on two pieces of expert-led research commissioned by the Australian Council for International Development and the Fred Hollows Foundation in 2021, Australian NGOs have called on the new government to look beyond a narrow conception of ‘health security’ and adopt a more integrated, long-term approach to regional health systems, with a focus on primary care and local health workforce development. This would entail the re-establishment of multi-year, bilateral health programs in Southeast Asia as well as more support for fragile health systems in the Pacific.

When the Coalition first came to power, it cut health aid funding drastically, but then restored funding in response to the pandemic. With the pandemic now in its third year, and a clear need and demand for more support from Australia, the prominence of health in Australia’s development assistance program is only likely to grow.

We have updated the COVID-19 funding and global commitments data on the Australian Aid Tracker website.